About ReWire - what is the future of DAW to DAW connectivity?

I kind of tried to make a topic about this on Gearsluzt, and I kind of got nowhere. Reason 11 and beyond no longer support ReWire. I’m guessing ReWire is now basically Ghostware…

What is the future of DAW to DAW connectivity?

However, some of us who are using Renoise, do actually ReWire into Cubase Pro (in my case, specifically version 9.5).

So what is the future? I know this might be a few years, before it actually matters.

I have sometimes rewired with reaper because of reason vst and piano roll. Now i havent reason anymore and a piano roll is confortable but not to important for me. If i have in the future reason again, there will be surely renoise 3.3 with vst3.

Rewire is by propellerhead/reason, they dont have it anymore, it will die!?

depends on whether you intent to use it to sync daws? to route audio only? or else.

do you know about jack?
https://jackaudio.org/

it works under linux (among other platforms). It is basically virtual patchbox/interface.
Your creativity is the limit. You can practically create whole virtual cabling system under your PC using your internal/onboard sound interface.

Audio wise - i have no bad things to say about.

ps; i simply love routing renouse separate tracks to separate tracks to mixbus32c and just mix - i create simple loops, whereas i could blend it so good, that i do not need renoise beside sequencing & arranging. I wish renoise had option to act like only as a sequencer, where it would use by nature jack routing to other daw. This could be priceless, but is doable also so i do not mind!!!

okay, i’ve had to upload my quick demonstration: 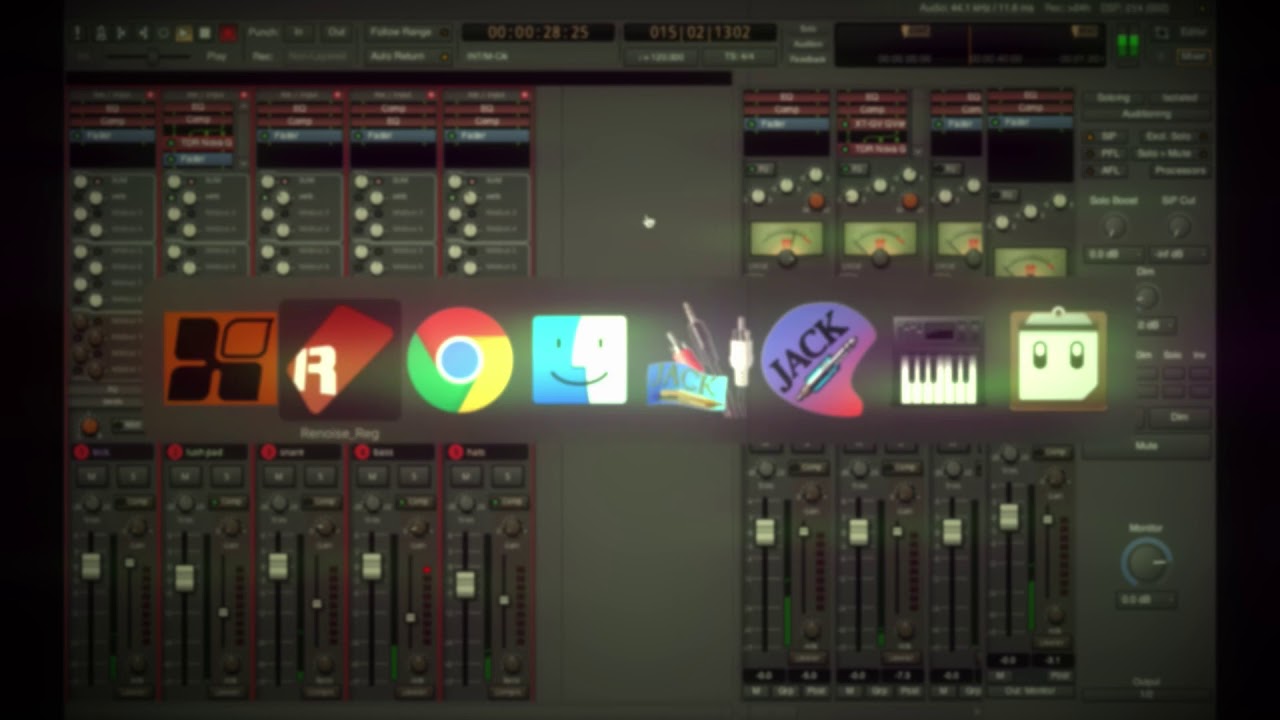 (re-uploaded video since i’ve exported the thing with the sidechain off when exporting from mixbus - TDR Nova had sidechain input from renoise)
1 Like
2_daze_j (Jonathan) June 23, 2020, 2:32am #4

I mean, tbh, I suppose with what I am doing, I could just as easily, "render to disk, and save each track in a separate file, and drop em into Cubase.

Eventually, I really want to record some vocalists for my music, and that’s what I am sitting on Cubase for anyways… But my productions are all Renoise…

And now that I am thinking about, if and when the time comes, I suppose I can just render each track to a separate file. I am wondering if that would give a tighter result than ReWire anyway. In terms of, “the clock.”

MixBus is nice software btw. That’s cool you mix down with that…

As long as Cubase doesn’t drop ReWire support, it will still work. I guess Reason no longer wants/needs it because of its VST3 plugin. We also have no plans to drop it.

It would be cool if Renoise and redux supported the ARA format. It could be used as the same celemony melodine.

Rewire is a piece of cake compared to JackAudio.
Jack is a great environment if you have time to experiment, patch or tweak but it’s nothing straight forward.
I’ve been using Jack on windows a lot at some point, to “sandbox” soundbanks and synths in Cantabile and have a “streamlined” midi sequence DAW session (studio One) without any embedded vst instrument, by that time S1 was crashing more than often when high on load.
Eventually, I could achieve and optimize workload between apps but Latency was a huge problem (adding up from app to app, no compensation), midi clock never too tight and communication from virtual ports to other ports would be tedious to set up correctly, nothing as user friendly as rewire can be.

Ableton Link is keeping apps/device synced up in a very simple and intuitive way, on IPhone/IPad especially, and now with Reason and Bitwig.

Late to the party, but I have a somewhat working replacement that is far easier than messing around with jack audio drivers.

Just download the Reaper free plugins, specifically reastream. Load reastream vst in daw, give it a name, select local network. Open in another daw, have it receive on that name, and presto, you have audio between daws and you can route as many channels as your system can handle.

For midi, free loopmidi drivers here. Works like a charm now. I can run audio from non-rewire apps like bitwig to renoise, cubase and route midi by selecting a loopmidi device in my daw

(Aside, I like to run bitwig into other daws for lots of reasons: eg in BW I have 4 instances of kontakt on an x-y grid all being auto crossfaded between each other. With loopback midi out of cubase I can play bitwig device chains just like another instrument in my cubase project. Frequently, I’m running renoise at the same time into bitwig so I can do proper sidechaining, recording loops etc.)

I think ReWire is a fantastic invention but It’s missing some things that would make working with two DAW’s a lot easier - like the fact that only the ReWire host controls global variables like tempo, time signature, etc. An example of this would be ReWiring Renoise as a ReWire slave into a host DAW and having tempo change pattern commands throughout your project - they will not work unless you change the tempo on your host DAW.

TL;DR ReWire is a great thing, but it needs some work to truly bridge the gap between separate DAWs.

S1 doesnt even get off the starting grid for my requirements. No surround sound for starters, lackluster MIDI editing, no virtual reality support. I could go on for hours.

Who knows how long S1 will support ReWire? PreSonus.

Already use it for some things, but I’m a major tracker nerd, that’s what I came up on. Not having full Renoise wouldn’t be great for me. Love Renoise!

Does cubase offer other ways to sync playback? Like that new method from Ableton, ‘ableton link’? Now supported in Renoise 3.4;
https://forum.renoise.com/t/renoise-3-4-0-redux-1-3-0-released/

No Ableton Link support, unfortunately, that would have been very cool.