Can't get Renoise to play second of two patterns

I’m just taking my first steps with Renoise (previous experience was years ago with Octamed/Soundstudio), and am mucking about just trying to learn the controls in Renoise, which is considerably more complex (and capable!) than what I’m used to.

I’ve successfully cloned the first pattern that I made with a basic drumkit and bass line, and in the second patter have added an organ playing the main tune. So now I want to hear Renoise play both patterns so that it starts with drums and bass then the organ starts up… - and then I can think about starting work on my third pattern.

If someone could give me some idea of what the heck is going amiss here, 'twould be much appreciated. 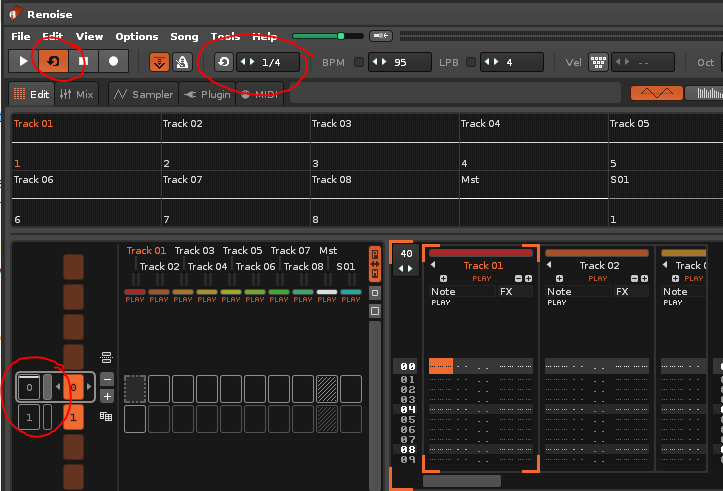 Many thanks! It was the Sequence Loop. I couldn;t even see anything different there until your pic above gave me a clue as to what might be amiss, it’s not exactly easy to spot! My but the UI in Renoise is ‘twitchy’ - very easy to accidentally switch things on without having a clue as to what’s going on. I wish there were a ‘light’ version to learn the basics on that had a more obvious UI (and less functionality to go with it). Not sure if I hadn’t already had Octamed experience that I’d persist with this. As is though, I shall press on! :-}