I want to correctly describe the intervals, counting up from the root note to each of the scale degrees in the diminished ( whole - half ) scale. This is what I have so far, I’m not so sure if its right.

I used flats because the scale degrees have been flattened in the scale formula.

There are 8 notes in the scale before the octave so I cant describe the intervals just as intervals numbered 1-7 as usual.

There must be one double number. Also there is a double lettered note name ( ‘Ab’ AND ‘A’ ) which is unusual.

Diminished 7 is the right name for the A in this case.

( If you were playingC°7chord the A would the 7th )

Its a weird one.

Naming ‘A’ as diminished 7th would lead to interval naming ( from root note to each scale degree ) including two ‘7’ intervals.

After some time had passed I looked back at the scale formula ( 1 2 b3 4 b5 b6 6 7 8 ) and noticed that there is both a ‘b6’ ( flattened sixth ) and and ‘6’ ( Normal / Major sixth ) so instead of using diminished 7th, I went with Major sixth. Diminished 7th and Major 6th intervals both have 9 semitones. After changing it it looks like this ( I put number of semitones in this time around, in the second row ):

I don’t know if there is any logic to it at all, but at some point in time classical people must have decided to ‘double up’ the sixth interval in diminished scales ( rather than any interval of their choosing ). This is my assumption based on looking at the scale formula.

They want to describe everything in terms of 7 scale degrees because it fits nicely with their traditional view of music ( the seven modes ).

As diminished has 8 scale degrees before the octave, rather than seven, it was probably considered to be devilish or something. 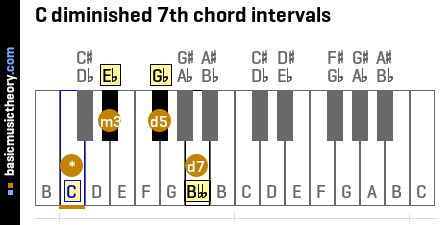