Earlier this week, I picked up a new desktop (5820k, 980ti) and a 27" display (Asus PG278Q). It’s a nice machine and a beautiful screen, but I’m struggling a little with the 2560x1440 resolution. In some programs, like in Renoise, GUI elements and text are just too small for my less-than-perfect eyesight.

Windows 10 has a setting to scale the screen (curiously, it doesn’t have settings to individually scale just text or just icons, which I think previous versions offered), which I set to 125%. This works fine with some software (like Firefox, File Explorer), and not so well with other programs where everything is displayed blurry and fuzzy (like Renoise, Steam client, Device Manager).

In case of Renoise I worked a bit around this by going into the compatibility menu (shortcut) and selecting “disable display scaling on high dpi settings”, and going with “huge” fonts in the Renoise preferences. This helps, but the font and elements in the Renoise menu, effects devices, instrument selector, disk browser, channel headers, etc. remain very small (sharp, but tiny). I can read the text, but it causes more strain if I’m a reasonable distance away from the screen, i.e. not three inches in front of it.

Is there anything that I can do to improve this, or is this just how it is? 2560x1440 isn’t that obscenely high a resolution, and I’m not sure what I’d do on 4k when that finds its way to me eventually. I hope it’s just something I’m overlooking or don’t know about. (In comparison, the new vectorial GUI of FL Studio works superbly well in this resolution, but I use Renoise substantially more often.)

You’re absolutely right - the Renoise UI is not vector based and only the pattern fonts are scaleable.
The vector-based UI is something that is brought up more and more, and definitely something Renoise should consider as well.

The last screen I bought happened to be a multi-touch monitor. A real shame that OSX doesn’t support this feature, because then such an upgrade to the UI could also bring improved touch support “across the board”. But still, a very interesting addition for e.g. mixing tracks.

+1 to danoise. Now is really the time to start making the UI scalable imo. The trend has started with FL studio and Studio One for example, and I suspect it will be an expected feature in all new music software within 2 years or so. I hope this feature of Renoise will be made independent of the DPI setting in Windows (Studio One is horrible in this regard).

I just installed the demo version of Reason 8, and it’s very difficult to use even on a 15" monitor at 1920x1080. Renoise is still usable, but using it with any higher pixel density would be a stretch…

Thanks guys! I imagine this is probably on the to-do list already, then. I had hoped there was a workaround, but hopefully better “scalability” will come our way in time.

There’s a free little program that fixes the DPI problems on win10. Might be worth trying that

Hope im okay to link this? 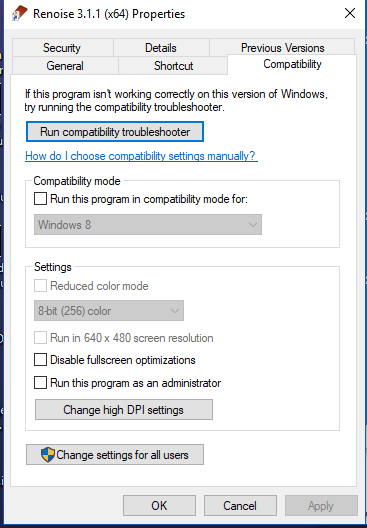 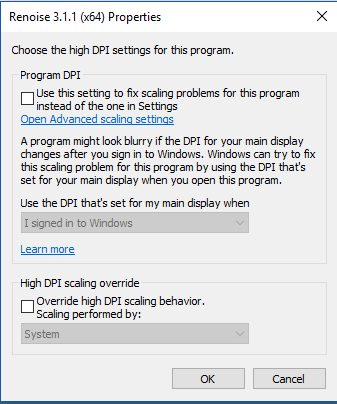 I’ve used the HighDPI scaling mode for some apps that have teeny fonts by default.

I just hooked this 2560x1440 up to a MBP, it looks fine and what I’d expect, actually I hope it will be the same on the Hackintosh I’m building.

I’ll test with Windows 10 in dual boot afterwards, but if windows 10 is different, wouldn’t it be possible just to apply the Retina fixes to this resolution regardless the OS?