I Am Back Btw

from holiday. was nice, saw switzerland, went to italy (which reminded me of czechoslovakia for some strange reason) and drove on an austrian highway without paying for that sticker (scary 30 minutes).

Some like it… Eh… Dangerous? Nice to have you back.

As you might see, I never left. And never will… BWAHAHAHAHAHAHAHAAAA!!

you went to Switzerland and didn’t come to Buenzli?

oh man you are really… human

well, I was there with my girlfriend and da kidz™ … so no geek-stuff for me

Eh?? What?? I’d better watching out of my window, maybe I’m living in Prague and I never realized it… Ok, no no, it’s Italy…

Hum, well, I live in Oslo, the capital of Norway. Which many people mistake for being the capital of Sweden, or even of Stockholm! So somebody must be confused here or something. I think.

And most people outside Europe think you come from Switzerland when you say Sweden.

Hum, well, I live in Oslo, the capital of Norway.

Well, I live in Stockholm, the capital of Norway… and Sweden I guess…

Isn’t Oslo (former known as Kristiania) just a pot-smoking district of the capital of Denmark or something…?

Twilek, YOU my friend are living in some century way past I think…

But yeah, Oslo is some danish-wannabe potsmoking capital indeed. But I like it here! And I don’t even speak danish. Or smoke pot.

Twilek, YOU my friend are living in some century way past I think…

Oh yes, now when you say it I actually remember: Norway has not been a part of Sweden for almost 100 years… hmm. …

Hehe, tho it feels like it, cos of all the swedes who come to work here EVERY summer, it’s like a plague, only kinda nice!

Any other countries here who get summer visits from their neighbours who come to work, cos it pays better in your country then their own?

Man, Italy is a big place… with HUGE differences from one place to another… (Look at the geography to see what I mean)
WHERE is it that you went, exactly?

I was at the lago maggiore, the swiss side, and we went down the lake one day, into italy. I cant remember names of the cities/villages we were, but it was not far (40 min drive or so). The reason why it reminded me of czechoslovakia was simply the sometimes very crude mixture of old and new buildings. I did walk down the street and came by three great looking houses from the early 1900s und next to them was a terrible concrete-block done in the 60s, followed by a huge mansion from 1800-something, and it looked just awkward to see this highly mixed architecture.

and it looked just awkward to see this highly mixed architecture.

That’s the spirit of the age

I see what you mean

My perception as an Italian is that this is what happens anywhere on the expanding urban territory.
The places where you can’t really build more in… are generally surprisingly suspended in time (Venezia just to name one)…
I am just back from a short week spent camping in Liguria… practically at a minute from Tellaro (middle-age shaped town by the sea) 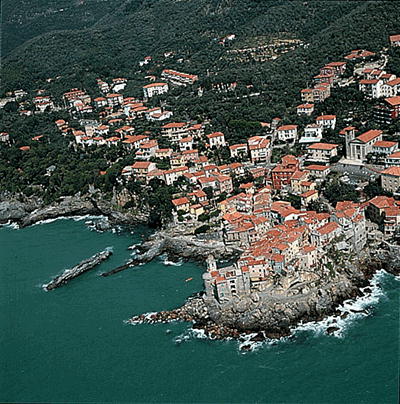 On the other side of the “Poet’s Gulf” is Portovenere, another place I’m used to visit every now and then.

as you can see, there is no place for any construction at all… so everything remained almost unchanged since then. Like it happens in Riomaggiore… a small town built directly into a giant crack in the side of mountains facing the sea because of a river flowing down there. It’s virtually impossible to reach those places with anything bigger than your own legs.

I am sorry, I really did not mean italy in general, just the area I was, and the reason why it did struck me so much was that it looked very different on the swiss side. There were new building too, but they kinda blended with the old ones, whereas on the italian side some buildings looked completely out of context there (as said, mostly those 50s/60s concrete blocks) … but as I said, its nothing “negative” or something, I just noticed it, and most of the buildings (on both sides of the border) made me go “gosh, I need to work and get money and buy me one of these sometimes.”