As requested by @tkna I have added a new key-binding called Repeat last command which will run the last command you have executed.

Additionally there is a command history that you can traverse by pressing the up arrow (similar to terminals).

I have added what you can see in my previous post.

The problem with supporting hexadecimal input is that the palette wouldn’t be able to tell the difference at the first digit between a hex value (for example B) and setting the bpm command B.

Nevertheless it would be cool to allow hex. Maybe if I make the letters easily configurable or have an alternate keymap for hex-mode which excludes letters from A to F… I’ll think about it!

The history function is also a nice touch.

As for the line number hex, if the tool can read the Renoise configuration, it may be natural to set it automatically. 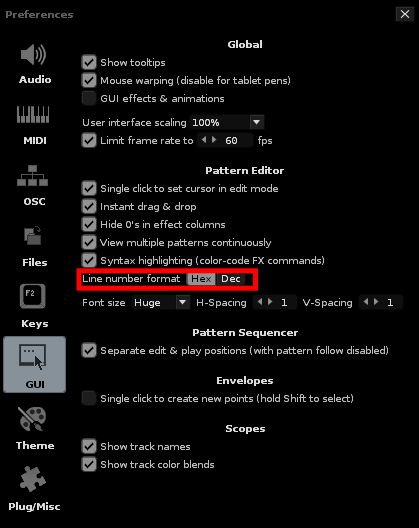 Otherwise, it may be possible to use an optional command (e.g. :) followed by an option (e.g. line_number_format hex).

Edit:
If you are considering eliminating a-f from the default command system for hexadecimal input, it may be easier to design a new command system and then make the change at an appropriate time.
Personally, I prefer lowercase-based command names, as they reduce the number of keys to press and the cognitive load.

Hey thanks so much for this @Useless As someone who lives in vim, this tool has made renoise much more fun to use