Nudge option in the Advanced Edit

Yesterday I received a question from a new japanese user.
He seems want to move a whole track data up or down.
So I replied that he should use Nudge function in the Advanced Edit panel.
(i.e. set “Track in Song” and nudge “400” or so.)

But he replied again that when note data go over pattern boundaries, the data disappear,
and I also confirmed the behaviour of the Nudge function.

Well probably, it may be a safety solution for the tracker’s “Pattern based sequence” though,
it’s a bit strange and troublesome in such case.
As a result, he was forced to correcting each pattern data manually.

Perhaps this person could try the Rotate Pattern tool in the meantime?

Yeah, he already found the tool before asking me.
But even using this tool, note data cannot exceed pattern boundaries. 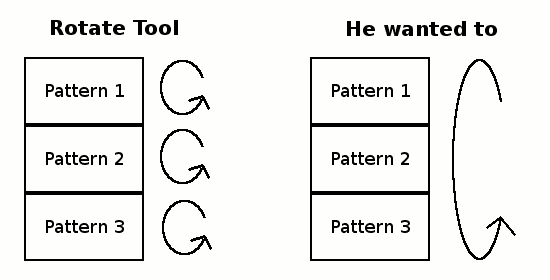 Well, I know that Renoise’s sequencer is quite complicated,
for example we can make sequence including same patterns like [0]-[1]-[1]-[2]-[2]-[1]-[3]…
so I understand it’s hard to move note data over pattern boundaries when nudging.

But if possible, it’s better to add something like a limited option which simply can nudge note date to the next pattern (on the premise that the song consists of unique patterns only), I think.

Kind of a bug in my eyes. When there’s an option to nudge the “Whole Song”, one would expect the data to cross pattern bounderies.

Bug? I would hardly call it a bug, sounds more like a specialized feature to me. Could be handy now and then maybe, but isn’t this tool material?

Bug? I would hardly call it a bug, sounds more like a specialized feature to me. Could be handy now and then maybe, but isn’t this tool material?

OK. Maybe not a bug. I just mean that I would strongly expect it to work that way.
As it works now, it’s an “All Patterns” function, not a “Whole Song” function. “Flip”, by contrast and properly, is applied to “Whole Song”, not “All Patterns”. A little inconsistent at least.