Another reason is that VST2 officially is deprecated and bigger companies tend to only support VST3/AU now.

This is my primary concern. Can’t fuel my GAS without VST3!

I’ve seen so many unresolved technical arguments debating whether there are performance gains / CPU efficiency with VST3, I decided to judge for myself.

I took full/pro or full/pro trial versions of every modern DAW in Windows I could find supporting both VST2 and VST3, as well as several that are VST2 only, and went through dozens of plugins I own or use regularly, using songs I was actively writing, to evaluate across them.

I can’t tell you the technical reasons for what is happening on the back end or between the DAW and plugins, but I could easily see that the performance / CPU efficiency of VST3 in general was just better.

I this is actually highly relevant to a tracker like Renoise when working heavily with plugins (like I do), in part because of the default note/plugin cut-off design. I’ve frequently caught plugin effects processing heavily in patterns on empty tracks with no audio, or generators that continued even after explicit note cut-off in Renoise that I don’t see happen in typical midi-roll implementation in other DAWs. Again, I don’t know all the technical details, but it seems the VST3 api is designed in a way that helps/forces managing inefficiencies like this.

Another benefit directly affecting my creative process is audio-routing / side-chaining support between tools. Being able to use tools like Meldas Morph to blend audio signals requires multiple audio signals routed from two or more other sources. When I’m writing music for a film, I need creative functionality like this. While I have used DDMF’s meta plugin to accomplish this, the performance hit to do so in conjunction with everything else has many times left me in a situation where CPU pegs out and Renoise stops, no matter how efficiently I attempt to use effects and generators, even on relatively high horsepower multi-threaded CPUs … and where implementing the same plugins and song in a DAW with VST3 support doesn’t.

My arguments are not buried in technical speculation or being modern just for the sake of it … I have real-world situations that a lack of VST3 support in a VST-based DAW impact heavily. I love the speed and unhindered workflow of a tracker, I just want (reasonably I feel) my core tools to have the support and attention a commercial product deserves.

Exploring the vast sea of tools nowadays and the reality of what really works in your own workflow is an interesting process … I’ve certainly been through my share of tools.

By now I’ve got a pretty cut and refined set of tools, and rarely buy new ones … but all of these have VST3 now or actually need it to function. The only exception to that is NI, which I want to believe will have VST3 support at some point, hopefully soon … but I’d live without the entire NI Ultimate library in a heartbeat for a VST3 only solution.

i’ve just tried the vst3 wrapper solution. it DOES work, the bad part about it is, once you’ve removed a a .vst3 file from the folder, and put it back again … or rename the VST3 folder, the dll won’t re-recognise the files/folder again.

i haven’t found where the plugin is storing it’s vst3 folder location or saved/cached vst3 plugins, yet.

i’ve tested magicdeatheye and pulsar mu as vst2 and vst3 versions… haven’t noticed any big difference, gui wise.
resising isn’t even possible. but maybe that might be because of the wrapper. i dont know yet.

if you speak of aphrodite’s songs,
well they got mastered in a studio. so that sound got pimped and isn’t pure amiga magic

Wait, there’s Aphrodite tunes that were made with (the help of) an Amiga?!?! I have to know more, please, I beg of you, elaborate

Wait, there’s Aphrodite tunes that were made with (the help of) an Amiga?!?! I have to know more, please, I beg of you, elaborate

there you see his amiga setup. as you see, he has an akai hardware right above his amiga.


another original by him.

Ohhhhh!! Thanks for this awesome post. I had faintly heard about Urban Shakedown back then, but I never knew Aphrodite was involved with that. And I had no clue there was so much more!

Thank you, Renoise team for all your work. Renoise is the best music tool in the world.

I know this subject has been brought up before and you are working hard on it. Still, a lot of responses have been that there are not so many VST3’s and VSTs done using VST2 still work just fine. However, now that Steinberg has completely killed and buried the VST2 framework, it is very difficult for people who want to develop new plugins to do VST2. I just wanted to highlight this perspective. For what it’s worth (exactly 1 avid Renoise user’s opinion…) VST3 support is the number one feature request for me : )

Keep up the great work!
Cheers to all

So as we understanded, next update ist the prio of vst3 for renoise 3.3

If that is true that is good news. I’d keep using it either way, there is plenty of other features that keep me busy. But I’d like to be able to write a VST plugin and use it in Renoise.

This is also what I understood.

I want to use the Roland Cloud instruments.

so… any chance for a functional wrapper to use this one in renoise ? (or VST3 instr. in general that is)
https://www.thewavewarden.com/odin2

it’s the pick for this OSC round and the dev is not allowed to publish it as a vst2 instrument as steinberg prohibits that for “new” devs.

so yeah… it might meanwhile become quite handy to have VST3 support at times. i guess we’re still somewhat in a transition phase between VST2 and VST3, but EOL is closing in.

I guess VST3 support will come with the next release
Odin sounds great. Did you try the presets that where uploaded to kvr?

The dev comes from Karlsruhe (like me). That was quite a surprise

oh, the karlsruhe connection ^_- maybe u can make friends with him and obtain the VST2 version of odin?

(which exists as he mentioned @kvr, but he’s not allowed to release)
at least i found a way to use it in renoise thanks to a tip on the KVR forums: 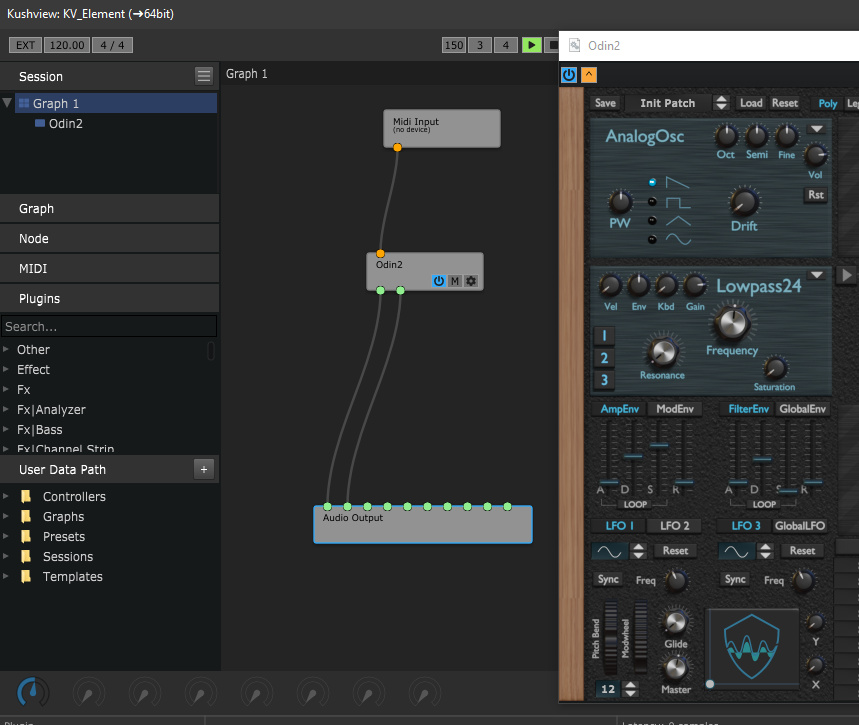 “Element”, a vst2 plugin which can be used as a vst3 wrapper.
a free version can be obtained here, if interested:

it seems to create some overhead as it seems, as a single sawtooth osc was already hovering at around 6-7% of CPU

automation only works when the desired params are midi mapped in element beforehand.
saving and remembering settings when loading the xrns also seem to work OK.

i’m also hoping for native VST3 support with the next release… this is certainly not the ideal use case, but for the moment it might just do the trick.

I’m on Linux, so that wrapper doesn’t work.

There are so many synths meanwhile for Linux it will take me years to learn them. Zebra for example is crazy. I think I have to take sone time regularly to do some sound design. I’m getting a bit bored of switching through and modifying presets.

I use Linux, (Debian Buster 10.3) and am a member of the Surge Synth Team, primarily as a tester for their Linux builds

There have been some major developments with respect to VST3 and Linux. Currently Reaper, Bitwig 3.2, Carla 2.2 and now Qtractor (still experimental) support VST3

JUCE6 has resolved the runloop issue with Linux and now it’s quite easy to build VST3 instruments using their framework. JUCE6 has yet to be released however the Surge Synth Team has built VST3 versions of the SurgeEffectsRack and the Tuning Workbench Synth for Linux using JUCE6. Surge will also be deprecating VST2 support as of the next release version 1.7

Once JUCE6 is released Waveform and Radium will add VST3 support in short notice.

Currently in Linux there are u-he synths, Auburn Sounds plugins, ryukau/VSTPlugins (at github), mda plugins and SST’s Surge Synth, SurgeEffectsRack and the Tuning Workbench that exist in VST3 format

All that to encourage Renoise to add VST3 support for all platforms, Windows, OSX and Linux

My question(s), is their a time frame to add VST3 support for Renoise? And if so when can we expect this addition?

I love surge, i saw the effects in bitwig. As far as i know where the effects build vor vcvrack but i used them in bitwig…

I think tactic has mentioned that VST3 support is being worked on. I imagine it would be the main feature of Renoise 3.3