Keeping an eye on this David Braben (of Elite fame) hardware project, http://www.raspberrypi.org/

Any chance of renoise running on a linux running on this kind of spec I wonder…that would be amazing, because I could attach it to my midi controller with a tiny SDD and 7" monitor.

I’m following this project for quite a while now (very passively). The Renoise dedicated comput0r sounds amazing. Just a small, very flat screen, tiny keyboard and the raspberry pi… Delish!

so, anyone have any idea if raspberry pi can run renoise?

Ah, can’t help you there. I’m a Linux virgin.

Renoise doesn’t have an ARM version and most likely never will.

Isuspect that with the evolution of Intel’s Atom processors and similar we’ll see an x86 alternative to Raspberry Pi one day.

Isuspect that with the evolution of Intel’s Atom processors and similar we’ll see an x86 alternative to Raspberry Pi one day.

There are loads of Atom developer boards out there!

What about the price point?

the new pi comes with 512mb… that might change something… i’m gonna be gettin a pi anyway for another project… i’m eager to try this out to see how it performs… if one used only very small samples one could still do cool stuff even with as little as 512mb ram. one could reduce all the samplerates of the samples one uses to save memoryspace…

has anybody even got it running on a pi?

has anybody even got it running on a pi?

Got what running? Renoise. I don’t think so somehow!

Renoise doesn’t have an ARM version and most likely never will.

Renoise require SSE, ARM does not have it.

Renoise require SSE, ARM does not have it.

Even worse:ARM doesn’t have the (complete) Intel instructionset (which means it lacks a lot more than just SSE).

Today by coincidence, I found MilkyTracker running on pi 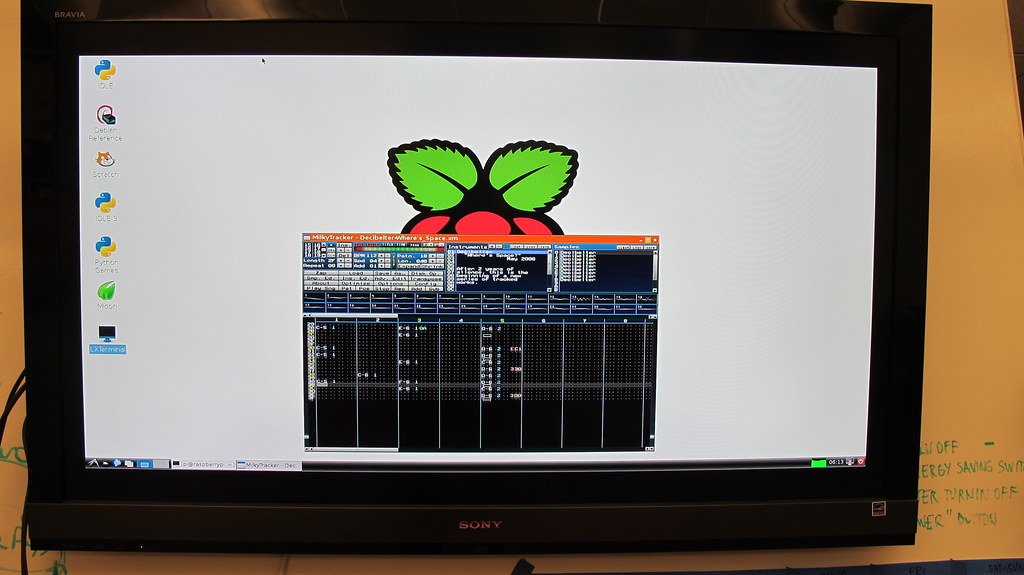 I imagine Schism Tracker will make an appearance at some point also if it hasn’t already, but as you guys say some components missing for the current Renoise.

Perhaps Renoise can be fooled with Wine here as well? But that is a really wild and low class guess.

I’ve been wanting to get one for quite awhile, to install in my car.
just haven’t seen one to buy for the actual $30 price point yet.

EDIT: looks like the price gouging is gone, and they are finally available to everyone now.

Hey people! A few years passed, the specs of the newest Pi are a little higher than in 2012. But if I’m guessing right, the other problems listed here still make it impossible to run Renoise on one of those… If so, are there any alternatives?

aren’t there other small barebone/diy boards similar to raspi with x86 atom/celeron netbook processors capable of running x86 linux? then you could run renoise on…even with vsts…heck, you probably even could run windows on these beasts and learn new complicated ways of brewing coffe to bridge the ultra long boot up times…

renoise is running on my amd c60 netbook, for tracker like sketches etc it might be ok though I haven’t used it a lot yet because of the very small screen… I guess you really have to cut down on effect plugins when using it. These small processors won’t be able to chew as much dsp as an average desktop/laptop processor. Some advanced/quality lvl vst plugins might be too much for the tiny processors altogether…

I still do not see the point of running a complete DAW on a supersmall computer. But of course you can still use milkytracker on a pi. (Tutorial linked) Justin Frankel (that guy from Winamp, Cockos, Reaper) also wrote a “somekindastable”-port of reaper for Linux and even Raspi3. https://www.reddit.com/r/raspberry_pi/comments/4h50a0/reaper_daw_coming_to_the_raspberry_pi/

Wine allows to run the Win-Version of Renoise. But I’d guess the performance will be “weird” to say the last.