In the last few years I’ve fallen into some lazy programmer habits. One of them is using Native Instruments.

I’ve been collaborating a lot with someone recently who doesn’t have access to Native Instruments, so what I usually have to do is render all of my channels separately.

Is there a way to render just a Track in the whole song to a sample? It would be really useful if there was a way to just bounce/import/assign/autoseek with one option.

I guess it would live in the “track” context menu in the pattern arranger. Maybe “Render to New Track” would be a decent name for the idea. You’d click on it, and it would render the entire track to a new sample slot, set the sample to autoseek, create a new track with a single root-note entry of the sample at the top of the song. As a bonus it could mute out the original.

This way I could still do edits and then quickly bounce my edits to a ghost track that collaborators can listen to. Even if it couldn’t be edited, it might inspire some people to chop up the renders in the sampler…

Is there a way to render just a Track in the whole song to a sample?

You can render each track to a separate .WAV file: 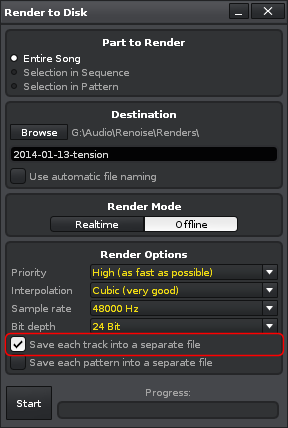 Obviously, this doesn’t do all the helpful stuff you’ve mentioned, like automatically inserting the render back into the song.

For that functionality, you could check out the Freeze Track tool:
http://renoise.com/tools/freeze-track

It should be solved via Matrix Editor where you select sequence and select something like "render selected patterns into a new sound (and also phrases but it is different thing…) IMHO.

I already knew about the Render Channels to Separate files option in the Render dialog.

There are other places in the UI where one can render a selection to a sample. I was actually kind of surprised the option didn’t exist in the Matrix Editor. The track freeze plugin looks like the best option to me. Rendering all my channels to files and only using the one I need seems kind of convoluted (as I said… I’m lazy). I guess I’ll just wait for mxb to release a 3.0 version.

Render option from the Matrix Editor would be great.

The track freeze plugin looks like the best option to me. Rendering all my channels to files and only using the one I need seems kind of convoluted (as I said… I’m lazy).

A freeze option has been requested quite a few times, but has indeed so far not been added.
I personally do see it coming one day, but i have no idea which one.