I had a bit of a brainwave and I thought I would see what you guys think. Please excuse the horrible graphics skills, I used paint… 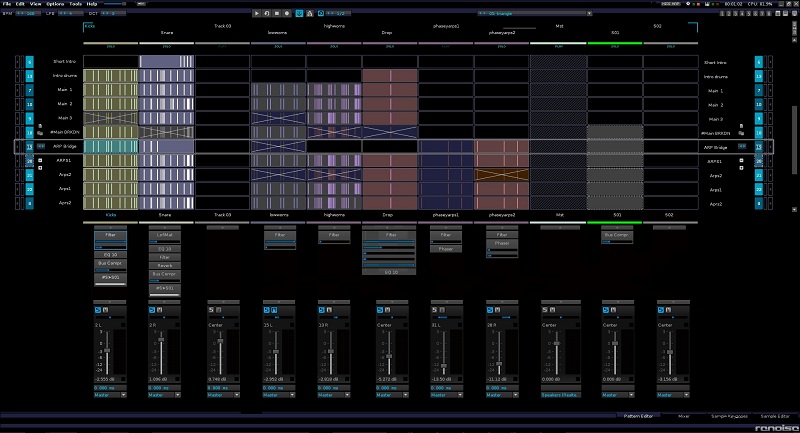 I am thinking pretty seriously about using renoise live, my set up is pretty simple, a launchpad running duplex with matrix and a nanocontrol2 for effects. With renoise 2.7 this is TOTALLY possible but I have a couple of minor issues with the high concept being: I am not really going to be using the pattern editor at all live and would like to devote screen real estate to the pattern matrix and the mixer. This is obviously possible side by side however

If you look at the central track, I expanded the effects section a bit to make it neater, this could obviously be done for the other tracks, im sure the faders could be integrated much better also. I totally appreciate this mock up has a bit of an Abletony (I haven’t actually used ableton before) feel to it but I think it has a few points worth considering

Thanks for reading and what do you guys think?

I guess we are talking clear sky visions here? The screenshot would suggest a dockable/modular-interface of some kind (and I especially like how the mixer is aligned to the matrix), but I think we can get a long way without having to wait for Renoise 2.x or 3.x

Basically, one could write an alternative frontend powered by the Renoise API, either by

Either way, you would of course loose some of the fidelity - matrix colors could be preserved, but the miniature pattern-track thumbnail would be gone.
And right now, the API does tell us the volume level of a given track, so we can’t create “VU meters” - which would obviously be very important

But the point is, it would be fully configurable, something which would be very hard for the Renoise UI, no matter how much effort was put into it.

I guess we are talking clear sky visions here?

Heh, pretty much! I guess I was looking at the idea that Renoise seems to have lots of features which seem conducive to live performance like the pattern matrix, keyjazz/midi note input/midimapping/duplex but the gui is still pretty composition focused. I managed to get a pretty large pattern matrix by removing the top and bottom screen elements (eq area and dsp area) then stretching the pattern matrix as far as I could to the right but you can’t minimize the editor.

I was actually thinking about touchosc a little. I might fiddle about with it next year if I pick up an Ipad.

but you can’t minimize the editor.

No, but you can drag out the pattern matrix borders to a certian extent. (Rightclick the zoom-button to extent sideways) No, but you can drag out the pattern matrix borders to a certian extent.

You totally can but as far as I can work out. Renoise doesn’t store pattern matrix slot size in global presets which is a bit of a pain. I actually used the dragging out option to make the mock up pattern matrix!