Request: Resample audio from within Renoise!

Probably not the first person to request this, but I’m going request it anyways.

Please add a way to route audio from Renoise to the recorder within Renoise.

This could be say from a particular Track, or even the Master.

An easy addition to the interface would be to add “Sampler Recorder” to the Mixer output drop down menus (Tracks, Master, and Sends). Then people could go to a new instrument, click on record, and bam! New instrument, new variation possibilities!

That’s the interface part of it, the under the hood stuff would be up to you.

Hopefully it’s possible. Seems like it would be a really fitting and useful addition, considering Renoise is by and large sample based.

I hope to see it added sooner rather than later!

Good idea and schould be implented in next Versions. Untill than we can only us MeldaRECORDEr like thew nice Tipp from homie @anon81231982

Yeah MRecorder, it’s free along with a whole load of other plugin. Very handy workaround https://www.meldaproduction.com/MRecorder

And this one as well

7021 joule.no0b.RenderSlotsToSample.xrnx Questionmarks below. Let me know if I should fix these: Mutes sends when rendering. Should affected sends be left unmuted? (otherwise the result will be silent when a track has a “mute source” send) Should any track OFF states be temporarily un-OFFed while rendering? PS. I just tidied up the code a little bit. No need to redownload…

Renoise already has a record function for this. Just mark the part you want to record, e.g. a part of a track/master track or even the whole pattern. All what is marked will be recorded to a new instrument. Just mark it, then right click and choose “Render To Sample”. 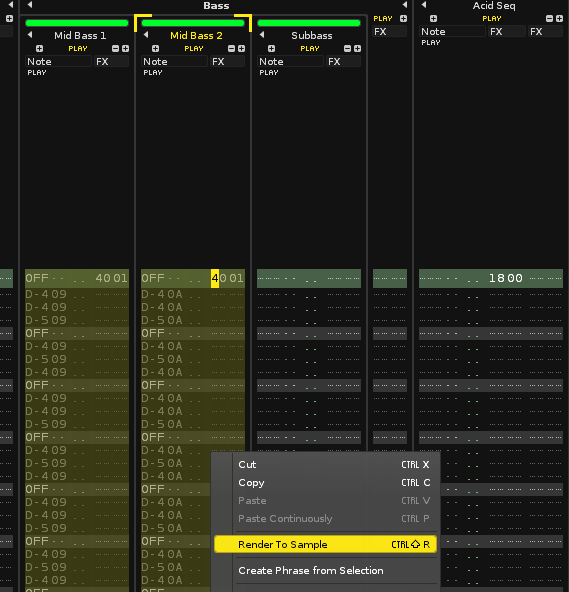 An example at 11:30 of Mr Bill using Ableton’s internal recorder to re-sample audio in real time as he manually turns dials and mashes through presets to capture glitch sounds.


While doing this he can hear exactly what he’s doing and what sounds are being created from the plugin, although he doesn’t do it in this video if he wanted to he could stop on an preset, tweak it, add more fx, tweak those, and so on, all while Ableton captures his entire jam session in real-time. This isn’t possible with Render to Sample.
2 Likes
grape_ape (grape_ape) March 8, 2020, 7:39pm #7

Having the ability to record from within Renoise the way I stated in the first post, by routing directly from a track/send/master is a lot different from rendering, and would let you treat Renoise as an instrument to sample from for quick an easy instrument creation.

There are a few scenarios where resampling can do things that rendering can’t, the main one being that it can capture what is played through a track/send/master. Good for playing additional content over an already existing pattern, or using a 3rd party sequencer to control a 3rd party vst and routing the resulting audio to the recorder.

Like I say, the ability to resample seems like it would very much fit what Renoise is already doing, and simply let you treat Renoise like an external instrument.

I also ask kindly for a live resampling option. I know there are a couple of very useful tools to render and freeze audio but, yeah the ability to record the live output would be a great addition as explain above. But I can understand when the approach is still on “programming” music rather than playing live what I also see as a reason not to do so…

Windows: voicemeeter (free)
Mac: JACK (free) - or loopback by Rogue Amoeba - costs more than Renoise but it is very useful if JACK does not work as expected
Linux: JACK (free)

Thanks for the reply. Yet, I’m aware of external solutions as well as the tools for Renoise. Would be nice to have it natively as I like to keep a system somewhat self-containing.

That said: is JACK is available for Win OS as well or? And there are other vst plugins as well:
Image-Line Edison (that’s what I use at the moment)
Voxengo Recorder

I think there are several ways you can do similar in Renoise.

You can record automations live, and then render to sample.

You can use a loopback device (software or hardware). Loopback is becoming a common feature on audio interfaces and there are also many free or paid apps to do this.
Interestingly, a classic program that did this was Cycling '74’s Soundflower. Ableton acquired Cycling '74.

Renoise is not geared towards recording audio tracks nor live jamming so I wouldn’t expect this to be some streamlined feature.

I also ask kindly for a live resampling option.

+1 A more native integrated way would be great instead of the workarounds. In the past I have used a freebie recorder vst which you can put on any track in Renoise, hit record in the vst, tweak your sounds live and when done press save to put the recorded file somewhere on your harddrive so you can import the recording back using the diskop; 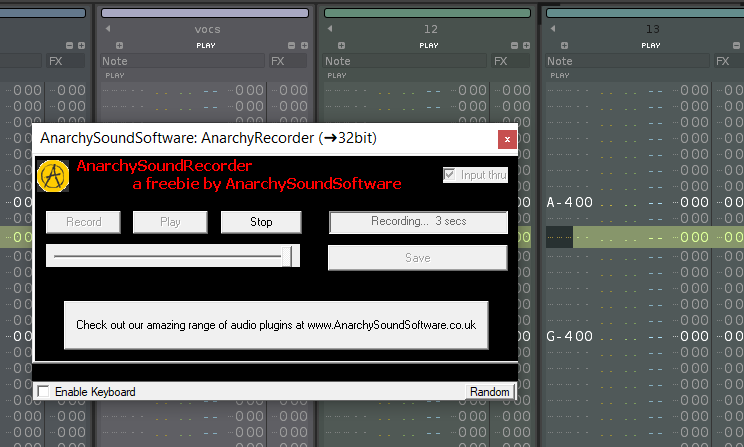 I’d love to have some kind of realtime recording and automatically consolidating the recorded sound straight back into the pattern editor, dblue ‘slice to pattern’ style (New Tool (2.7 & 2.8): Slices To Pattern). So recordings can be auto sliced as well (on set divisions / transients) and put back into the pattern as note events for moar potential glitching powers