Total newbie to sampling. I got a sample from the mic, chopped it a bit, assigned it as C400 as the first Duplex mlrx track (if it matters). Then I sample another from the mic, samples all right, but when playing it from the Renoise keyboard shown in the sample screen, it does not change pitch like the first one did, as different keys are clicked. When assigned to a MIDI keyboard, it still doe snot change pitch, like the first sample did. I looked at most of the small icons and such to see what could be wrong. What gives ? I’d expect that all samples can be played in pitch according to the keyboard. Using Renoise 3.0. - thanks !

Nope. Enabling it or not does not change anything. The first sample follows nicely the keys’ pitches, but not the second and now, the third. Moreover, I chopped up some extra dead noise at the end of the 3rd sample, and it dropped in pitch - with no way to change the pitch through the keys. I noticed that the horizontal scale of the 3rd sampling goes up to 16 whereas the first one goes up to 9 (end of 8). I can change the scale using the slider, but that does nothing for the pitch and the keys. It seems that it’s not possible to have the exact same workflow and behaviour as the first sampel was created with subsequent samples - there must be something wrong.

I saved the samples, and restarted Renoise. This time I did not load Duplex mlrx (again, if it matters). With a new project, loaded the saved samples, and now they are following the keys. Hmmmm…

Can you upload it? I’m having a hard time following what you’re saying.

I haven’t tried mlrx myself, but it sounds like the tool might be fiddling with the sample’s beatsync property, in order to sync any loops to the song tempo.

When beatsync is enabled, the sample will always be pitched to fit the duration (in pattern lines) that it’s been set to. No matter which note you press, it will always play at the same pitch.

Check if this guy is enabled: 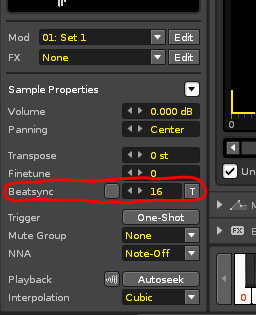 Also if you have phrases on that is not set to transpose, it won’t transpose according to the keyboard.

I haven’t tried mlrx myself, but it sounds like the tool might be fiddling with the sample’s beatsync property, in order to sync any loops to the song tempo

Indeed - when you load samples, and beat-sync is enabled in mlrx it will match the beat with the project tempo.

Luckily, the beat-sync button is pretty prominent in the mlrx UI (even if a bit hidden in Renoise).