I’m especially interested in any ideas on making good metal guitar chains. The one I included is ok but I still think palm mutes sound too muddy.

Ok a few things: first, I think this idea:

Hello, Would it be possible to change the Cabinet Simulator DSP so you can switch off different components like the Cabinet or the EQ, so I can choose my own Impulse Responses and only use the Preamp/EQ? I’d really like to see it becoming a simple Amp Simulator in the long run, where you can choose different kinds of preamp-tubes, maybe tone stacks and after all your own custom Impulse Responses as cabinets. The convolver is already there, so for a start it would be really handy to be able to …

would be absolutely amazing. I have some impulse responses that are really good, they’re like magical bullshit for making good guitar tones. I don’t know the origins of these IR’s, just that I got them from a youtube video: http://youtu.be/cBjpXPaLIh0

Now you can use Renoise’s distortion no problem, and Renoise 3 has the convolver, so all you really need is a good amp sim that lets you disable the cab. If you download Free Amp from the youtube link, or here: 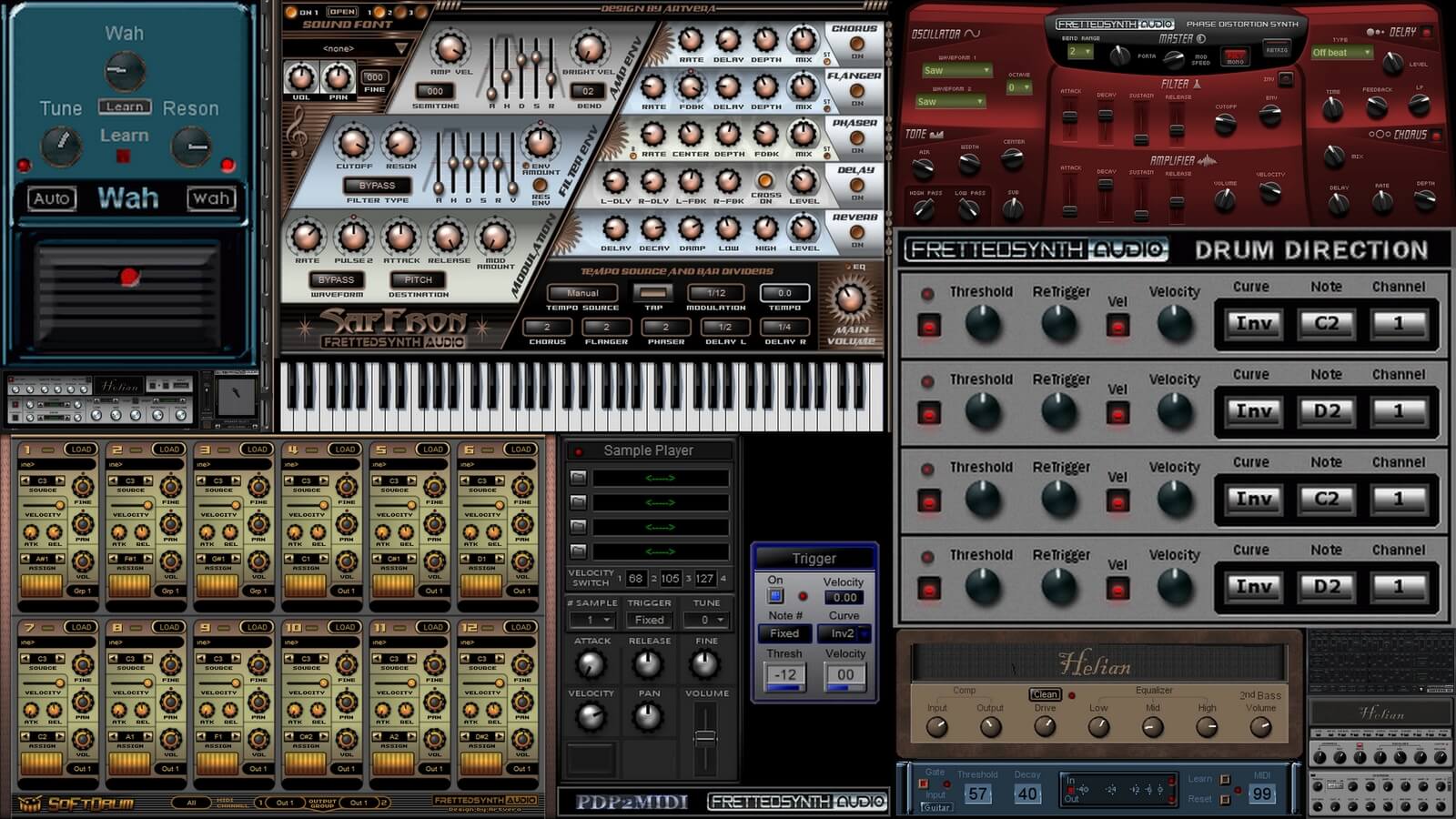 The plug-ins on this page are created by Joseph DeHelian of Fretted Synth Audio. Since the Fretted Synth website is currently not available you can download the plug-ins from rekkerd.org, including the FreeAmp series of multi guitar amp effects,...

Then you can use this chain:

Bit Arts’s “little rocker” chain makes a pretty good guitar chain too, so check that out if you haven’t and you need a good guitar chain. However it’s not the thick clean heavy metal guitar tone I’ve been trying to get. I’ve tried every single cab and actually none of them quite get me what I’m after, (not a criticism at all, I think the cab sim is great) so I think for now I’m going to be using VST’s at least for my heavy tone. If you’re just strumming power chords or noodling a lead you can get some sufficiently heaviness out of the cab sim but it just turns to mud when I palm mute. It sounded so bad I actually thought I had just forgotten how to play guitar properly (it’s been a while since I played on any regular basis). Anyways, here is a quick little riff demo of the above chain:

To get a more heavy sound from the tiny rocker-chain, just add a Scream Filter right before or behind the flanger (matter of taste) and adjust it to your needs. The rest is EQing only. It’s actually possible to get some quite heavy sound out of native Renoise.

Just tried that, it does get me a lot closer to my target sound. But it still just sounds muddy too me, especially for palm mutes. And while I might be able to clean it up some with EQ I still feel like it’s still not quite going to be what I’m looking for. It’s hard to describe but it sounds too distorted, which is a weird thing to say, but I feel like it’s just stacking distortion on distortion instead of being a good solid starting point tone. And maybe it just comes down to taste and what I’m used to hearing.

Comparisons with no EQ:

And really I am not very good with EQ at all so this also just be my problem in terms of mixing skill. To me the first one sounds muddy and rumbly. The second one sounds cleaner and smoother to me. And there’s almost no distortion pre amp. It’s the kind of tone I associate with thrash metal.

Edit: I feel like this riff is a better demo:

How about some references of what you’re trying to sound like? That’d make things way easier.

For the last example you posted try adding an EQ behind the distortion and reduce 3 to 6db @ 300Hz with a bell EQ and 0.66-1.33 octaves bandwidth.

Another thing you can try is a lowshelf EQ @ 200Hz, lowering everything below for ~3db at the end of the chain or in the cabinet EQ.

Hmmm ok. I’ve always really liked this band’s tone, it’s pretty much what I idealize when it comes to metal guitar tone.

Hmmm ok. I’ve always really liked this band’s tone, it’s pretty much what I idealize when it comes to metal guitar tone.

This doesn’t sound like a single Cabinet to me. There’s something layered. But I’m not a guitar player at all and actually have no clue, how metal is actually mixed. So it’s hard for me to guess, what it is. Anyway, here’s another go:

It quite possibly is layered. It in the very least is 2 performances of the same parts panned away from each other, which is very common. Can definitely hear slight variations in the palm muted section in left and right.

I want to thank you for trying this, it’s awesome! My honest opinion however, (and I don’t know if you actually have DI guitar samples to mold around and I’d imagine it’d be damn near impossible to do without), is that it sounds really thin and the original tiny rocker is quite a bit better. Actually I still think the tiny rocker tone is a completely legit good guitar tone, just not for certain kinds of metal.

If you use long cables or if your pickups are a bit weak it can be hard to get the “punch” you want from your guitar. Fixing this loss of signal will improve the sound quite a lot and this little circuit does the job surprisingly well: http://www.till.com/articles/GuitarPreamp/

runs circles around renoise cab.simulator.
And yes ,you can load your own impulses .
And it’s free
http://www.voxengo.com/product/boogex/

If you use long cables or if your pickups are a bit weak it can be hard to get the “punch” you want from your guitar. Fixing this loss of signal will improve the sound quite a lot and this little circuit does the job surprisingly well: http://www.till.com/articles/GuitarPreamp/

I don’t think my cables are long enough for their to be any significant signal loss, and the signal is actually really hot and I have to turn the gain down on my interface considerably to avoid clipping. That’s with my backup interface I’m using right now. With my scarlett 2i2 (which is being repaired, it died on me) the gain won’t go low enough and I actually have to turn it down on my guitar to avoid clipping. Well, with my main guitar at least. Anywho I can get the tone I’m looking for out of VST’s, was just curious how close I could get with the Cab Sim. This isn’t to say I wouldn’t benefit from a preamp, just that it’s not necessarily my “problem.”

@Gentleclock
I’ve been trying a lot of amp sim plugins with good results, I may as well try that one too.

If you think you could benefit from a preamp, then how could it not be part of the problem? You can melt gold into jewelry, but you can’t turn rocks into gold.
Not trying to say that this is the only problem though, but the better signal you have as a starting point, the easier it is to get a nice sound later in the chain.

If this small preamp circuit will be the best solution in the world is probably not the case though, but whenever i have used it it has improved the overall sound on my guitar. It might be just because the circuit colors the signal a bit, i don’t know, but it’s supposedly sounding a bit like a Fender tube preamp.

I also have to turn down the knob at the input with or without the preamp, but it still makes quite a big difference.
I really doubt the input of the Soundcard is optimized for guitars.

Well what I meant was, I might benefit from the coloring, but there are other ways to color your sound too, there are preamp plugins, and there are amp plugins with preamp modules that plenty of people use to great effect without a physical preamp.

I don’t know whether or not my interface is optimized for guitar, but it was definitely intended for guitar as there is literally a guitar symbol on it.

It’s true you can’t polish a turd, but I guess I disagree that that’s happening. If the raw signal is bad, then it’s bad going into the preamp too. What can a physical preamp do that you can’t do with software?

This is the standalone preamp plugin I’ve been playing with last couple weeks. Just the clean signal out of it without any additional amping sounds really good imo.

The following work is the result of my bachelor thesis, titeled “Real-time implementation of a tube preamplifier in order to distort discrete audio signals” (original title in German: &…

I didn’t mean to insult your way of mixing a guitar, it’s probably better than what i can come up with, it was simply just an advice to how you can improve it even further.
I don’t know that much about the subject, i have just been adviced from some people with better knowledge than myself about this. Maybe your sollution with a plugin is just as good, i haven’t tried it and compared, but i still think that my guitar sounds better with this circuit than without it no matter what i’ve done to the signal later in the chain. So it’s just a suggestion, if you have the tools to make it, it shouldn’t take many minutes to build this thing.

If you don’t want to try it it’s probably not the end of the world.

No worries I wasn’t insulted, it’s actually a good suggestion. I only meant to express that I don’t think it’s the missing link in getting a rich heavy metal tone out of the cab sim, I just think the Renoise cab sim (while great, I use it for clean tones a ton) just doesn’t quite cut it (compared to VST alternatives).

I haven’t directly compared preamp plugins to physical preamps either, so I don’t really know if one is better or just as good as the other. My sneaking suspicion though, is that neither is better than the other, that they are simply different.

Somewhere in my house, I have a soldering iron, so I might go for it one day, though I’m not sure I have the skills to do this without screwing it up.

But the difference with a plugin and a physical one is that the physical one is put in the chain before the loss in signal has happened, while the software will just emulate and compensate for the lost signal. Using both is probably the best.

The circuit is very easy to do on a strip board, can’t do much wrong other than mixing up the three pins of the transistor, so you should check that before you solder as the pinouts vary. I use a 2SK117 and it works very good.