I do miss one thing from the good ol’ IT / FT days - there was an easy access to a view that shows the pattern, but only its notes, so you could see the entire song even in songs that use many tracks.

Is there such a thing in Renoise? If not, I think it will be a very nice feature to have, and should be fairly easy to implement - one shortcut that hides everything but the notes in ALL tracks, and same shortcut restores these columns again (toggle).

If I am not mistaken, there was also a led view in IT, that used to even hide the notes themselves, and only show a blip dot when this track was playing, so you could instantly identify which track is playing the drums part, and which tracks are doing something else.

BUT - I feel that asking for anything in this beauty is rude, since it is so unbelievably excellent.

Wait a minute… found it:
Screenshot of the screen I was talking about. 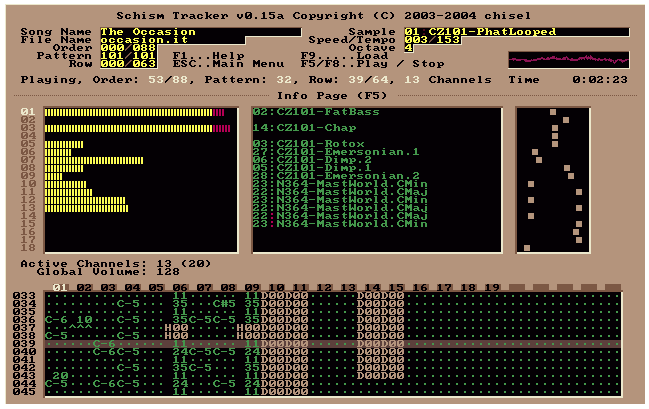 This screen had another added value - you could instantly see any panning problems, since all pan indicators were one on top of the other - was nice to have for the final mastering.

The closest thing you can get is to remove all panning and volume and effect columns.
The pan/vol columns can be done by shortcut keys or clicking the buttons, the effect column can be hidden by clicking the left arrow above the column.
Even if you could achieve the same in Renoise as you could in IT/Schism, IT/Schism had a limit of 48 channels that you could see at max. In Renoise this is easily reachable as well if you count in the subtracks as well.