You Must Enter A Topic Title Longer Than 2 Characters

I moved apartments. In the process I put a bunch of old CD-ROMs in the garbage. Before I did, I looked at them.

Please enjoy 6 noise tracks made in while studying for a BFA in Electroacoustics circa 1998, complete with 1998 sub-standard MP3 encoding, 404 not found ID3 tags, and the rantings of a lunatic in his early 20s.

Ironic parallels of harsh proportions between anarchism and corporate
economic models ; trickle down economics states that governments should
keep regulations out of capitalism. “Government controls are not like a
suit of clothes that can be put on or taken off at will.” Is this a
leftist argument or a right wing agenda?

Should have, but wasn’t played during MEDUSA series of that year. A collage
of rhythmic elements and sounds, be it present or historic, associated with
the popular dance music of a specific time. Tribal hedonistic mayhem meant
to be enjoyed critically through the boring act of sitting on your ass. This
one tries to rip you out of your seat.

Primordium assignment. Where the primordium is the one and only sound source.
The complex results of a controlled class assignment; a simple ride through
the dynamic range of the modern primitive preformance instrument in question.

Let the experience take you where every excusable audiophile hiss becomes
an unexcusable focus of pain; more primordium; more modification of source.

To the point in life where what you did is better than what you are
doing. Return to the fundamentals. Go back to sleep.

Using a speech emulation program, my computer reads personal e-mail. All
other sound sources are either internal to the computer (such as virtual
synth, speech, etc.) or samples of jungle and techno I was doing prior to
the formation of PFD in 1996. Bringing necessary closure, mixed with
shameless narcissism. How ridiculous is the notion of computer technology
as human experience? Ridiculous enough to be the dismal and present state
of now.

My compliant and generally uninterested apathy towards present war
situations in Serbia vs. my roommate’s violent and personal aggression towards
the entire planet. The end of the world is near and I continue to ignore.
A study of granular synthesis as a violent catalyst to provoke my own interest
in what I have been successfully programmed to pass off as just another news
story.

Well I kept thinking about these. So I’ve downloaded them. Give me a bit to digest them.

Well I kept thinking about these. So I’ve downloaded them. Give me a bit to digest them. 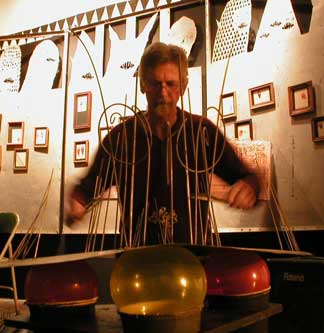