A few feature suggestions (let me know if they already exist)

These are some ideas in no particular order:

A bit more functionality in “Y” effect: this is a secret gem for creating interesting, generative music. I’d like to see it become a bit more flexible, or perhaps introduce other probability effects if “Y” cannot be further modified.

This gives some more control over when notes appear so that they don’t jumble up on each other. There are other ways to expand the probability aspects of Renoise for the better.

Some sort of “seed” or note map for when you have probability (“Y”) in your songs, which is generated each time the song is played or rendered. This ensures that if you render the song twice, it will sound exactly the same despite the probability events as long as the seed or map file of the first render is fed into the settings of the second.

This matters because often times generative music will be rendered and upon playback, especially over repeated listening, it gets a certain character that would be lost if the song is re-rendered with notes falling in a different pattern due to “Y” effects. But what if you like the song you have rendered but need to go back in and change a few things? You’d have to re-render and then lose the character of that initial render. There should be a way to edit the song further and then re-render it but with all the previous “Y” events occurring in their initial way.

An ideas or scratchpad section so that you can create either an individual track in a pattern or entire patterns and not have to place them anywhere in the pattern matrix until you want to. Someone once said that phrases accomplish the same thing but in my experience that doesn’t work well.

The Game Boy tracker LSDJ does this very well. You can create little patterns and they each get assigned a number, but you are not obligated to place that pattern anywhere in the song unless you want to. Then, in the pattern matrix you assign pattern numbers at each position to create the song.

This lets you jot ideas as individual parts and then figure out later how to put them into the song. I don’t think Renoise has a good way of doing this yet. Sure, you can just tack on extra “idea” patterns to the end of your song and then mute them or delete them later but it is not a great solution. LSDJ implements it perfectly IMO.

As I get more experience with Renoise I feel better about making music inside of it, but often times looking at the patterns while playing a song feels like being in the Matrix. It’s not THAT intuitive, though it can work of course. Instead of reading pitch data as it flies by, how about a visual way of seeing what each track is doing? To help you better analyze your own songs and those of others.

One idea is to have a widget or screen section that displays a tiny row of boxes (sort of like drum pads on a Midi controller but only occupying one row), with one box for each track. As the song plays, each box can change color to signify the pitch, for example if C1 was blue, C4 was green, C8 was red (a rainbow spectrum), each box would change rapidly in color as the notes of each track play. This would give a good visual reference for what each track is doing and help understand pitch and note data a lot faster. There’s many other ways of doing this, too. Whatever would work best from a developer standpoint is fine with me.

Perhaps this helps with 3.3 development. Anyway, Renoise is an amazing piece of software and I’m happy to be using it more. Like many of you, current global events have given me more time to enjoy making tracker music.

You’ll get additional structural editing this way. Every time you put in the phrase trigger, it will not only trigger the phrase and it’s 0YXX commands, but you can also make the main sequencer more deterministic with its own set of 0YXX commands.

Maybe you already know this, or maybe it’s not enough. What’s neat is when you begin adding in some of the extra FX commands into the sequencer(s), and then putting 0YXX commands on them. They can appear after the played note and do all sorts of glitchy/random/deterministic stuff.

Your second idea of the ‘seed’ would be nice, and there have been times that I wished that I could get things sounding exactly the same. You could just program those parts to be the same every time

I don’t know about color options on your third idea, but Renoise does do individual track visualization: go to the menu, go to “View”, select “Show Upper Frame”. You can view individual channel scopes or an overall track frequeny EQ.

Thanks Neuro… No, I hadn’t considered that at all with the phrases but it makes sense. It’s a pretty interesting technique. I’ll try it out soon.

Another example of more functionality (as far as I know this cannot be done) is to put global tempo changes in a looping pattern at various points and then have them trigger with probability y. But there is no way to do global effect commands with a probability or create probabilities of parameters changing (example: play this note always but 40% chance it pans to the far right).

Just some ideas there.

The track scopes aren’t that intuitive for me to get an overall feel for the pitches of all the tracks the way you could by viewing sheet music. They help with other issues though and mixing.

stoiximan: I hope they really implement that. lol.

Global tempo change is there, unfortunately not via percentage, but you can do that in the global ZXXX menu. That’s some pretty fancy stuff

It might be possible that you can use the phrases method to change the panning on a percentage level OR do that in the main sequencer. Not sure, though, it might interfere with another operation you’re trying to do.

Renoise really isn’t a classically-trained composer’s dream, especially if you’re a sheet music kinda person. Sheet music and I never got along, always had trouble deciphering it (my brain just gets scrambled looking at it, and it’s been like that for 31 years). What it is great at doing is making varying sorts of electronic music, from “boom-boom” to experimental. Some folks here can make actual classical and other forms of acoustic/natural/pop with it, easy to find via search, but Renoise is really more of a bridge between standard DAW and stuff like Max/MSP.

There’s another MIDI software for composers, but the name escapes me. It’s VERY deep, mostly people using it are creating classical styles of music with it, but on an extreme level. I’m talking college professors with doctorates, using it to maintain their tenure. Not normal music software.

Track scopes are as good as it gets in Renoise - it’s for level detection, mainly. What you’re asking for (pitch detection/feel) is interesting, and very advanced. 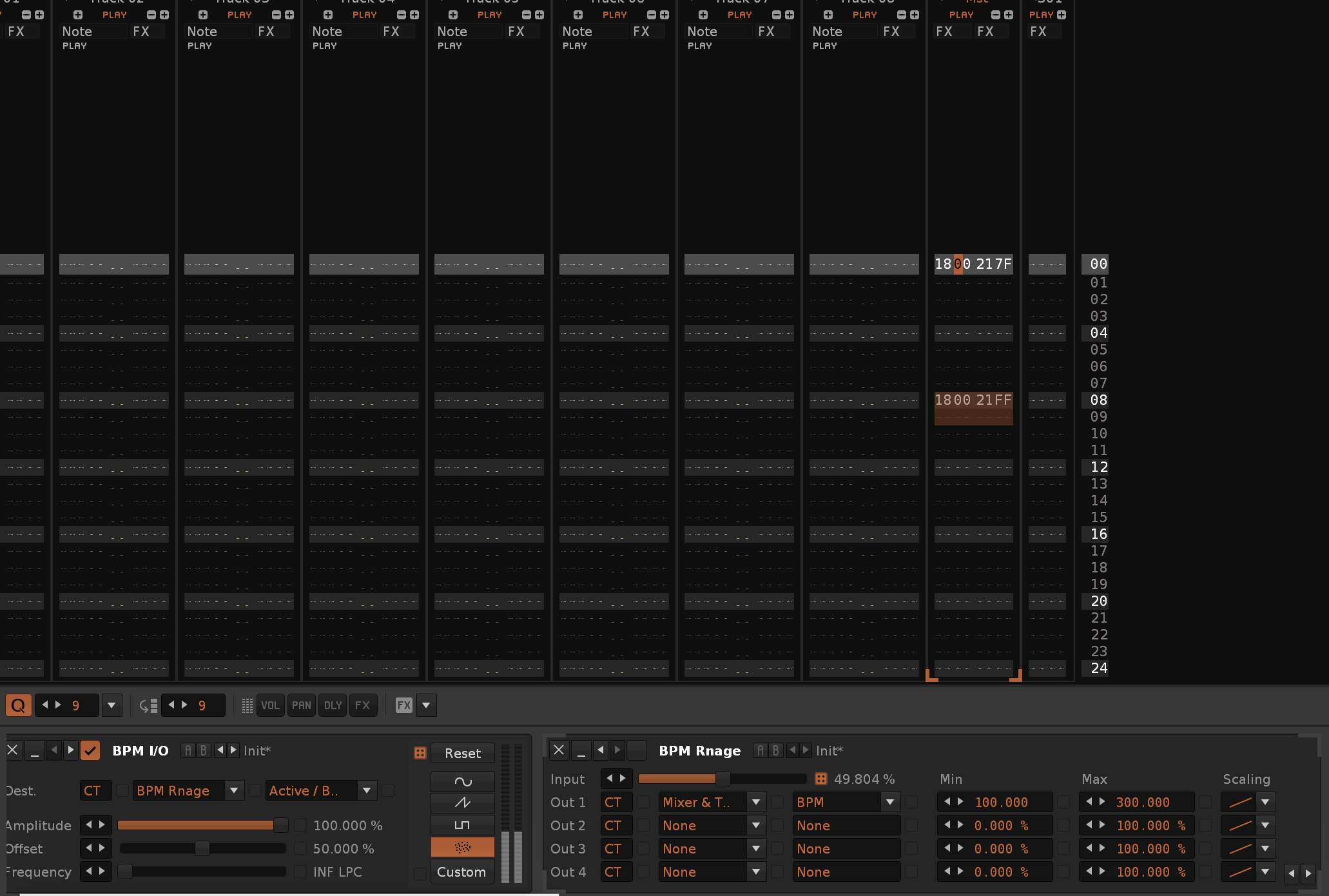 Probability of the hydra begin turned on or off can be increased or decreased using the LFO’s offset. Lower offset results in the hydra being activated less, higher offset means it will be activated more.

There’s another MIDI software for composers, but the name escapes me. It’s VERY deep, mostly people using it are creating classical styles of music with it, but on an extreme level. I’m talking college professors with doctorates, using it to maintain their tenure. Not normal music software.

Only ones I’ve heard of are Pure Data and the ChucK audio programming language. Both are beyond my current capabilities at the time, but possibly one day. I like generative but I also need to be able to add my own layer of changes on top of that, and Renoise seems better suited toward that than a full-blown programming language.

Nope, haven’t seen it. Back in the late 1990s there was a cool freeware program I used to like using, which made MIDI generative music based on fractals, and had a bunch of random parameters (didn’t understand any of them), but it always ended up creating something interesting no matter what I did. That would be fun to try again but I have no idea what it was called.

And yeah, the sheet music isn’t my optimal way of understanding music but it does at least give you pitch info in a fairly straightforward way (if you see a bunch of notes in a row all rising, then the melody is rising…) and I can get some useful information about the rhythm and such. Can’t really “play it in my head” like some can, though.

I’ll have to think about that for a day, but it’s impressive. Thanks.

I found the fractal generative music freeware program I was discussing in the last post… maybe Wine can emulate it. 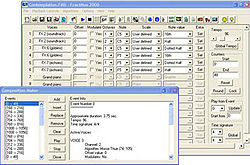