I was thinking of purchasing an external effects unit to process my synths, since my audio interface (Steinberg UR-44) has 4 line-outs in addition to the headphone/speaker line-outs.

I was looking to keep the synth plugged into the line-in and route the signal to one of the line-out busses and then to the effects unit using a send device, since I might want to also keep the full dry signal for other uses, although I do understand I could also directly patch the synth’s output to the effects unit.

What my question is is how would I access those line-outs on renoise? I don’t have an effects unit right now to test, so I wanted to ask. I see that under the drop-down menu on each track there are a couple options for routing. 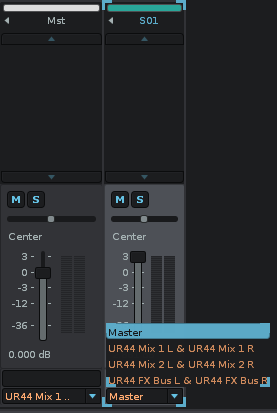 Are these routing options for the speakers/headphone mixes only or do they also correspond with the line-outs on my audio interface? One buss is the built-in effects bus for the reverb and compressor, which I’m not too worried about, but the mix 1 routing option is usually what my master track is routed to. The second one seems to correspond to the mix 2.

The block diagram in the manual seems to tell me that Mix 1 addresses the first two line-outs and Mix 2 does the second two. Mix 1 seems to be grouped with the main/phone output.

It’s possible to use External FX hardware with Renoise, but I won’t pretend that it’s easy. It requires some weird processing, which I’ll try to cover below. Whether this will work for you or not is, well, up to you and your needs…personally, I use an Alesis Quadraverb externally from time to time. I don’t mind the weird workflow with Renoise, but I could understand if others aren’t willing to put up with it.

make sense? In my setup, I have these named “To Quadraverb” and “From Quadraverb” to keep things clear, so that when I put the Send device on various tracks, I always want to select " To Quadraverb". You’ll never need to Send to the “From…” track, it exists purely as routing to grab the output of the FX (via the Line Input device, as described above) and pass it on to the master.

PART TWO: WHEN IT COMES TIME TO RENDER…YOU HAVE TO RECORD THE FX OUTPUT MANUALLY

Here’s the big problem with Renoise and external FX (yes, bigger than the routing headache above): when it comes time to mixdown, you have to manually render (e.g. record in real time) the output of the FX unit.

Renoise, in its current form, will not render any external devices when you tell it to render a full mix, or (sadly) even with the “Render to Sample” command.

This means that for the purposes of just working on your track, you can Send as much track content to that External FX send as you want, and you’ll always hear the External FX just fine, BUT when you render your track, the FX will not be printed!

So what to do? You have to “print” the external FX output yourself (see below) and then once that done, trigger that recorded content, and then render your whole song.

(because you want to record exclusively the ‘wet’ processed signal from the external hardware).

What you’ll then have is new “instruments” (since any recorded sample in Renoise is an ‘instrument’) that is really just the raw waveform of your wet-signal Return FX, which means…

You need to input a note in the sequencer trigger that audio. In effect, you’re just playing back a recording of the FX instead of the realtime FX output of the hardware. At this point you can turn off the FX sends that were sending (so you don’t hear doubled-up FX).

the newly recorded signal does not contain any dry signal; it simply represents the Wet, Send FX content. In other words, it’s a recording of the FX only, so it has to be played back alongside the dry signal. Basically you’re replacing the Send FX with a new channel that plays back a recording of those send FX (why? again, because Renoise won’t render that content by itself; you’re doing it manually so that it shows up in your final render).

So, that’s the process. If you’re competent / experienced with audio routing and keeping it all straight in your head, this is actually not difficult, I swear! It’s just a matter of managing the difference between “realtime FX output” and “rendered FX output” (the latter being done via the recorded samples of that output).

People’s mileage will vary, of course. It all follows a certain logic, but certainly Renoise could have improvements down the line that would vastly simplify this process.

Meanwhile, this is how you do it… give it a shot and see if it can work for you.

After the thorough post above about the renoise routing logics above, I just want to add that for your sound card there is a mixer application available, you should download the latest version from steinberg if you don’t have it installed already. Yes, the box has extensive internal routing options, and you will need to rtfm (read the manual…boring shit, I know) and play around a lot to learn how to use all this. We cannot really wipe your ass on this, but maybe someone has the same box and some direct experience with its routing & is able to chime in with some tips.

It seems to have 2(!) individual digital mixers inside, and even digital FX units and a dedicated yamaha digital reverb unit that should also be very interesting to explore. The inputs/outputs you see in renoise are nothing else than virtual pipes to/from the audio interface, how those correlate to the physical inputs/outputs is up to how you configure the mixers with the control application.

Just a tip: you can actually record the whole lot in realtime with external fx processing if you pop something like this at the end of the master bushttp://www.voxengo.com/product/recorder/ (this is Windows only I believe, but there are others, I use something I made in Bidule, but essentially it’s the same).

It’s sometimes incredibly useful to be able to record like this, not only for the above scenario, but it you are live tweaking stuff.

Or Melda MRecorder (macOS / Windows, even better than Voxengo). BTW. just curious, last time I used external synths, I could render in realtime (not offline though), and the external stuff still was audible… So what is different in my scenario? Because I did not send out audio, only receiving?

I agree that Renoise is lacking of an “external fx” device.

BTW. just curious, last time I used external synths, I could render in realtime (not offline though), and the external stuff still was audible… So what is different in my scenario? Because I did not send out audio, only receiving?

I believe that’s exactly the difference, yes, though I agree it seems like if it can do one it should be able to do the other. I unfortunately don’t know the technical explanation for why it can’ do it. Hopefully it’s something that will get addressed in future updates.

Isn’t it like…if you send/receive audio to/from outside, you would need to compensate latency to make sure the timing is right? Normally one would need to make a feedback connection and measure the roundtrip with a test signal/software?