I made this thread because i recently started working on a DIY project that i thought i should share with you. The goal is to make a useful sampler sequencer using easy methods and cheap parts.

Here is the basic idea for the main unit: 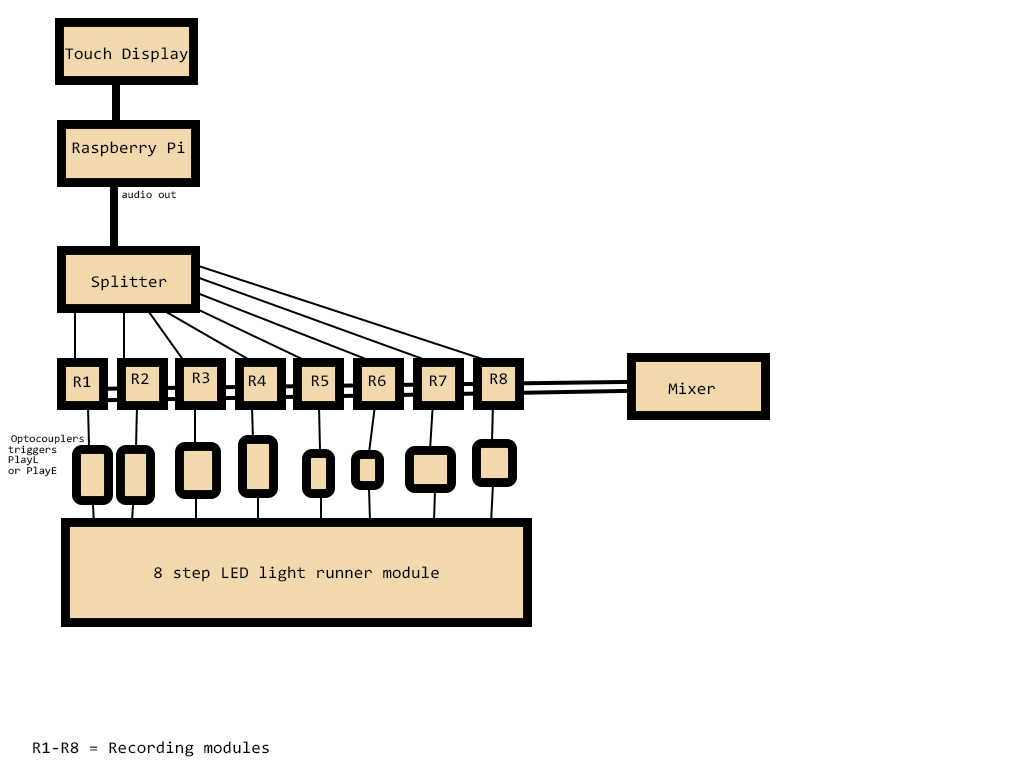 This is just the core idea so far. The final unit should have several preamplification stages with tone controls, possibly a tube preamp for the final stage, reverb/echo/delay in some form, ring modulator and a robot/pitch/vibrato voice modulator.

It should have the possibility to record from the arduino, through a microphone and a line in jack. Maybe i’ll add a theremin if i can make it work or gets room for it in my box.

Not yet decided on the casing, but i have a wooden box from IKEA that might do the job.

I’ll keep you updated on the project when i have something interesting.

Let’s start off with a modification of the ISD1820 module: 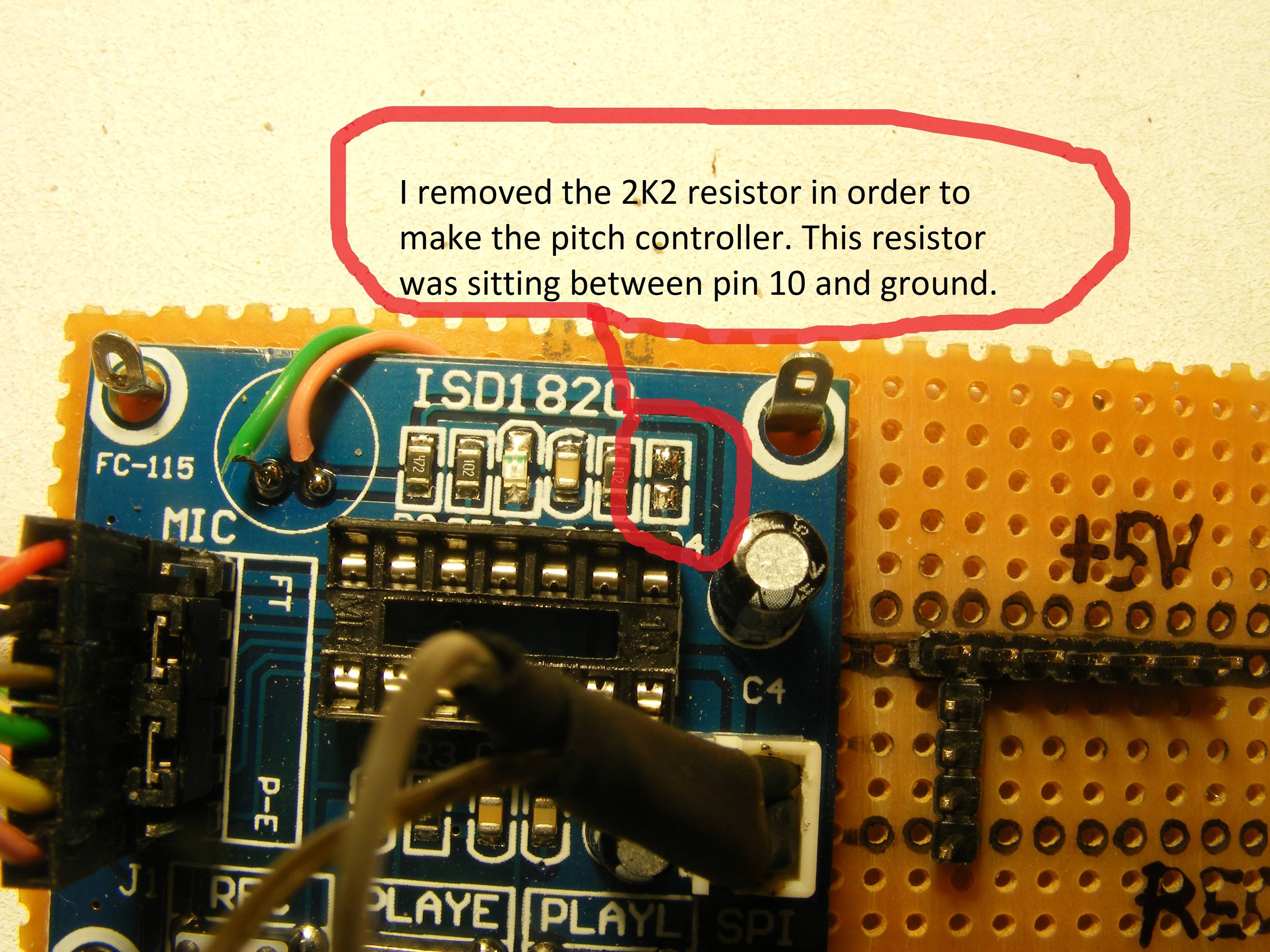 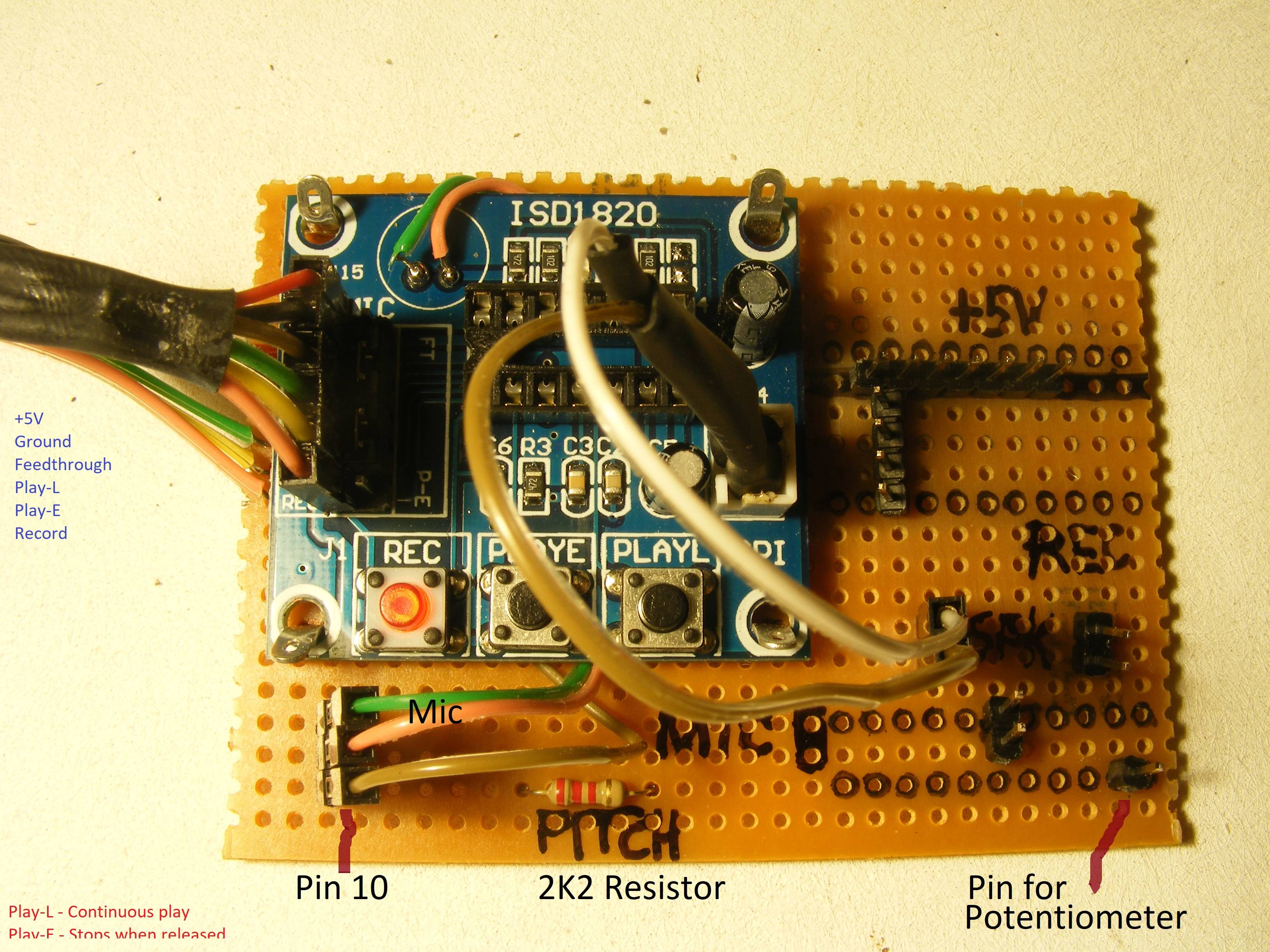 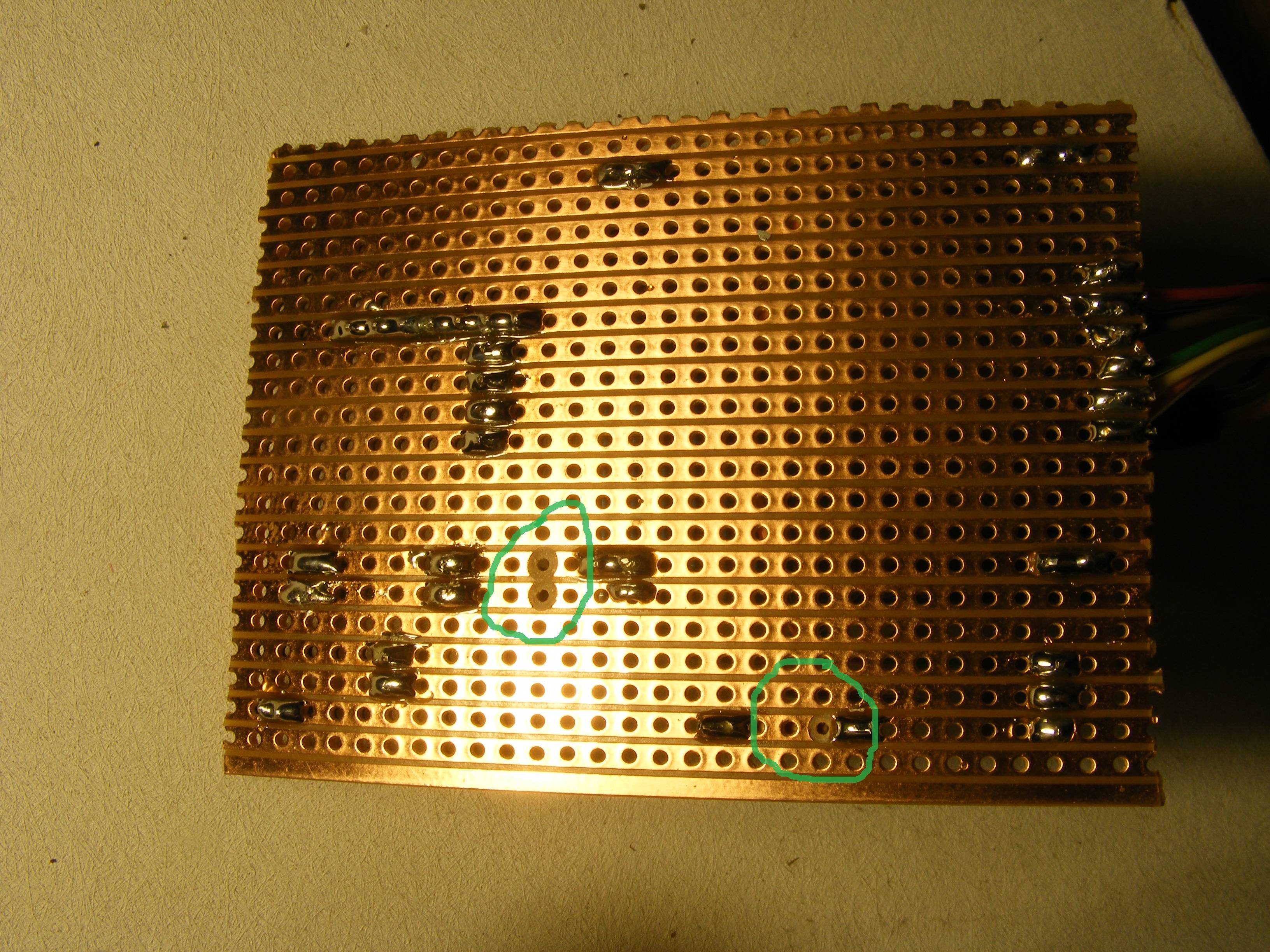 EDIT: I just noticed it was not a 2K2, but a 100K resistor and that’s quite a difference. 2K2 is too low and will result in awful quality recordings.

I got my Rpi some days ago and i have done a little bit of research and checked out what’s possible, but screen resolution is low, so it’s a bit limited for games and such. Raspbian worked well after fixing the screen res, which is a bit odd 800x480. Windows 10 for Rpi is basically just an empty shell, so will only be useful for developers.

I read about a way to use the rpi pwm output and use that as a control voltage. The signal is not good for other uses as it’s duty cycles aren’t consistent, but i think it can work as a on off clock signal for syncing the sequencer.

I have ran out of terminal connector cables, so i’m waiting for refreshments and can’t really do much without those. So far i have mounted another module on the back of the above module, so that i got two in one. I also found a temporary box for this module and also added a voltage regulator module so it’s pretty much self contained. I have the pots and switches i need, but i need the cables and also some suitable drill bits for the mounting.

I basically need to make 4 of these boxes and one for the sequencer. I’m considering to drop the Rpi and make it use other analogue sources and microphone or whatever. I hope i get the AM radio kits soon, then i’ll be able to see if this ‘3 AM Radio Theremin’ thingy works. Also i hope to get room for the synth chips i ordered a short while ago. It has noise and sine output, so it should work well for some percussive sounds, though it doesn’t appear to have a built in filter.

When i come to think of it i rather want my pi as a standalone unit with possibilities to add functions as i’m learning. Maybe i can turn it into its very own audio mixer, fx box, oscilloscope

I imagine latency would suck pretty bad though, but the pwm can be controlled in realtime so i can probably still use it for syncing different future projects.

The Rpi can be used for a lot more though, i can run apps on it and program directly on the device. It should be possible to install dosbox on it too, so i’m hoping i can run some old trackers on it.

I can also hook it up with an arduino later and program the arduino from the Rpi.

Sorry for the late updates, i’ve been waiting for some parts and most has arrived now, though i see i need more cables, switches and pot meters. Ah, i have gotten so many small packages of stuff and completely lost count and now my soldering iron needs a new tip. Finally today my 3 radios came in my hands after post office had lost the package for a while.

So now i’m off turning them into a theremin.

I have also thought about adding some acoustic elements. Piezo elements are nice for that, as they only pick up the vibrations and not the surrounding sound like a microphone. You could also turn it into a switch to turn on a sample from the recording modules or whatever.

The radios are just as good as what one could expect for $2.7 per piece. When i opened the battery cover of one, it just broke in two from barely touching it. They are completely uncalibrated, volume sliders have different volumes on all 3, one is louder on the mid setting than turned all the way up and they’re all crackly and unstable. So are the variable capacitors, they’re impossible to fine tune and one does only crackle like crazy half of the AM range. I can’t get them to silence each other out in AM mode, though i can do it in FM mode, but that doesn’t help me as this is only supposed to work with AM. Not shure if i can fix them, but i have some new vari caps and pots i can replace with.

I guess i’ll have to make it work some day, in the meantime if you’re interested, here is my last ‘theremin’ project that works with IR instead of induction:

It’s actually pretty easy to build, i made mine with a function generator IC. All you need to do really is to create a function generator circuit, then instead of using a potentiometer you instead use a IR Phototransistor. This phototransistor has a filter so it basically just picks up IR light. Now you only need an IR LED to emit light that your hand can reflect it and send it to the IR phototransistor which then changes the resistency just like if you turned a potentiometer.

It also contains an echo/delay circuit made from the PT2399 chip.

It’s true that there’s a lot of crap being made in China, but they make just about everything, so what can we expect when they sell radios for 2 dollars included shipping and are still able to make money out of it?

I’ve have quite often been surprised the other way around actually, that i got something better than i expected. Those 2 dollar radios didn’t impress me much though, but i still have a hard time to understand how the hell they can make money from selling me this crap…

If i bought only the variable capacitor in Norway, that is a single part of the radio, then it would have costed me more than the whole Radio from China.

Hey Bellows, don’t worry, not requesting a progress report (unless you want to provide one of course)

Actually I’m curious if you’ve ever come across a recording chip that records in 8-Bit and has the ability to sample at 16kHz?
If the answer is no, are you aware of any technique to use, say, more than one ISD chip to achieve it?

And if the answer to that one is no, what would be your advice if I wanted to make something that can specifically record in 8-Bit at 16kHz?

Hey, i’m really sorry for the lack of updates, but the thing is i have not had time or possibility to work on this lateley. I had to rebuild parts of my apparement because of some leakage from the appartement above that made fungus grow under the wallpaper. I had to completely rebuild my workstation and i just a couple of days ago was finished enough to hook up my desktop again. At the same time i have been struggling with a chronic sinusitis and too much to do at work.

I will come back to this once i got things settled and have the energy for it.

I am not aware of any recording chips that records in 8-bit, but i assume it exists in some form. I just looked up the datasheet of ISD15D00 and it seems to be able to record in 8 Bit and also at different sampling rates, but i’m not sure how to use it and i guess you need a microcontroller to make it operate like you want.

I read there are analog to digital converters that converts to 8-bit, but i assume that is not what you need. I would guess there should be a way to make your arduino record audio in 8 bits, but i don’t know. EDIT:http://www.instructables.com/id/Arduino-Mega-Audio-File-logging/ , not the exact sample rate, but maybe you can modify it to work as you want?

Just curious, why do you need 8-bit recording?

Sounds like you’ve been having some serious fun then, Bellows!
Sorry to hear all that, but good to hear things are improving

Can’t find a single one of those chips on ebay, although I did find a chip a few days back called WTR030:
http://en.waytronic.com/Private/ProductFiles/1849a9c6a40d889619a7.pdf

Looks to be better than the ISD chips, even does 16kHz, but sadly not in 8-Bit. I want 8-Bit at 16kHz cause I thought I’d make a 4 or maybe 8-voice poly sampler where each voice is run through an independent analogue filter. That would give a Fairlight CMI sort of sound as that’s the configuration it used. Just an idea really, I though seeing as I want to build a sampler, it might as well have the sort of sound I love about the Fairlight CMI. I’m looking into using the Arduino, it does seem the obvious choice due to it being 8-Bit. But in order for it to be much use though, I’d have to look into how to store the recorded data into some sort of memory module, cause the Arduino itself, no matter which model you choose, can’t hold much sampling data. As long as I can find some storage to record to and figure out how to do it, yeah I think Arduino would be the best way to do it cause I’d even have control over the sampling rate.

A good thing about the rebuilding thing is that made a much better solution than my previous bed mezzanine thing with the desk under. I instead made a plateau with a bed drawer built in. A lot more practical and gives me a bit more space for all the stuff i have collected because of my hoarding tendencies, i seriously have too much stuff.

I think you can use a cheap SD card reader module for your arduino for the storage, i think that is what they used in the tutorial i linked to.