…in older versions of renoise the “auto capture instrument” function would allow so that various instruments could be “captured” within the frame of one block. where as in the recent versions of renoise the switch was made so that a new instrument would not be “captured” until the next/new block triggers it. meaning…if i program inst. 01 at the top of block 00 and program inst.02 midway through block 00, inst. 02 wont capture unless i have a new block (block 01) where i program inst. 02 at the top. did that make any sense??? anyway…i am sure most of you remember the feature from previous versions and i know it was removed/changed due to a basic annoyance with the feature.

how can i get this back? serious…i need this function back…please help!!!

…is this something that could be done with renoise, with the code that has been made available for custom tweaks and such?

I thought Capture Nearest Instrument was exactly the same, just the button was removed from the GUI.

In fact I’ve just tested it with a single pattern song with two instruments loaded. Instrument 00 on line 0, instrument 01 on line 20.

Ahhhh… But you are correct, the Auto Capture Instrument does not behave as such. Not even when you go over the note of the new instrument. Wasn’t sure if the keyboard combination to toggle it on and off was working until I found where the setting was now to check. Agreed there seems to be a bug in the Auto Capture.

…i need to be able to simply put in intrument #'s (—10) not (c-410) so the instruments switch up while i am playing my controller device.

i will pay to have this option made available…no joke!

…i need to be able to simply put in intrument #'s (—10) not (c-410) so the instruments switch up while i am playing my controller device.

i will pay to have this option made available…no joke!

This sounds like it “may” be possible with scripting. I will have a look, but maybe someone can enlighten in the mean-time.

If you are playing through pattern with Auto Capture enabled when you change Pattern (at least by it playing through) it will always select whatever the LAST Instrument to have an entry in that track is. (First would make some sense but still not correct.) - This one is really worrying and confusing!

If you are stopped and change Pattern it will jump to the FIRST nearest Instrument in the Track after changing. Correct behaviour but only performed on pattern change.

Scrolling up and down over different Instruments in a Track makes no difference to what is selected whether Stopped, Playing, with Pattern Follow enabled or not.

Although it is called NEAREST Instrument, and that is how Shift+Enter works, I would more expect it to change as the cursor goes over the entry, especially when in play mode. IE read last note above it in the current pattern unless there isn’t one.

…i wonder, is this a bug? i have a vague memory of auto capture working, in the way we are discussing, in older versions of renoise. as well a vague recollection of the feature being “updated/tweaked” (due to user annoyance) to what it’s current state is. anyone else recall this? my work around for this is if i am trying to change between 4 instruments within a 1 block length and guarantee/allow for subtle human error( making sure the switch is ready on the “1”, so the inst. change is programmed a 64th or 32nd before the one) …this one block now becomes 8 blocks due to having to put what i call buffer blocks in to deal with the human factor. so i shorten the block prior to where i want a change to happen (subtract two lines) and create a block that is 2 lines only. anyway…if you read all that you know that it is a hindrance to the workflow.

Surely Auto Capture should work like hitting Capture on every line. Currently it only updates when you change pattern. Generally found it more confusing than helpful but can see why people would like it. Took me a while to work out where the button had gone (away) and to get used to the key combination when it changes but that’s all I thought had changed. I thought it used to work within the pattern as thought I had remembered having three or four hats in a track, trying to add one to a pattern and it changing, but maybe I was switching pattern.

Still when playing through a Song and going to a new pattern, jumping to LAST entry in that pattern to get Instrument is very weird IMO!

Just reinstalled 2.1 (oldest I have files without downloading) and behaviour is the same though, so not newly introduced behaviour.

…if this feature comes to be, it will make renoise a superior “brain” for playing midi controllers in a live setting…though it already is for me. all help/suggestion is much appreciated.

…is anyone else interested in having auto capture work this way?

…is anyone else interested in having auto capture work this way?

Well, I am not using that function right now, but I can see your point, auto-capture should work for every new instrument in a single pattern. But since I am just trying to visualize what you have described here, I will try to reproduce it myself to be sure what you mean.

please dont let this idea/suggestion die. the great benefit of this function would be that in a live setting you could have pre-programmed inst. changes.(programming the inst.# only and not a note) like for me, i use an electronic drum kit to trigger superior 2.0 and also breaks that i cut up. auto capturing at any point in a column would allow me to do very quick inst. changes so i can bounce between any number of drum kits/inst. within one column of one block. the big benefit of auto capturing anywhere in a block comes when you consider that a human may be a hair fast or slow, so being able to put inst. changes on the very last line of a block (3F) allows for that slight buffer so the sound change always lands solid(human solid) on the one of the next block. i know not many are using renoise for live performance, but anyone who is and who is playing midi keys,drums,guitar…with renoise while they play backing tracks will find this usefull.

I just recently used auto capture instrument for live performances so I wasn’t sure about it previous behavior.
But I think you have a point here, it should change to the instrument that is under the cursor when it ‘walks over’.
Then Again, I’d think a better solution is to be able to map Midi controllers directly to instrument slots maybe something like here 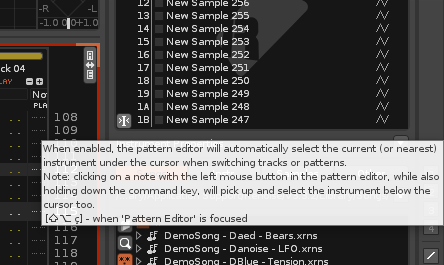 By auto capture you mean this?

Really annoyed how my instrument of choice switches automatically, even with this button deactivated. In Renoise 3.3.2