Automate Instrument Meta Controls - Can this be done?

Hi. I’ve been using Renoise on and off for 12+ years, but this is my first post on the forum. I’ve been really getting really back into Renoise recently, and have been exploring new features.

I really enjoy using Renoise more as a synth than a sampler, making sounds from single wave cycles, using the instrument modulations and effects to shape the sounds. (Basically subtractive / wavetable style sythesis.)

I’m trying to achieve a particular thing but so far I can’t find a way to do it, although I can get close, so I was wondering if maybe I have just missed some crucial thing that might get me there…

So, to explain the exact thing I want to achieve: I’m working on an instrument, and I’m in the Effects tab of the instrument editor. I’d like to add an LFO to modulate volume (or filter cutoff, etc). Then, I’d like to add an envelope to control the frequency of the LFO itself so that it changes over time from slow to fast.

As far as I know, there’s no way to automate this in the same way we might automate it in the pattern editor. (Is that correct? Please tell me I’ve just missed something!) I can get quite close to what I want by adding an additional LFO, and using the “custom” modulation envelope editor to draw the envelope I want. The problem I have is that I can’t see a way to sync this slow-to-fast modulation to the actual note trigger such that it retriggers the envelope from the start when I press the note. Instead it just loops constantly, independantly of the note trigger.

Is this something that can be achieved? Perhaps I’ve missed some meta controller or something?

I was thinking / hoping that there could be some kind of meta controller that works basically like a stripped back LFO, with just the custom envelope, and which is synchronised / retriggered by the note trigger event.

Actually, all that would be needed would be a “retrigger” tick box on the LFO that would retrigger the custom envelope on note-down.

One idea I have for this is to hand draw an envelope in a second sample, and use a signal follower to automate the parameter. I’m not sure if that would work, but it’s worth a try. (I’ll report back on it.)

Thanks for any advice you might have for me. I’m keeping my fingers crossed that someone is going to point out something I just haven’t discovered yet.

You can achieve what you want with a Velocity Tracker and using the ‘One Shot’ toggle in a custom LFO. The video below shows you how to set up a variation of what you’re after: 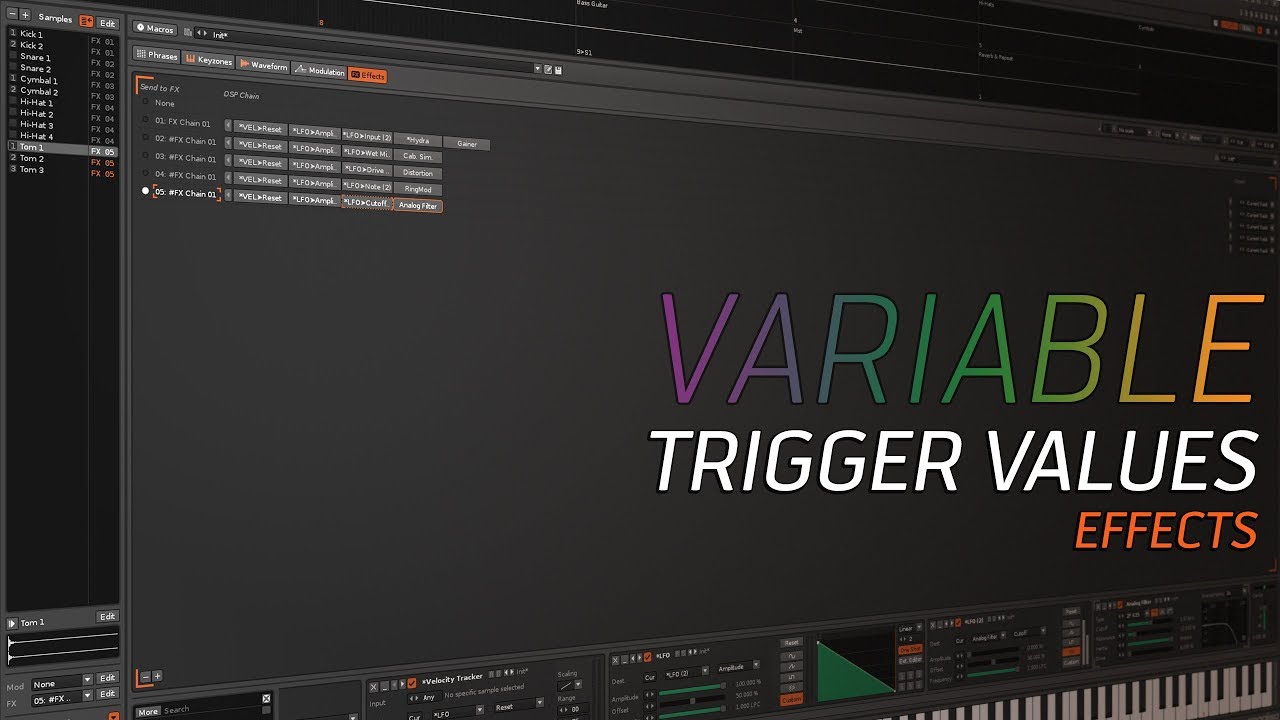 Well, I was actually able to accompish pretty much what I was after, although in a more roundabout way.

The idea I proposed at the end of the post actually worked! I added a new sample to my instrument and drew an ascending diagonal line on the wave form, then used that signal to the modulate the LFO frequency using a Signal Follower.

Then I thought of an even better way to do this…

Instead of using the sample itself to draw the curve, I created a much shorter sample and gave the entire sound a value of 1.0, (ie I drew a line along the top of the wave form, so the sample will always output a value of 1.0). Then I used the normal volume envelope tool (which is a lot more precise to edit, giving a nice smooth curve.) Then I used a signal follower in the same way as the first time, and it worked! It’s a slightly convoluted way to do it, but it’s great that it’s possible to do.

The only drawback with this approach is that the modulation is on the effect, so it’s a whole-instrument thing. It would be nice to be able to do it on a per-note level, but I guess that’s not possible right now.

EDIT: I thought this was pretty clever, but I’m glad there’s a much simpler way to do it.

@Achenar - Thank you very much for that link. I’m going to try that technique right now!

Edit: I see now! The Velocity tracker makes the LFO reset with each note. That’s perfect. It’s basically the “retrigger” tickbox I proposed above. Thanks again, I’m really happy it turned out to be so easy.