Automatic decay when releasing a key

Is it possible to have a sample end smoothly when a (MIDI) keyboard key is released, instead of cuting abruptly. Someting like when the key is released it will go immediately to the Release (of the ADSR) part of the sample ?

The first thing I would check is the sample properties - if the sample NNA is set to “Cut” then choose “Note-off”.

Actually, this setting doesn’t decide if the sample has an release stage but rather, what happens when a new note arrives (NNA = New Note Action, very useful for controlling how overlapping notes should behave).

If you then press and release a single key, but the sound is still cut off abruptly then it might be an envelope (volume or filter) that has a steep falloff?

Thanks ! This made me discover the Volume Envelope in Modulation. This is the Beginners’ section, after all

See attached, sections are highlighted. Why is there such a time discrepancy between the curve displayed in the large box and the one below in the Volume Envelope. The one in V.E is much more intuitive to work with as it represents more what is going on. What is the purpose of the curve above to be so steep ? 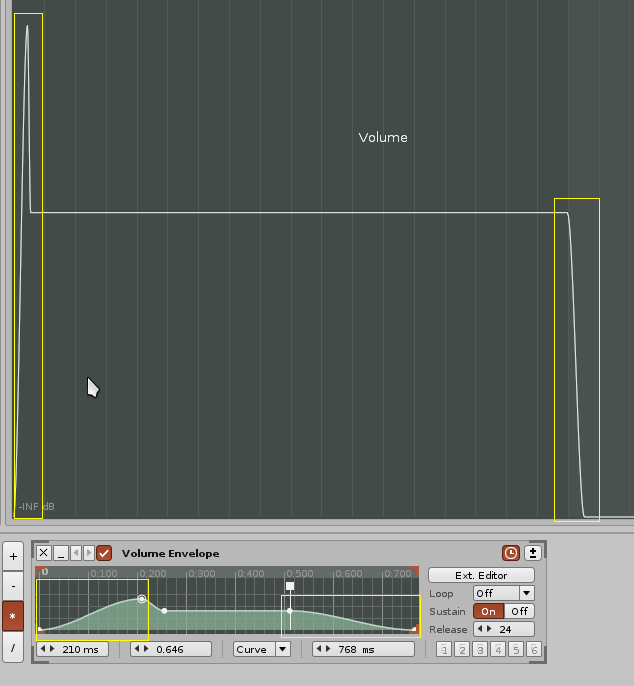 The gui is there for an overall overview of the modulation … there is no ( accurate) time indiciation ,

Yes, and the Ext. Editor shows the actual details.

The modulation graph is used to show more than just volume envelopes, which is why it’s useful to show a longer time period that is not tied to the length of any one envelope, but rather to a generous portion of a note, and is metered by beats which are grounded in the song BPM, and not different envelope lengths.

You can then flick between different modulation types, between volume and filter changes and all the rest, and get a coherent picture of all the things that change.

As you’ve discovered, the external envelope editor can provide as zoomed-in a picture as you like, but I think it makes sense to have a static and longer graph for the modulation section in general.

The 210ms attack in your envelope may look a bit short in your 12s modulation graph when compared with your 768ms envelope graph, but that’s to be expected.

At first it seems silly to show the sustain stage stretched over many beats, and attack and decay only being little bumps when they are short…having conventional adsr action in mind.

But you can combine a lot of devices for each modulation, and also combine stuff like faded in LFO with the ADHSR - the long sustain stage in the graph is then needed to see what’s going on while the note is held and for my example the LFO is fading in oscillations.