I´ve got some free single cycle waveforms that dont have looping option saved inside them.
(these:http://www.adventurekid.se/akrt/waveforms/))
I´ve already suggested that renoise should set looping option automaticaly “on” for them because it is pain in the a*s when you switch these samples and you have to change looping setting everytime. We didnt come to solution but:

New Discovery Pro VA from DiscoDSP came out yeasterday and it solves this problem with this:
Every single cycle waveform shorter than 2048 has looping option set on.
http://www.kvraudio.com/news/discodsp-updates-discovery-pro-va-and-wave-synth-to-6-4-2-27911

So i would be very happy if renoise would have it also. Thank you

I suggested this a few months ago and was told it wasn’t possible for some ridiculous reason, Ableton sampler also does this perfectly.

We could obviously have an option to toggle the auto-looping feature, and then probably another value to set the threshold for the number of sample frames to loop, etc., but then it just adds more clutter to the options, and creates more things that could potentially confuse and annoy the heck out of people. I’m not saying that such features are an impossibility, but the problem here is not Renoise — it’s your samples that are lacking the correct loop data.

So I think the better approach here is to just fix your samples. You only need to do it once, and then never worry about it again. Many dedicated audio editors have batch processing modes that can hopefully take care of this quite easily for you.

Wavosaur, for example, comes with a batch processing preset to do exactly this task: 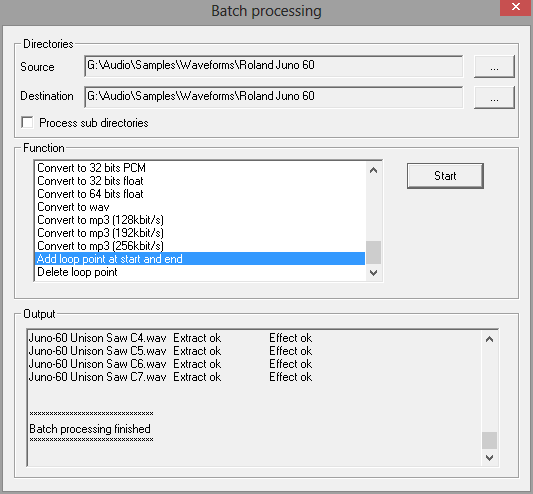 If you’re not on Windows, then maybe you can get a friend to help out.

Heck, someone could probably even make a Renoise tool to handle this.

Thank you for your tip

and i have single cycle-waveforms from adventure kid, from Rapture and from Dimension. Every of them would be automatically looped with this feature.
so i still think that Renoise should do it natively like a lot of other samplers :-).
Sorry.

Or just have that option you mentioned…

Or…
When you set looping option (on or off) it stays same when you swap samples (not when you pasting samples into new instrument…).
Something like that would solve it also.

i have single cycle-waveforms from adventure kid

I have the same sample pack. It only took a few minutes to fix all 4000+ samples, and now I never have to worry about them again. Regardless if these new Renoise features are added in the future, I’m simply pointing out that you can easily do the same thing to fix your samples right now and then get back to important stuff — being creative!

Yeah, i will find something for linux, thanks.