automating or fading in to a repeating pattern

Let’s say I have a pattern that repeats several times, but the first couple times it repeats I want to fade in a synth of some pads. How should I do this?

Right now I have the single pattern and the repeat patterns are aliases. But automating/fading in the first pattern affects the aliases, which I don’t want. Another approach is to create a new pattern (non-alias) and paste the pattern matrix slots into it as aliases. That way the pattern can be automated separately while still having the components be aliases so that further changes later on affect all the patterns.

Is this how people usually do it? By creating new patterns instead of aliases, it seems to make things a bit more complicated (more things to keep track of). I rather just have 1 pattern, plus its alias repeats, with the ability to fade in or automate in a way that only affects the first instance of the pattern.

Unrelated question: In the sampler when using a scale the keyboard keys of that scale are shaded a different color. Where could I change the color of this? I can’t seem to find it in the settings. The theme I’m currently using has the shading as a light gray which makes it hard to differentiate.

Use a send track for separate automation

Use a send track for separate automation

Thanks for the reply. Unfortunately I can’t seem to get it working. As an example I have the same pattern repeated 4 times. The first 2 tracks are drums and are routed to S01. 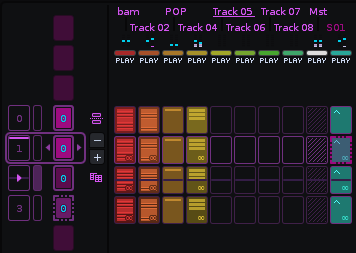 From there I automate the volume envelope in S01, intending to just affect a particular pattern instance, but it affects them all.

I wouldn’t be able to fade in the drums because it creates the same envelope 4 times.

Ah, I see now. I misunderstood what you meant by aliasing patterns.

You are repeating the entire sequence in the pattern sequencer, so everything in that row of patterns is repeated.

You need to alias specific track patterns (or “matrix blocks” as they’re described in the manual), but in separate sequences.

Do not alias the send track blocks. That’s where, over the course of multiple blocks, you do the automation

You need to alias specific track patterns (or “matrix blocks” as they’re described in the manual), but in separate sequences.

Yeah, that’s what I’m currently doing. Just wasn’t sure if that’s a good way to do it or if I was missing something obvious. It works but creates more details to keep track of like “sequence 5 and 12 aren’t aliases but have the exact same blocks, and one has a fade in”.