So, my mate Ollie that runs our local music scene ‘hub’ site http://southwestunderground.net wants to close down the forums:

"The forum software we use on SWU is up for renewal next month, and im considering not buying a license this year.

IMO social networking has changed a lot since the days of facebook myspaz etc and made the forum a little redundant now, we still get around 600 people a day viewing the board, but it 90% lurking, the user input is very low.

Most users dont even venture on to the boards and just read news / event pages / tickets and radio.

if anyone strongly feels this channel of communication is still important do say so. ive been thinking about it for a little while now and i think it may have had its day."

SWU.net began as a forum and I reckon it should keep a forum, even if only a dedicated few use it!

Which leads me to my question (I know a lot of you guys work in IT and websites):

What is/are the best FREE forum software(s)? (in your opinion)

Or do you agree with Ollie and think that forums are dead!??

I plan to add a forum to my own site soon, and I will probably go with this package, rather than phpBB which is what I have used in the past. The overall impression I get from peoples’ comments online is that SMF is more secure, more flexible, lightweight, easier to configure, easier to theme, etc.

Here’s a very handy site that lets you compare all the main features of various different forum packages:
http://www.forummatrix.org

Whether forums are dead or not, I’m not sure. Sites like Facebook have definitely had a big impact on things, but clearly it’s still possible to have a thriving forum-based community - just look at this one.

In other news, best CMS = Wordpress

In other news, best CMS = Wordpress

man wordpress is pretty okay from a user standpoint but the code is janky as a mafucka. :s

on the topic of forum software:
if you haven’t yet, you should check out FluxBB. i’ve used vanilla in the past and it was okay…gotta say that the upcoming 2.0 version looks pretty damn nice, though.

man wordpress is pretty okay from a user standpoint but the code is janky as a mafucka. :s

The thing about wordpress is that it’s amazingly customizable due to all the really solid plugins for it. I thought joomla was customizable until I gave wordpress a shot… now I realize joomla was a joke. Every joomla site LOOKS like a joomla site… but you can’t usually tell when sites are powered by wordpress right off the bat.

if you say so, man. i maintained a number of wordpress sites professionally for a bit and, let me tell you, some people just don’t know how to write PHP…but, even worse in my eyes, wordpress doesn’t provide much of an API. it’s just a whole hodgepodge of functions without much OO design and it gives you plenty of rope to hang yourself. the biggest problem I would see is that plugins would do inordinate amounts of SQL queries because of poor coding. arguably, it could be the coder’s fault, but wordpress doesn’t even try to provide a safety net…i dunno. i have been suppressing rage about this, perhaps!

Granted, I’m sure some plugins would bog down under the traffic big websites get… but I’ve got a whackload of plugins installed, and my site runs well: http://bytesmasher.com/

I’ve never had an issue with it.

I’ve liked phpBB for the most part–modding it to do extra things than the standard can be a chore, but in general it has done me well. http://kizzumeforum.com

I used to use yabb www.yabbforum.com/ for my forums and it was great! now I use wordpress and don’t use many forum-like features. i <3 wordpress.

I tried SMF, but ended up liking phpBB3 much more. It’s very luxurious.

AFAIK SMF is not GPL.

And I think SMF has this “security through nobody-uses-it”-principle. phpBB has not been hacked or wormed since version 3.0 - which is because the devteam spent a lot of money for a complete security audit.

Oh, and I made the music for the phpBB codeswarm.

SMF has some interesting mods out there, but I think phpBB has even more.

Haven’t tried phpbb3 tbh… I’ve tried phpbb 2.somethingrather… but that was a while back.

Haven’t tried phpbb3 tbh… I’ve tried phpbb 2.somethingrather… but that was a while back. 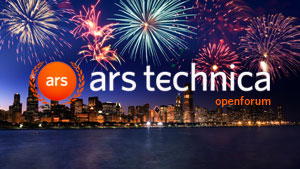 The Ars Technica OpenForum is migrating to a new forum system. Details inside.

Finally, over the past five years, and especially the last three, there have been huge jumps in the quality, scalability, and scope of open-source forum products. Believe me when we say we’ve evaluated and reevaluated nearly every option over the past ten years. Year in, year out, we felt as though we had no options. Suddenly that changed with phpBB3. Many of you might be more familiar with its predecessor, version 2. While a decent product, its popularity meant it had its fair share of security issues. When the project came under new management and version three was released in 2007, there was a marked improvement in the area of code cleanup and security. To underscore its commitment, prior to the release of 3.0, the team had an independent third-party firm perform a security audit on the codebase which revealed a list of issues—which were promptly fixed—along with recommendations for proceeding with development in the future.

Having spent the better half of a year poking around in phpBB3 for use with our commenting system, we here at Ars are pretty impressed with the level of paranoia in the code base and we’re emboldened by the fact that since its release, not a single significant exploit or vulnerability has been found in the phpBB core software. That alone is pretty impressive.

phpBB has also proven itself extremely capable when it comes to serving up a great forum experience with features exceeding our previous forum’s abilities. It also does this at great scale. We talked with people who run forums larger than our own. Those using phpBB had nothing but praise for the platform and are operating these boards with impressively “minimal” levels of hardware given their load profiles.