It would be nice if Renoise would show some kind of an indicator for those notes that haven’t received note off message, so it’s clear that the note is still playing. Especially useful in case of those notes with Autoseek on that span over several patterns.

Here’s how Sunvox handles it, showing a bar under those notes that are still “on”. It makes things much clearer. 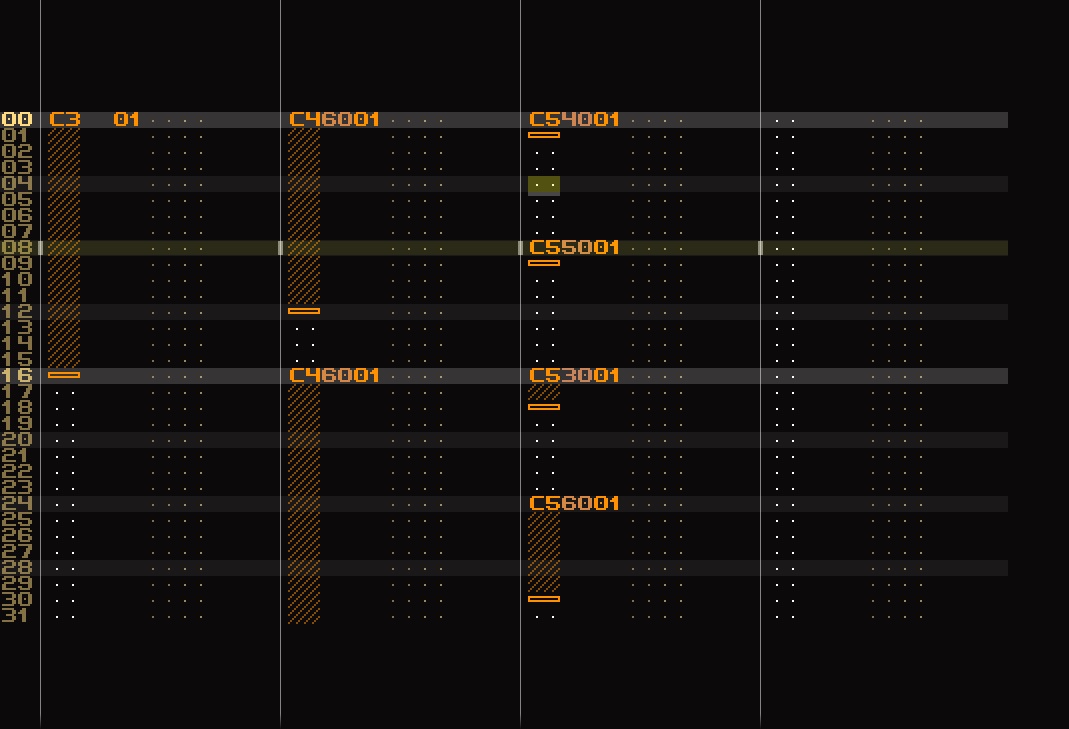 I like the idea but what happens to samples where you don’t use note off like on drum samples that just play out, and when you pitch glide samples the length of the note changes (maybe it’s possible to calc the length and cache this for performance purposes)?

Yeah, it can get a little tricky with the different NNA modes etc. If Renoise would be able to calculate the sample end, it could work. And I believe Autoseek already shows this capability to some extent. Somewhat limited though as it doesn’t work with pitch modulation and it might take some extra CPU to have Autoseek for all the samples enabled.

If samples showed their waveform in the background and VST instruments showed as on the picture that’d be cool.

Maybe it’s just me, but I absolutely wouldn’t appreciate if waveforms would be shown in the pattern editor. Seriously, who wants his songs look like a mess like this in Radium? I would lose the overwiew for sure. And vertical waveforms? No way! What would be the advantage? I don’t get it. The max for me would be like as shown in your first picture, that would be ok. But if you ask me it’s also not really necessary. I prefer it as clean as possible. But I’m an old tracker guy, so as I wrote, maybe it’s just me…

That does look a little messy, the waveform shouldn’t move around like that and it should be like 30% transparent and be subtle behind in the background of the track IMO… the main thing is you can see the waveform so you can align sounds together.

Maybe it’s just me, but I absolutely wouldn’t appreciate if waveforms would be shown in the pattern editor. Seriously, who wants his songs look like a mess like this in Radium?

Haha omg, what a mess. I’m so glad that Renoise devs ignore the people who ask for a waveform view in the pattern editor. In my opinion it’s against the basic principles of trackers. I mean you can use Reaper or Cubase instead if you want waveforms.

the main thing is you can see the waveform so you can align sounds together.

Trackers were never meant to do whatever it is that you want. There are easy workarounds for aligning sounds. If you need to see waveforms so badly then Renoise is probably not the DAW for you.

I am in agreement with this. Renoise, while initially confusing (coming from typical DAW environments), makes much more sense without the visual distraction of waveforms. Radium’s waveform visualization is so hectic, along with all the other controls available (and there are many), that it takes concentration to actually enter musical data. I do not want to expend extra energy having to think even more upon entering data, while having to ignore the colorful, flashing interface.

This being said, I also recognize some people need the extra stimuli. Everybody’s different. I prefer to keep the Renoise interface the same.

the main thing is you can see the waveform so you can align sounds together.

Trackers were never meant to do whatever it is that you want.

I just want to say that with Renoise (and with tracker concept in general) you easily make more music with your hearing. U kinda start seeing with your ears and can align sounds from there ; ) So you make music more with your ears, feelings and instinct.

i am not against waveform-view, just a thought …

ROFL… @idem345 I have used trackers since 1985 and trackers is my thing and I’d like a visual presentation of the waveform if possible. That’s all. Obviously this should also be an option for haters of it, same goes with pianorolls and stuff like that.

Raegae, yes, we have made do so far so that’s obviously possible, but with long samples you get easy overview and we now know, well at least I do that aligning samples aren’t always very easy even with your ears… and you can even align things without even hearing making it even quicker

Anyway it’s far from something I need, like at all, but it’s still something I would use unless it look as horrific as in Radium.

I’ve been using trackers since Amiga 500 days and am very much used to the traditional tracker style of showing the notes, but it doesn’t mean that bringing out some new ideas and features is necessarily a bad idea. Combining the tracker interface with some visualization options that other DAWs use for linear sequencing, why not. I use lots of other sequencers too for my work including Logic Pro, Reason, Reaper etc. but always feel drawn to Renoise, thanks to its fast workflow.

Anyway, we are really just talking about the different ways to visualize the note data here and like Garf mentioned, it could all be optional and turned off when needed. Nothing of this would break the tracker paradigm that we all here love. Clearly there is demand for these kind of features, and not just from those new to trackers but also from many long-time tracker users.

Of course all of this should be done in a way that it makes things more clear and not messy. I tried out Radium but didn’t like it for the very reason that the interface looks like a mess. Renoise is very elegant and polished when it comes to the UI and any added features are clearly carefully planned before implemented. I’m sure there is a way to implement the note lengths and possibly waveform view too so that it doesn’t look like a mess but instead can be helpful.