I am currently trying to find a good way to let me switch the volume on certain channels on and off whenever I play or release a note to create the typical complextro sound. Right now the best solution I could come up with is adding a Gain effect to every channel involved to effectively mute the track whenever it is switched on. Unfortunately this results into quite the unreadable mess after a while. 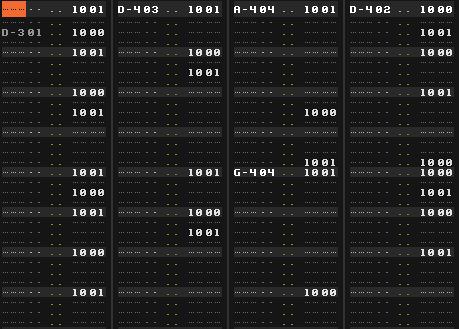 I tried to experiment with Key Trackers which I thought would allow me to affect the on/off state of a effect device whenever a note was played but this didn’t quite work the way I expected. The signal follower seems to work better but I’d still end up with one control track per instrument track which only distributes the mess pictured above over even more tracks.

My prefered solution would be a multitrack switcher (similar to an A/B device but supporting more than two channels). A8X looked promising but somehow it’s not possible to specify which input channel a Send Device should route its signal to in Renoise.

Anybody got a helpful tip?

I don’t get the scenario that well yet. You want notes of instrument switch gainers, but what should be the logic behind the whole effect? To switch the track on only when a note is inside it? Or to also switch off other channels?

I have one trick in hand to get rid of all the extra control data. Add some sample (dc loop, a sinewave loop, whatever is nice and steady) to the instrument that is a “switcher”. I think you can add such to Plugin instruments also. Go to the effects tab, and route the sine to an extra channel you created. Route that channel in the rightmost drop menu to an extra track that is for the switcher exclusively. Put signal follower into the extra channel, and let it control the gainers of choice. Put down the channels mixer to make the switcher inaudible. Make sure to control gain and not on/off for smoother operation. You can control multiple gainers from a signal follower by putting a hydra in between.

Renoise can’t serve multi -in plugins, you have to work around.

I don’t get the scenario that well yet. You want notes of instrument switch gainers, but what should be the logic behind the whole effect? To switch the track on only when a note is inside it? Or to also switch off other channels?

The idea is to have four (or more) channels play simultaneously but only hear one of them at a single time, depending on which key is pressed. This is what the above example sounds like - I put some emphasis on the individual channels’ panning to make it easier to distinguish them.

In the example above the effect columns switch on and off the gain of each channel, but it’s quite a pain to make sure that all the other channels are muted whenever one is playing. If there was a way to setup a channel to turn on/off several target channels’ gain it could all be controlled from one single column, which would also allow some live experimentation - right now I have to take educated guesses and move around the 1000 and 1001’s.

Here one example switching 4 channels/gainers with pattern comands. Sorry, no sound, I’ve got other work to do.

Ohhh, this is so much cleaner!

I don’t think I could have done this on my own, though at least I understand enough of it to expand it beyond the initial four tracks.

Thank you so much!