Very long time since I posted here, but hey;

I bought the Cristian Vogel thing, which he set up on one of those hipster sites saying that you would get it when it was made, and now he is saying that he is not going to give the full album in XRNS to those who initially bought it, even though there was no warning of this on the initial site which was asking for money in the first place.

Not only this, but the XRNS track were a lot more money than the standard album price.

I work in the building trade, and this sort of thing is called utter utter lies and bullshit, from where I am from.

Not happy with his use of Renoise as a marketing tool, especially considering the extra price he is charging for the XRNS files.

I don’t understand. A different site than pledgemusic.com?

In a previous update he posted:

So, not all the album tracks were made with Renoise. He uses Renoise as one part of a bigger production arsenal, which is cool with me. I pledged for XRNS and knew what I was getting into.

You aren’t eligible for the XRNS files or something? Have you tried emailing him? If push comes to shove, I got no problem sharing the XRNS files I get…

now he is saying that he is not going to give the full album in XRNS to those who initially bought it, even though there was no warning of this on the initial site which was asking for money in the first place.

On the Pledge page it actually says:

Exclusive RENOISE .xrns files of some of the album tracks.
See how they were programmed, and feel free to remix the sounds ! (please see renoise.com )

We received a question about the ReNoise files (XRNS modules). They will
be sent out during the week of 13th Feb. They are not all the album tracks,
as some of the tracks were made in a different way.

I’m sorry that you feel like you’ve been duped or tricked in some way, but I guess he simply didn’t make the entire album 100% with Renoise, so you’ll only get the .xrns source files to the stuff that was actually done in Renoise. I think that’s pretty fair enough, isn’t it?

Thanks for your response.

Look at how he prices it on the right hand side of the screen. It is very tricky.

I will be telling all my friends in Japan to avoid him.

Look at how he prices it on the right hand side of the screen. It is very tricky.

Still don’t understand. We’re talking about PledgeMusic? I doubt Vogel has much control over anything placed anywhere.

Basically, set up an account, ask for donations to help reach a goal.

The goal was to produce a new album, not give away XRNS files. That’s just a perk for donating.

He’s, like, one of a thousand artists on there. All the pages look the same. His fan base far exceeds that of Renoise users. I think you are reading too much into this.

I haven’t been following this pledge thing at all.

Has it been confirmed how many tracks are going to be on the album, and how many .XRNS files will actually be available?

very old post but i’m looking for the vogel xrns files.
the pledgemusic url is now unavailable
can someone share theses xrns ?

i’m not sure i get what’s going on here.
there’s a claim “all songs”, posted by original poster. others go to the page and read what he wrote, which was “the songs made in renoise will be available in xrns, the songs that weren’t made in renoise won’t be available in xrns”.
he can’t very well go and make non-renoise songs into renoise songs just so one guy is happy, right?
what would be the sense in that?

i have xrns versions, dunno if i can share them here though (you can pm me but i will be busy/unavailable till 22jun) 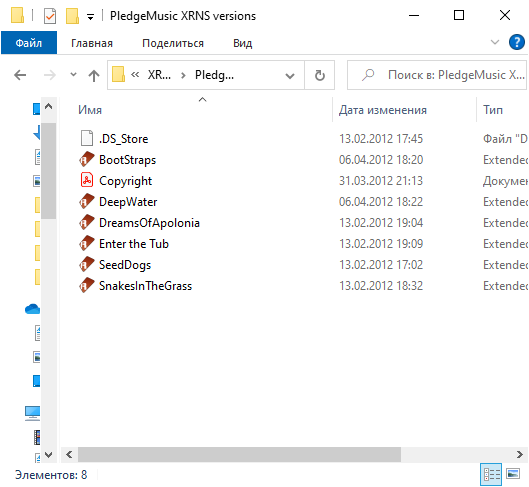