Over the years I’ve collected many DSP effects that came with Renoise or VST’s (Native Instruments is very good at that).
Now, since the list in the lower left corner of the screen is so small it’s sometimes a hassle to quickly scroll to the effect that you want, even with favorites (which makes the list only longer since the original fx stay in there too)
I thought it would be nice if you could just decide which DPS’s would show in the list and which wouldn’t.
So here’s my idea:

Cool ; or we could drag items from the listview and drop them up or down,

freely with the mouse,

Have you had a look in the right click menu? 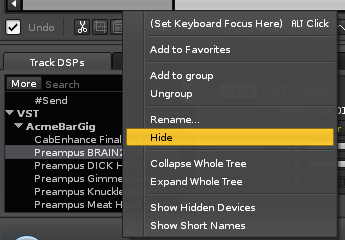 I always just start typing into the search box anyway. I never bother scrolling around the list.

I hide the whole FX list. Just use the SirDancelot tool

(You need to set one or two keyboard shortcuts and then you’re set. I use Shift-F, then type part of DSP name, then sometimes space to deactivate, then enter)
Try it. If you like Renoise for being quick with navigating, and keyboard control, you’ll really like SirDancelot.