I’ve noticed that when I have a phrase in edit mode, I can alter it with my laptop keyboard or by clicking the onscreen keys, but not with a MIDI keyboard. The MIDI keyboard just triggers playback of the selected phrase. Is this intentional? Is there anyway I can edit a phrase with my midi keyboard?

There is no live recording mode. You must program phrases via the computer keyboard, step by step.

Even if it doesn’t do live recording, it would still be nice to program with the MIDI controller. Thanks for the quick response.

I would love to see something like “catch midi input”
it would listen to midi notes and record them into the phrase in realtime (so you can use your midi device, daw pianoroll or some midi plugins like Cthulu or Kirmu Cream to create Redux phrases) but i understand that it is very difficult task (because of timing etc).

and then something like midi output of course so you can layer redux with another vsti and use the same sequence / phrase (very powerful together with DAWs with advanced routing like Reaper, Tracktion, Mulab or Studio One V3).

This really dissapoints me - makes me quite sad, with a big dollop of ‘baffled’…

surely (shirley?) the whole point of any musical editing system of any worth is to allow you to both record live input and edit manually.

that’s how trackers started, and continued, its what we do with piano rolls in every DAW, and to tease us with ‘tracker capabilities in a vst sampler’ without that ability is a big bummer, as i really hoped redux would be the cool thing to get me tracking more.

i appreciate there are timing/host sync issues involved, but these must be surmountable:

even if a user is limited to having to play their host DAW whilst redux goes into a ‘live record’ mode where phrase and other playbacks are suspended, and/or user has to wait for beat1 of bar1 to come in on sync before inputting notes, this is not a problem. i just want to get some live playing into a ‘phrase’ - PLEASE!

having to load up/rewire renoise to do such a thing is unrealistic and missing the point, the point is you have just stumbled upon a killer combo of samples you are playing back via midi keyboard, the basis for a great hook or beat etc, and you want the guts of that to be inputted into the tracker/phrase so you can then edit and mangle it with all the redux/tracker toys. its win win.

I was all ready to purchase using my (thankyou) renoise owner discount, but atm i am wavering as it seems ‘mostly’ a cool editable sampler, when it could so much more as a creative and musical tool.

really hope this can be looked into, its almost so great!

I am discovering Redux and I was very surprised to see that I could not edit patterns with my midi keyboard too.

Naturally, I have one hand on the midi keyboard and an other one on the up/down keys or mouse wheel.

Mapping the samples to the midi keyboard seems so natural, even in step mode (I am not good enough for real time performance recording, even for simple stuff

Please, Renoise team, would you consider implementing it ?

Reason why we skipped that (at least for the initial release), is that it’s not always possible to separate between MIDI that comes from the host’s sequencer and MIDI that is played live (from your MIDI keyboard). There are flags in the VST and AU protocol to distinguish such MIDI messages, but not all hosts support it, or not reliably support it.

When this is not supported, it would then be really really annoying when you started sequencing Redux in the host - triggering its phrases, then switch to the phrase editor in Redux and it then starts recording “random” MIDI events, MIDI events that previously triggered phrases in the host.

Second reason is that this would need yet another toggle/switch, to define what happens with incoming MIDI messages. It certainly also is useful and intended to trigger phrases from your MIID controller too. Would simply be great to avoid that, because it’s one more reason for a “WTF why does it this now and not that”.

And finally: Renoise is a tracker. Trackers use the computer keyboard to edit stuff. So we can at least clearly distinguish how to trigger (MIDI) and how to edit phrases (keyboard) in a system that already is pretty damn complex.

it would then be really really annoying

No, it would be really really cool, since we then could record MIDI items from the host into Redux (and by this eventually into Renoise).

Reason why we skipped that (at least for the initial release), is that it’s not always possible to separate between MIDI that comes from the host’s sequencer and MIDI that is played live (from your MIDI keyboard). There are flags in the VST and AU protocol to distinguish such MIDI messages, but not all hosts support it, or not reliably support it.

Reliable operation is of course absolutely essential, so I for one understand this decision.

But it’s quite frustrating, andmakes me wonder if custom MIDI inputs in the plugin itself would be a viable alternative?

At least, it would be worth investigating if various DAWs support this - I know I made it work in Renoise a few years back, with a homebaked VST.

But then, Renoise is of course just one among many possible DAWs, so - again - this sort of thing might also not be possible ‘across the board’.

Edit: and if it’s not possible to access MIDI ports in the plugin, perhaps incoming notes could be separated by their channel instead.

No, it would be really really cool, since we then could record MIDI items from the host

Indeed - but optional, or you’d find it really frustrating. The ‘solution’ above could allow this, and more.

I am new to fantastic(!) Redux. Using my midikeyboard to write notes into phrases, was one of the first things that I wanted

to do. Yes, it would be very cool, if this would be possible one day.

still hoping that this can be implemented somehwo .

I can understand the complications in terms of Redux, but what about Renoise by itself. I might be missing something that was already explained, but, why can’t I edit phrases with MIDI keyboard in standalone Renoise when there’s no possible incoming MIDI coming from outside.

Please, also, Danoise’s ideas of targeting specific MIDI port within Redux seems like a viable thought. Please, give us an option for this!

Dear Renoise team, please send us a small sign of hope. To me, how I use Redux, this is a show stopper for Phrase editing. I can’t work like this, entering notes with keyboard. And the Phrase feature was the main reason I bought Redux …

I still think the aforementioned idea of a “Catch MIDI Input” button for switching this behavior seems workable. It’s not that Redux isn’t aware of incoming MIDI, right. But rather that it needs a way to know what to do with that input. So, then, a switch to manually tell whether to use the input for note writing in Phrase Edit, or, actually triggering Phrase Patterns, seems logic, at least in my mind. I’m quite sure that a majority of Redux users are looking for this functionality. Anyway, I don’t want to sound grateful for this golden gem that Redux is. I own both HALion and Falcon, but I hold Redux as the #1 sampler instrument on the planet. It’s just this quibble…

There are flags in the VST and AU protocol to distinguish such MIDI messages, but not all hosts support it, or not reliably support it.

lol, yeah, host support for this is abysmal, and AFAICT, whitelisting is the only way to really just auto-enable behavior that expects the host to handle this correctly.

Second reason is that this would need yet another toggle/switch, to define what happens with incoming MIDI messages.

Consider me a +1 for please adding it anyways! I’m sure the UX is manageable in some way.

Renoise and Redux may be trackers based around the computer keyboard, but that’s not really appealing to me. I only ever enter notes into Renoise with a MIDI keyboard (even bought a portable MIDI controller for it), and not being able to do the same in Redux makes me shy away from it… I’ve got enough computer-keyboard-to-MIDI-note mappings stuck in my head from other apps that it slows me down in Renoise (granted practice would fix that), plus the computer keyboard lacks velocity input.

Maybe Redux’s preferences could have a checkbox that makes it so Redux has 3 edit states? Off, Computer-Keyboard-Only (Phrase Trigger Enabled), and MIDI+Computer-Input (Phrase Trigger Disabled)…

Damn, you’re right that this gets complicated

I’d still like it though, even if I had to deal with complications as a user to use it.

Ok, I’m going to give Redux a shot anyways (I’m trying a switch from Logic + Renoise, to Bitwig + Redux), and I’ll just have learn this keyboard layout, and be done with it.

So by the time you could even get around to implementing this, I’ll probably not even want it that much anymore anyways, so I guess my +1 carries even less weight now than the little that it carried before

Still seems like it could be useful, if you do manage to figure out the UX though.

I hope they allow us to do this in the next Renoise update. This is highly necessary.

In the meantime, while waiting / hoping for this to be implemented, I was thinking there might be a dirty solution for this, using AutoHotkey. Unfortunately this is a Windows-only hack, but for macOS I’d suggest something like Keyboard Maestro or even BOME MIDI Translator, albeit those two cost a bit. (For Linux, I’m sure there are similar solutions out there.)

Anyway, in AHK, one should (in theory) be able to bind a hotkey to toggle a script on and off. Then, in that script, you’d map MIDI notes to keyboard keys corresponding to those used in Redux for playing notes. Shouldn’t be too hard, although I don’t have the time for making it myself currently. Anyone?

Stumbled upon this thread while looking for a way to input MIDI directly into the phrase editor.

Having read the developer’s explanation above, I sympathize with how adding a toggle would make a crowded interface even more crowded. But, not making this up, when I first tried to input MIDI into the phrase editor I squinted looking at the bottom row of the phrase editor looking for a button that said “record midi” or something similar.

It’s a bit awkward but I discovered a simple workaround: record your phrase into a blank pattern and then copy-paste it into the phrase editor.

not Redux, but Renoise, here Noodletrapcan be used for pharse based recording perfectly … 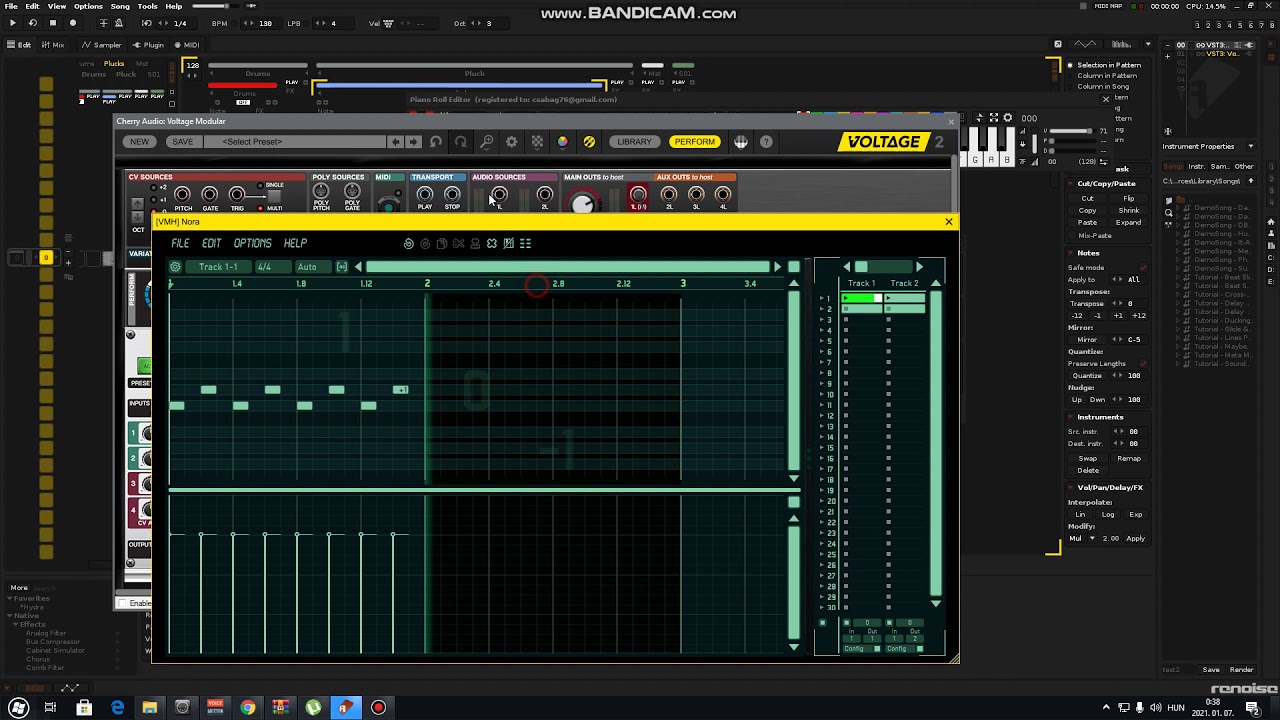 and the whole can be edited with PRE New tool (3.2.4): Piano Roll Editor v8.3 build 321 (November 2020) (which can’t see phrases so still have to copy the phrase to the main sequencer if it needed PRT based editing)
next page →