I have two Launchpads Mini which I am using with my tools (e.g. Step Sequencer and Live Dive, see signature). The tools support multiple Launchpads which is working fine in Renoise 3.01 and API 4. When trying to upgrade the tools to Renoise 3.1 and Renoise API 5 the Launchpads do not behave correctly anymore. Selecting a button on one of the Launchpads either does not lit a light or does not send a midi message at all to Renoise.

It seems that the midi device names of both Launchpads are the same; The first Launchpad has the name “Launchpad Mini” and the second Launchpad also.

In the tools I am distinguishing the midi devices by their name, so I know which device sent a message. And also I am using the device name to determine sending a message to a specified device.

The described behaviour above break my tools when using more than one Launchpad unfortunately.

Please have a look at the pictures, they show the names of the two Launchpads in the Preferences/Midi/InputDevices menue, and also the printed out device names in the lua console. 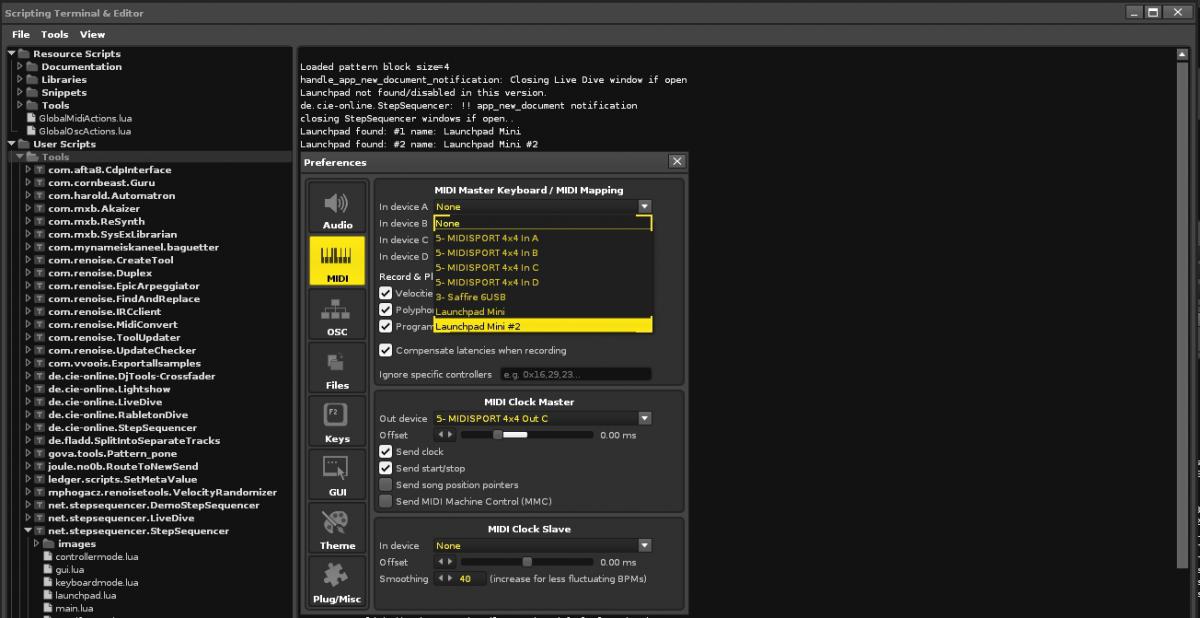 Is there any other way to create an input/output midi device as with the device name? (Maybe with an unique id etc.)
Or is it possible to change a device name for a midi device?

And they turn up just fine in Renoise as separately named devices.

Also, I used to have two Launchpads, but I gave one away. So, not able to test with actual hardware.

I think we need taktik to have a look at this

Question : do the Launchpads carry the same name outside of Renoise? (IOW, is the “#2” suffix added by Renoise and not by the OS or device driver?)

Is there any other way to create an input/output midi device as with the device name? (Maybe with an unique id etc.)

Or is it possible to change a device name for a midi device?

Hello Cie. We internally do give MIDI devices unique names, in case that the OS or drivers don’t care about this, but this somehow got broken for Renoise 3.1. Will fix that…

Ok, thank you for the explanation. Looking forward to the fix