Anyone know of a decent free/cheap VSTi with an OS X version (or an AU) that’ll play SF2 SoundFonts? At the moment I’m using Bismark bs-0 but it’s slightly limited, and the full version seems a bit steep at $50. Failing that, is there a way to load SoundFonts directly into Renoise, or convert them to XRNIs? (A quick search revealed a Windows SF to XRNI convertor, but that’s no help for us Mac users!)

On Mac OSX there is an AU instrumentnamed DLSMusicDevice, installed by default.

Place your .sf2 files in /Library/Audio/Sounds/Banks and they will appear in the DLSMusicDevice’s “Sound Bank” drop-down menu.

This meta device allows you to send a program change (Prg = ON) MIDI event to the AU. This is how can select a different sound bank.

Works for me? What version of OSX are you using? 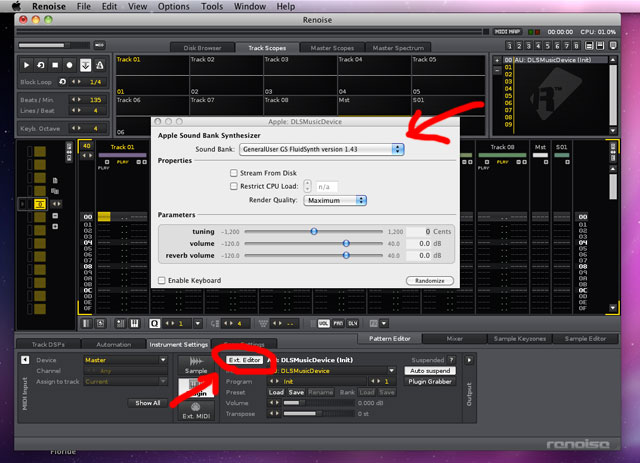 Maybe a permissions issue? Try putting the file in your user dir instead of the global one. E.g.

Snow Leopard; the thing your arrow is pointing at is greyed out and I can’t change it. I’ll try bunging a few random SoundFonts in there and see what happens; it may be the one I’m using is too big/the wrong version/incompatible for some bizarre reason…