I always wondered, why is the frequency tooltip in the spectrum analyzer displaying a note one octave higher than one would expect? 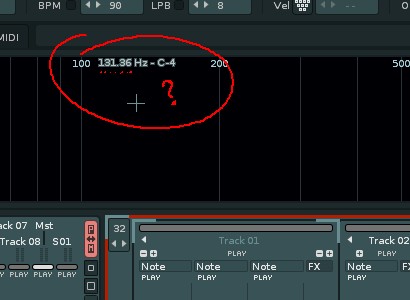 Personally I had not noticed this detail. It seems that octave 0 is ignored and octave 11 is out of place. That is, all notes are shifted an entire octave. If it’s a mistake, it’s a very absurd mistake that probably only involves changing a single number somewhere under the hood.

According to this criterion, there is a full octave displaced.

Different DAWs, different octaves. So there’s really nothing to complain about there.

However, Renoise should be consistent with itself imo.

It’s not even really an issue. It’s just that it has been like this forever and it doesn’t match with the note’s names in the editor so I’ve always wondered whether this was intentional or just an oversight

I wish it would display cents

@taktik, could you explain why this is so? Observing the scheme used by Renoise of 10 octaves, beginning with octave 0 and ending with octave 9, it seems totally out of place, not consistent, that the spectrum shows a whole octave displaced, with the following data:

Shouldn’t this start at approximately 10Hz in C-0 and ending in F-10? Thus, the eighth 0 would be represented and would fit with A-4 at 440Hz, which is a clear reference for many musicians.

The octaves are correct because they double the frequency in each note, but they appear to be displaced an entire octave. Why is this way of measuring it useful as it is now? I would say it has no logic.

If there is no consensus here, could you add an option to be able to shift the frequency to adjust it to the octave that the user wants? If this really is a mistake, it should be corrected.

Octave notations aren’t written in stone, but there a more common and less common ones. Renoise (and other trackers) uses the one the using to avoid using negative numbers in the pattern. They’d require one more character in the pattern editor.

This definitely is causing confusion, but using multiple different notations within Renoise would be even more confusing.

Renoise (and other trackers) uses the one the using to avoid using negative numbers in the pattern.

Yes, if the octave range is fine, from 0 to 9 we have 10 octaves and they are all positive notes. But in this thread we are referring to the fact that the frequency shown in the notes in the spectrum is displaced one octave. Here is a screenshot: 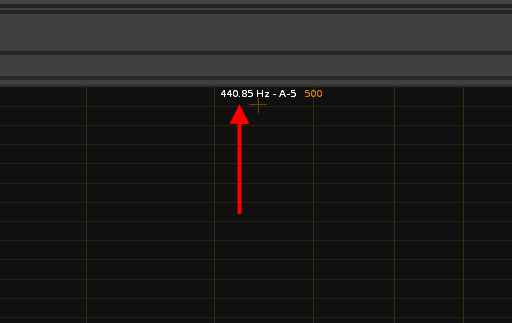 Here it shows that the frequency in Hz is up one octave. Shouldn’t the A-4 note be for 440 Hz?

In other words, lowering the frequency one octave does not imply that the first octave starts at -1. You can keep octaves 0 to 9 and correct the frequencies shown in the Spectrum (above). The correction would be to lower the frequency of all the notes a octave. The tracker would continue to use the octave range from 0 to 9, but the frequency would be one octave below.

When performing the correction for the frequency data for each note, we could use the reference that all musicians have, which we start with A-4 -> 440Hz.

The spectrum doesn’t even show you frequencies for the range of notes of the octave 0, when Renoise uses the octave 0.

According to the “international acoustic index”, C-0 should start with approximately 16Hz. And B-9 would be over 15.804 Hz:

Yes, if the octave range is fine, from 0 to 9 we have 10 octaves and they are all positive notes. But in this thread we are referring to the fact that the frequency shown in the notes in the spectrum is displaced one octave.

In other words: you’ll need to enter a A-5 of a well tuned instrument into the pattern to get a 440 Hz sound. That’s what the tooltip refers to.

I don’t want to waste your time with this. If that criterion is correct, there is nothing more to say.

But, I do not understand this criterion. All the tables that I am consulting on the internet start with C-0 from 16Hz. They pass through A-4 = 440Hz. That is, the range used is from octave 0 to octave 10 (and they have A-4 = 440Hz). I find typical information like this:

or some as this:

Regardless of all this, according to this criterion of Renoise, the spectro cannot show frequencies for the entire octave 0 and part of the octave 1. What? And instead, it shows frequencies for octave 10 and octave 11, which Renoise does not use. Is this reasonable?

Wouldn’t it be more reasonable for the Spectrum to start from C-0 = 16Hz, and so all the notes would be represented?

The C note of octave -1 at what frequency should it start? What systems use octave -1 for Renoise to have an entire octave displaced in the Spectrum?

In fact, I have done a deep search for A-5 440Hz, and “nobody” talks about it. If anyone knows the reason, explain to me the origin of all this, please. Is there any incompatibility with some format of old tracker or something? Is there any other DAW or music program that uses this criterion that returns A-5 = 440Hz?

i think that you just need to ‘think’ one octave lower in order to get corresponding ‘true’ frequency chart, as i understood @taktik’s reply?

is that correct taktik?

I stubmled over some plugins a while ago (I guess it were some midi filter plugins from X42) where it was also different.

I don’t know if it is related, but following my study on this topic I found this:

As I understand it, the range of octaves -1 to 9 has also been used for MIDI, but the frequencies are equal to the range 0 to 10.

C- (-1) = 8’18 Hz
Therefore C-0 would remain 16’36Hz (the double). This is what I am seeing everywhere. But Renoise starts with C-1 = 16 Hz. I still don’t understand why. I always take as a reference that the range to be used is octave 0 to octave 9. The representation of the notes in the spectro should be as representative as possible (that is, not having notes outside the spectro, and not having unused notes within the spectrum as far as possible). That is why I ask why the chosen criteria. The reference of A-4 = 440Hz is very old, long before Renoise exists.

Also the value of the tooltip is greatly diminished in that it does neither display cents nor hz difference to the perfect tuning.