How do I chop a break (amen break for example) without having these small gaps/noises between each chord?

So I’ve been messing around with renoie, I find a break

these nasty gaps in between the hits?

there breaks chopped up similar to mine and don’t run into this problem.

u need to use the exact bpm of the original break then;

…this will not be on Grid; especially with the good old funk - breaks etc.

there is a tool which can help u though; ‘slices to pattern’ in the 2.* version; might be implemented in 3.* already.

search for our fellow renoise - user ‘dblue’ …the famous maker of the Glitch plug in/vst (:

You see the problem is - you have samples that can have a length shorter than the time scheduled for them to play. Mind you, some hits will actually be cut by your next note.

Hope this gives you inspirations how to deal with the problem

edit: 7. also nice - keep a lot of weak hihats with long tail or even idle-with-vinyl-crackle-and-some-reverb-artefacts from your break, and stuff these parts in between where your gaps would be - instant authentic texture.

Certainly useful to get that ‘air’ to stop those hard cuts from being audible. Enjoy!

I realise it’s Ableton, but the same applies for Renoise’s sampler.

There’re several ways to fit your breaks to the tempo:

1st way: when slicing, use zero crossing points (where the sample is exactly crossing the middle line in the waveform editor). Some samples have non-zero points (hard cuts), where the new slice would begin. Then just fade out a small part at the end of the slice, which has a hard cut.

2nd way: most breaks in drum & bass are pitched up. Pitch the whole non-sliced sample up until it sounds to your taste. Then adjust the the tempo of your song until it fits beat-exactly with your breakbeat (this is then your final song tempo). Then you can slice the break up, and it will fit nice to the song tempo. This is also the classical way, which was used to slice up the breaks in 90’s Drum & Bass .

4th way: use an envelope to fade out the slices slightly.

A lot people think, the best way is to slice up a break at every single hit. In some cases this works fine. But in some other cases this doesn’t work good with pitched up loops and some lower bpm, because the pitched slices don’t fit the song’s tempo. Because the uncutted loop would run faster as the used bpm and the slices are shorter in time than the sequencers beat length. Then it causes exacly what you described with the gaps. In 90’s drum & bass the breaks were mostly sliced into individual smaller loops, which contained more than one single hit. Good examples are the Think break and Amen. They mostly were sliced up into smaller loops instead every single hit. E.g. the first slice contains the first kick and the following hihat. The second slice contains the first snare together with the following ghost snare rolls. The third slice contains the next following ghost snares, etc.

And also sometimes, even if a break fits the song tempo, it can cause these gaps. Because almost every breakbeat was played on drums by a real human. And human playing isn’t as accuracy than a precisely timed DAW sequencer. So it can cause such gaps on some slices, if you then put them exactly in time into your sequencer, because they then will end before the the next slice begins. But in this case you can play around with the delay column in Renoise with these slices to try to solve this, to recreate that feeling of human playing. Sometimes this even can sound better if not all slices are placed exactly in time, because this can give your programmed break a special groove like it’s played by a real human. 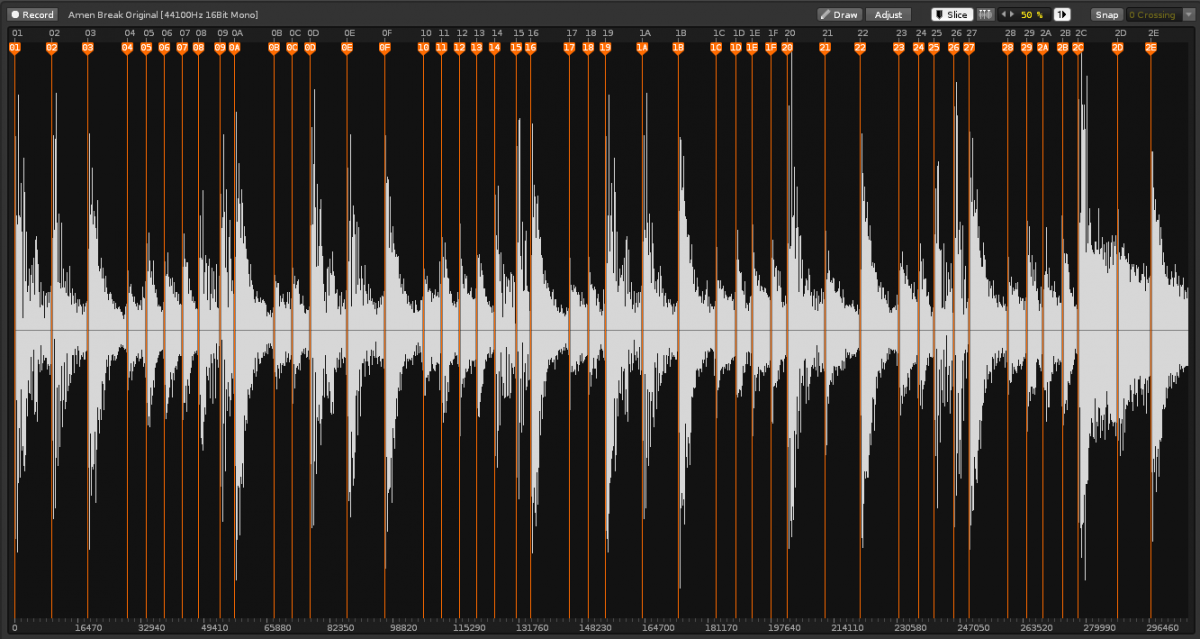 This is the Amen break, sliced up into its individual single hits. 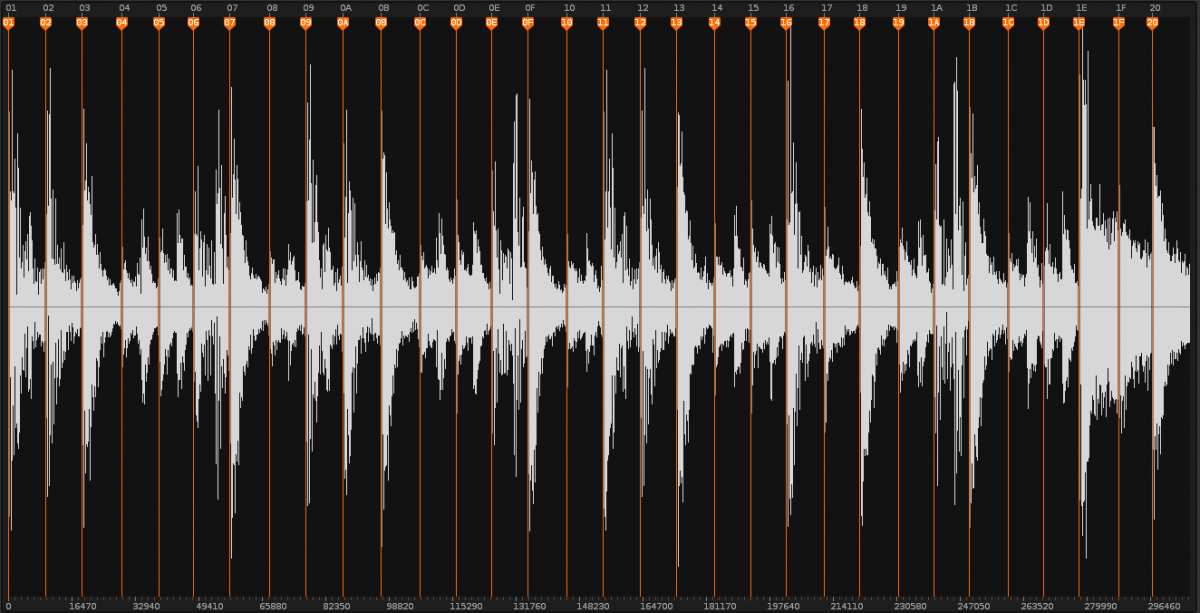 This is the Amen break, sliced into its various elements (kicks, snares, ghost snare rolls, single hihats). This was one of the common ways, slicing up the Amen in lots of the 90’s drum & bass tracks.

Sometimes it’s also good to slice into smaller loops and then varying these in the sequencer. This was also a common way in 90’s drum & bass.

Just fiddle around with different slicing methods, which fits best for your used break.