So the TX Chip guys have recently convinced me to start playing with handheld trackers such as LSDJ.

I’m already working on a couple of Game Boy units, but after looking at LittleGPTracker I’m really excited to find a good device that can run it, such as the Dingoo. 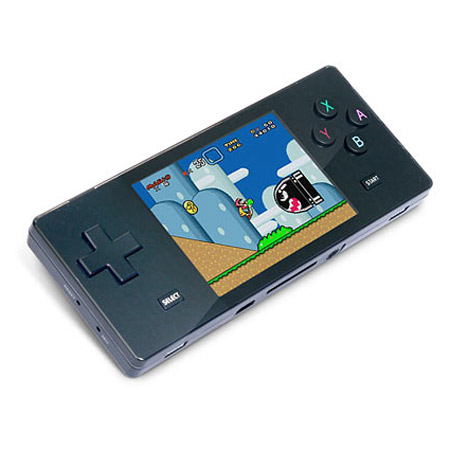 I know a number of you guys have some familiarity with these sorts of things, so share your experience and recommendations for hardware, software, etc.

pspseq on the psp. not a tracker but close.

true trackers for handhelds, i think lsdj and nitro tracker for ds are on top.

Nitrotracker for the Nintendo DS. It’s intuitive and very easy. The combo of stylus touch and the buttons to move through lines is fun and simple but you can work really fast. You can record your notes in real-time playing on the keyboard, which comes in handy for doing just about everything. It’s missing the effects commands of FT2, but it saves as XM and you can load your file to Renoise and work from there. My only problem with it was the developer quit right after working on an update with effect commands and other things and then not releasing it, then making the program open-source after a year of it being dead. It was so close to being the best portable tracker, in my opinion.

I’ve been able to make some fun minimal-type music on it using tiny samples (it only has the 4MB of RAM in the DS for samples) and have used it to make music on the bus or in the park or at night when the power goes out, etc. It’s really good for starting a beat and then loading the XM to Renoise to finish, though I’ve mostly made full songs on it. Due to the way it makes you work and the hands-on approach, it has been a favorite of mine and the reason I use my DS still. It puts me in a different frame of mind when making music than I get when using my notebook. I tend to make “small” music than big tracks and since I can’t use any FX it makes me think of different ways for change. At 4MB RAM, 12 bit stereo sound and a 67mhz CPU, it’s like using an Amiga or a very old computer. I tend to only use about 1/4th of the RAM when I make tracks.

Here are some tracks I’ve done with it. The first two I only used some compression in the wav editor to bring up the volume.

Micro House using tom drums edited in the program for bass and a vibraphone for the “synth.”

Using an old tracker-style swing trick, here are some patterns from a same track I was working on. I exported the XM into Renoise and added only some DSP FX. I couldn’t decide which patterns to continue working on in the DS so I quit

Interesting. I actually have a DS Lite with both slot 1 and 2 solutions, and I’ve had NitroTracker on there for years. Rarely did more than fiddle though. Guess I should whip it out again.

So I pulled out my DS. The thing about NitroTracker is that it’s so centered on using the touch screen and doesn’t have anything in the way of button combinations, which is crazy counterintuitive for a tracker to me.

[details=“Click to view contents”] Keyboard keys and buttons are all binary (on/off) inputs with haptic feedback.
A touch screen requires you to look where you’re pressing and only gives visual feedback rather than tactile.
In my opinion, touch screens will never be able to compete with the muscle memory involved in using a collection of buttons in a consistent configuration.
Ditto goes for mice. I’m sure I’ve ranted about that here and there though.

And I’ll preempt the SunVox responses to say that I love SunVox, but I don’t think I could really use it seriously as a tool without a keyboard.

PS: I don’t know why the spoiler tag does weird things with lines and spacing here. [/details]

Resurrecting this ancient thread to ask you guys if there’s been anything new or interesting you guys have run across lately on this front.

I’ve used Nanoloop for iOS and enjoyed it. You can pretty easily transfix yourself with your own loops.

I’d be interested in hearing from somebody who has a process where they use one of these scaled down apps on mobile and imports it into the PC. Any way to get nanoloop project files into Renoise?

Have you overlooked Sunvox? Runs on Android, iOS, Windows, Mac, Linux, and more. And non-mobile versions are free. Easy to transfer your song from your phone to computer and back again. Bonus points if you just use a cloud service to sync your projects.