How are you using Renoise?

I’ve been experimenting a lot lately using song mode with the MNM and MD, running the sequencers at different speeds using tempo multipliers, and chopping up patterns with song mode to create fills and variations. I love the results, but it can be tedious work, as pattern changes don’t always line up and I often have to start playback from the beginning to ensure I’ve got the timing down.

Thus, I’ve been thinking a lot more about using Renoise, after being an Ableton user for years. I’ve never really used trackers, but find Song Mode inspiring and easy to use, and am hoping that using a full tracker might help with editing and arranging. Does anyone use both? If so, do you sequence from Renoise, or just chop the audio up in it? I’d hate to lose the Elektron sequencing, but maybe there are advantages to sequencing in Renoise?

Renoise is a fantastic sample manipulator. I’m sure you’d find it more than adequate for editing and arranging your Elektron jams. However, it’s not so great for recording directly in, you’d be better off capturing the audio in Ableton or something else and then loading the files in Renoise.

Not really sure about sending midi sequences from Renoise to external hardware, I’ve never tried it myself. Basic note info is fine but fine tuning CC messages is a pain in the butt, even using the midi automation with envelopes is just not fun, but it can be done. I’ve always read that the Elektron sequencers are a big part of their appeal, so you might want to stick with them anyway.

Give the demo a try and play around with the sample manipulation capabilities, that’s where Renoise really shines. You also mention that you’ve never really used trackers, so there will be a learning curve there as well, but there are some nice tutorials to get the basics down that you can find on Youtube and elsewhere.

How am I using Renoise? Maybe not well at the moment…(live stream)

I’ve just begun using Renoise, but have been making sequenced music since '95. Wish I took this up sooner, as I’ve been wondering how to get the sound/style I want (a Max/MSP minimalist granular glitch beats / odd tempo / pretty melodies), and Renoise handles that beautifully, without me having to know how to code. It does handle samples in a way that I just can’t believe, and the contributions that people are making for devices that can do these VERY specific actions are just amazing. Coming from Reason (and other DAWs), this one makes sense for the style(s) I’d like to hone in on. No, I probably won’t make more natural styles of music in Renoise, but for what I want and love to make, wowee man!

Losing the piano roll method hasn’t been overly terrible, and it’s all slowly starting to make sense to me. On top of that, the interface of Renoise. I LOVE it. Also, it’s running on my Late 2012 Mac Mini so well in Mojave. Like, if I wanted to do this in Reason right now, it wouldn’t actually work - and my setup is very minimalist. So, very happy to get the sounds/style I want in a beautiful. No crashes, no issues unless I want to fill out a sampler as a full-scale beautiful synth (multi-sampled). I just don’t need that kind of clarity.

I’ve been trying to emulate this DAW that I have that doesn’t seem to be getting any updates and runs less efficiently than Renoise. It’s called 2020 the Semi Modular Beat Machine. A beautiful minimalist DAW. 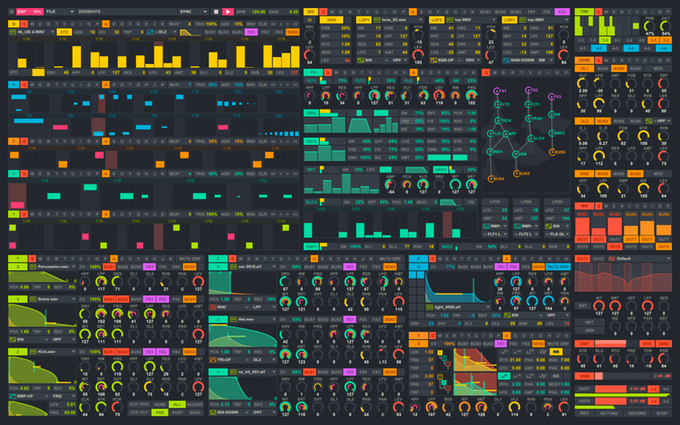 I believe I can create most, if not all, of the functions in Renoise without the hassle of coding it myself. I mean, right down to the granular, glitchy goodness. With Michael Norris’ Spectral/Granular Audio Units and the Repeater. I’ve got it pretty much nailed. The fact that I can use free and stable Audio Units for my music system and use them as a native effect. Too much! This tracker is top notch. I can even make it look similar to 2020 if I want.

And the sound! I can master right in the box to emulate the style that I want? Damn! I let that tracker interface scare me away, but why? Amazing DAW.

Enough yakkin’ back to creating.

I guess you could trigger elektron patterns from Renoise, then you wouldn’t lose the P-Locks.
Or even better, set up patterns with lots of fun P-Lock sequences on the elektrons and then fire notes and pattern changes into them with Renoise. If I still had my Rytm i’d give that a shot right now.
Venetian Snares has been using Renoise together with the Machinedrum pretty much since it came out, so it seems to be a nice combo.

I recently got back into Renoise for its pattern editor. I’ve always wanted to make tracks like the more dnb-type stuff off of Aphex Twin’s Drukqs but never got close with traditional piano roll sequencers, so after a few years i gave up on sequencing altogether and went full generative/ambient to focus on sound design. Now I feel like my ability to compose has atrophied, and Renoise basically forces you to write rather than just setting up a loop and twiddling knobs. I still have a hard time letting go of my habits but it’s slowly improving.

I think a big factor in the decision was figuring out that almost all the music that inspires me was made on trackers in some way, be it 90s jungle/dnb or frantic IDM. Most of the glitchy drum edits and effects can be written right into the pattern without any plugins as long as you use the sampler+pattern fx. Much more precise than using vst’s or Abletons automation lanes for that.

I am coming from Ableton, Logic, Cakewalk. Most of it was to complex, or was not able to see my construction on one screen or even two.

A step sequencer hardware was either to expensive or to much limits. I am using Renoise as sequencer for my hardware synthesizer like Virus TI 2, System 1, JV 1080, S 50 etc…

I use a normal screen and an ELO touchscreen to start the tracks etc… I tried Lauflicht, but I have some problems. I recognized the scale mode…

Generally I comes close to what I am looking for, so I let Renoise do the sequences and I can play with my hardware synthesizer filters, effect etc… I like it, because I see my whole world on one screen / maybe 2…

I not have to click. I do it like live playing and I am not recording, so it really works for live playing.

There are already many functions, which makes it easy to start with a template, all the machines with channels are in…

If I can solve the problem with Lauflicht it will be perfect for me.

I’m also an Ableton user, finally caved and bought Renoise because the interface and workflow just clicks with me and I’ve realised I have a raging fiery hatred for piano rolls.