How Do You Write Lead Lines For Midi Instruments

Last night I tried Renoise for the first time. Great stuff. Lets me write music with my favourite VST instruments, in tracker style. Just sort of like what I’ve always wanted. For example, writing a groovy synth bass line with tightly controlled legato/staccato
note lengths is about as easy and productive as can be.

But. How does one write melody lead lines with VST instruments like in trackers and sample sounds? I can’t figure that out, even with Google and reading the help manual. In addition to writing note timing, velocity and length information, I need to be able to specify pitch curves like you’re supposed to in trackers. And no, I really don’t mean automation curve hell or running scripts or stuff like that, because that would be like throwing away the whole point of using a tracker. For gliding into a note, portamento MIDI CC could be useful or just using a gliding legato sound patch. But… what command does a pitch bend up or down, with speed/amount…? To be honest, I assumed, and I thought it would be self evident that there would be some kind of a mapping from the most basic tracker commands 01xx and 02xx etc. into MIDI controllers. Yes? No?

Btw, What’s Up With The Topic Line.

But everything should be controllable with the “Instrument Automation and Instrument Midi Control” Meta Devices.
The VSTi you are using has to support the function you want to change in the Meta Devices i believe.

I think everything you look for should be in the “Meta Devices” and “Midi-Mapping” ?

It’s up to a VST whether it response to Pitch Bend or not. Nothing Renoise can do about it! And impossible to do most of the Sample Commands to VSTs!

Also as you said you read the manual I assume you took note of this sentence:
“Most of the effects listed here only apply to sample-based instruments and will have no effect on MIDI or plugin instruments, as Renoise does not have full control over properties like playback directions, pitch glides etc. The arpeggio, retrigger and delay commands, however, will work with MIDI and plugin instruments.”

Thanks. With a combination of “Hydra” and “Instr. MIDI Control”, I’m able to, from a pattern effect command (say. 10FF), set Hydra’s input parameter, which in turn generates a pitch bend MIDI message via Instrument MIDI Control. But I can get the same result using the C1 command in the panning column, and that’s not what I want. What I want is a way to give a pattern command “on every tick of this row, increase the pitch bend value by the parameter xxyy, and send out a new pitch bend MIDI message”. Of course, specifying a new note without an accompanying “bend” command would need to generate a reset pitch bend command without having to explicitly send a reset.

This whole thing seems quite messy and convoluted. Good old tracker patterns are an effective and quick way to express melodies. How does everybody do their lead melody lines? Or do they? Is it just this loops-cut-to-pieces electronic drum mishmash fashion garbage that everybody’s making.

Maybe, if there was a way to do “non-looping arpeggios”, I could write legato notes faster than one note per row, that would be an alternative way to express melody lines. But it still wouldn’t be the same.

Basically, anything that involves using the mouse or having to bounce around typing multiple commands and parameters in several columns, just to express one simple melody bend… ouch.

It’s up to a VST whether it response to Pitch Bend or not. Nothing Renoise can do about it! And impossible to do most of the Sample Commands to VSTs!

Also as you said you read the manual I assume you took note of this sentence:
“Most of the effects listed here only apply to sample-based instruments and will have no effect on MIDI or plugin instruments, as Renoise does not have full control over properties like playback directions, pitch glides etc. The arpeggio, retrigger and delay commands, however, will work with MIDI and plugin instruments.”

I did read those (and it seemed unbeliveable), and that’s why I asked, how DOES everyone do it. Feel free to describe how you write melody lines that have lots of fluid pitch modulations.

From the top of my head I can think of many ways to generate pitch bend MIDI messages from 1xx and 2xx commands, so I assumed there must be an even better way that everybody’s using. No?

I’ve asked for something similar, it would be very intuitive, but the amount of pitchbend (or something like that) is not a standard in the VSTi SDK so I think it’s extremely hard to make a solid solution.
So for now the best I think you can do, is to find a VSTi that’s able to glide when it’s in a monophonic mode, maybe take a look at Zebra2.

I’ve asked for something similar, it would be very intuitive, but the amount of pitchbend (or something like that) is not a standard in the VSTi SDK so I think it’s extremely hard to make a solid solution.
So for now the best I think you can do, is to find a VSTi that’s able to glide when it’s in a monophonic mode, maybe take a look at Zebra2.

Thanks for answering. Maybe I made a mistake by talking about VST instruments, because this is really just about MIDI in general. The same thing is needed for outboard MIDI devices.

I don’t see any kind of problem with not having a standard for pitch bend ranges, except that sometimes it would need to be explained to people who don’t understand what MIDI is. Now you need to explain why 1xx and 2xx don’t do anything at all. There’s no standard for what MIDI notes “mean” either, but still the manual says that you can do arpeggio for MIDI devices, though it doesn’t seem to work in practice.

But I’m still a bit confused. How do people do synth leads with MIDI instruments in practice? 8 or 16 rows per beat and mono/legato lead sounds? Write automation curves with the mouse?

AFAIK, automation isn’t tied to notes in patterns, and it can’t be entered from the keyboard at the same time as notes.

MIDI Notes are quite strictly defined, what you on about?!

I have already pointed you at Pitch Bend, which is fully supported in Renoise, and what MIDI devices use for this (assuming they themselves support it.)

There is no reason Sample specific commands should work with MIDI and VST when they have their own methods!

I am 99% sure that you either didn’t read what I wrote, or didn’t understand it.

Let me rephrase. How do you create a pitch bend curve so that

for more fluidity you probably need to increase the resolution of your Renoise project, meaning expanding the patterns and adjust the tempo/bpm/lbp accordingly. I don’t work with midi myself, and when I want to have vsti leadlines going all bend crazy, I export the instrument to .wavs, and 2XX, 1XX the hell out of it.

hope this helps, else i dont get the question, at all ;]

not just one single pitch bend message per row

If you want smoother results then you really only have 2 sensible choices here:

Increase your Lines Per Beat setting (perhaps double or quadruple it) and physically insert more commands into your pattern, to help break the automation down into smaller discrete steps that will produce a smoother overall result.

A third alternative is to use a custom LFO envelope and trigger this when you need it, but this is a bit more limited because you can only have one curve per LFO device. It would be possible to have multiple LFOs with a variety of different pitch bend curves and switch between them in your song (I’ve done it before), but it’s not the most intuitive method.

In my opinion you should just bite the bullet and use automation envelopes. Producing smoother results is exactly what they’re good for. Take advantage of them

The problem with Custom LFO on One Shot mode. When it reaches the end of the cycle it freezes at the last point and you can not physically adjust that parameter any other way except by turning off the LFO device.

You can work around this by routing the LFO into either a Hydra or an XY Device as both of these leave the device free to other control if their input is not being changed.

Thanks everybody. So it is unfortunately exactly the way I was afraid it was.

With the documentation and trial/error I was already able to figure out all the different solutions you presented, but I didn’t believe that was all, i.e. that the feature I’m looking for just does not exist.

I’ve got Ableton Live and Cubase, so I have lots of ways to do stuff, but I was just hoping to bring into MIDI land some of the aspects of good old tracker music making that have been beneficial for my personality. Live, Cubase and Renoise each have their strengths and weaknesses, and they’re suitable for different situations and ways of working. I hope that some day the Renoise developers add a way to generate per-tick pitch bend messages curves from pattern data, adding to Renoise’s strengths and set of possibilities.

Just in case someone is interested why I’m not happy with these suggestions, I’ll list them here

There’s one more thing that nobody suggested yet. I don’t know if it’s possible, but here goes:

That was just an idea, and I haven’t tried it yet. Is Renoise able to route MIDI between VST plugins? I have to check this.

You can control the *Instr. MIDI Control device with the effects columns in the Pattern Editor, not just envelopes. This is understood, as shown by Phuture, right?

Here’s another example. I turn on the LFO device at line 07 with a modulation of ~4LBP, then at line 09 I change the modulation to ~8LPB. Then turn it back off at line 0C.

To get the number I just right click on the slider (With Pattern Automation Recording Mode turned off.) No envelopes required. 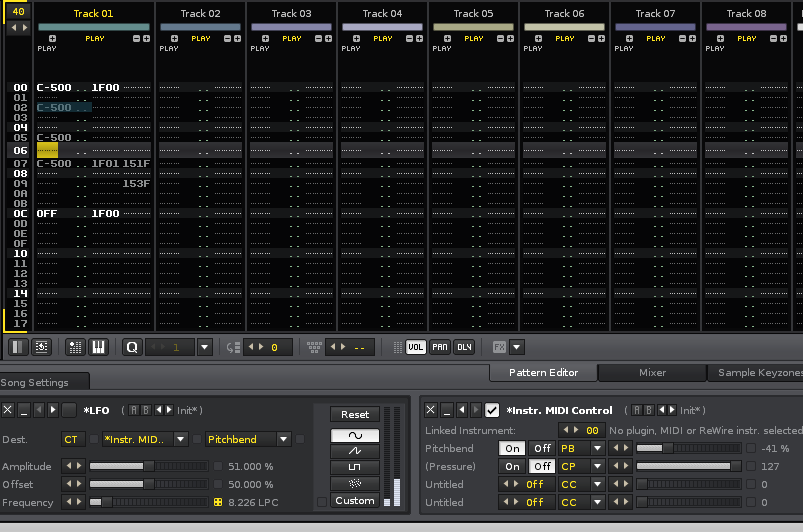 Maybe not what you are asking for. But it doesn’t seem that big a deal to do it this way to me?

Right, but it’s not 1992 anymore. Renoise has been around for 10 years now. Many of it’s users, like me, are pushing 40. We’re not newbs to trackers. This is how the software evolved from community input, many a hardcore tracker from the days of yester year. Obviously your ideas are good, and bring a fresh perspective to solving MIDI workflows, but the current way of doing it ain’t that bad?

im wondering tho, why is there no modwheel parameter in the midi control device? is there a way?