How to listen songs in real 5.1 multichannel sound with Renoise and convert en WAV 5.1

Initial note: This article has been updated and corrected!

This is a short User Guide for listen tracks in true multi-channel 5.1 format, “just using Renoise”. To render a 5.1 multichannel wav file, you will need to use other software.

I will take the reference with Windows 10/11, but it has its equivalents for other Operating Systems and their versions compatible with Renoise (Linux or MAC). I will also take the 5.1 multichannel distribution as a reference, but it can be 2.1, 5.0, 4.0, 7.1, etc., depending on the characteristics of the sound card.

The process goes through knowing the requirements, producing a song with the Renoise, configuration for 5.1 distribution and later rendering the parts with Renoise to achieve a WAV file in 5.1 using other software.

Generally, Renoise composers render songs in stereo, that is, in 2 channels front right (FR) and front left (FL), or 2.0 multichannel sound (two channels without subwoofer division). When rendering a song, Renoise will always render a wav file in 2 channels. With some steps and external software, it is possible to build a 5.1 channel WAV file. Let’s see how!

What if the composer wants to render a song in true 5.1 multichannel sound? Is it possible just using Renoise? You will be able to hear the result only with Renoise, but you will need external software to be able to render in 5.1.

2. Requirements to listen the song with real 5.1 multichannel sound.

Basically you will only need two things:

There are a multitude of sound cards, both integrated into the motherboard, as well as dedicated PCIe or USB. For example, I use a PCIe Sound Blaster ZxR sound card, which is ASIO 5.1 compliant and offers very low latency. You can look for a similar sound card.

The important thing is that it is ASIO compliant. Focusing on my sound card, its ASIO support allows up to 6 channels to be used:

Pay attention! When Renoise is properly set to ASIO, it will detect the following for routing tracks (remember this for later):

If you have a different sound card, the names (like Front L / R) may vary.

You already have the sound card drivers installed and you also have the Renoise 3.3.2 or higher version software installed within Windows 10/11. 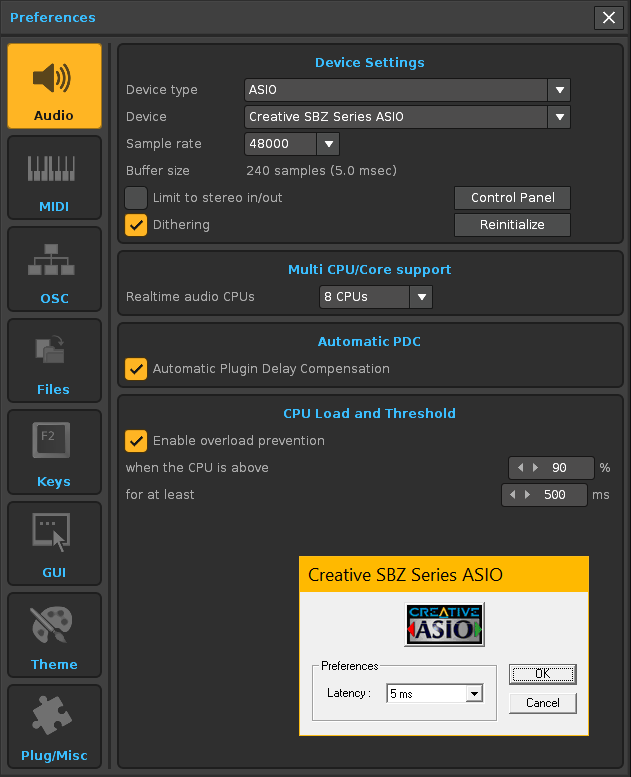 If you have doubts about the terms “sample rate”, “latency”, “buffer size”, etc. please refer to the Renoise User Manual or or check out the Renoise forums.

After understanding and setting up all these settings in Renoise, you can now route your tracks to each channel.

Renoise has 4 types of track:

So you can force any track to be routed directly to the sound card, ignoring the Master Track, with all that that entails.

Let’s see how to distribute 6 Note Tracks, each one to a different channel to obtain 5.1 multi-channel sound, with the following distribution:

This distribution redirects the sound signal completely separated to 100% to each corresponding channel.

If your song project has 32 note tracks in total, you can redirect all these 32 tracks independently to the desired channels.

5. Working with the panning of the tracks and volume control

Now if you want to change the panning to partially redistribute the sound on 2 channels, you are really playing with three 2-channel systems:

So you can play with system 1 and system 2 to redirect the sounds. And even do it between the two systems and center channel by working with some automation tricks with several tracks to simulate those “crossover pannings”… This is magnificent!

In addition, you can use the group/send tracks as tracks routed to the 3 channel systems of the sound card. To redistribute sound, you must think of each “system” as a group of two channels (left and right).

Once you’ve finished the song and saved the project, you can render it in multichannel WAV 5.1 format.

Renoise’s Song Render feature only outputs a 2ch or 2.0 WAV file. This is apparently due to the redirection of all tracks to two channels in the rendering process. Actually, this is a sad limitation of Renoise, which forces you to use other software to build WAVs with more than 2 channels of audio.

The process is indirect. It involves rendering separately the tracks that we have separated from all the channels.

Later, load all these tracks in other audio software that accepts audio tracks to save the final result in a WAV 5.1 file, such as Audacity (Free), Sony Vegas Pro or Adobe Audition, Nero WaveEditor (Free), among many others.

In summary. If you want to listen to your songs in 5.1 multichannel audio, you only need Renoise and an ASIO compatible sound card for Windows 10/11 (or its equivalent for other O.S.).

If you want to save the result in a WAV file in 5.1 multichannel audio format, you will have to use other software to join the result of the tracks.

With Audacity. Convert to 5.1 channels

For example, Audacity is a free software and multilanguage (Download Audacity here): 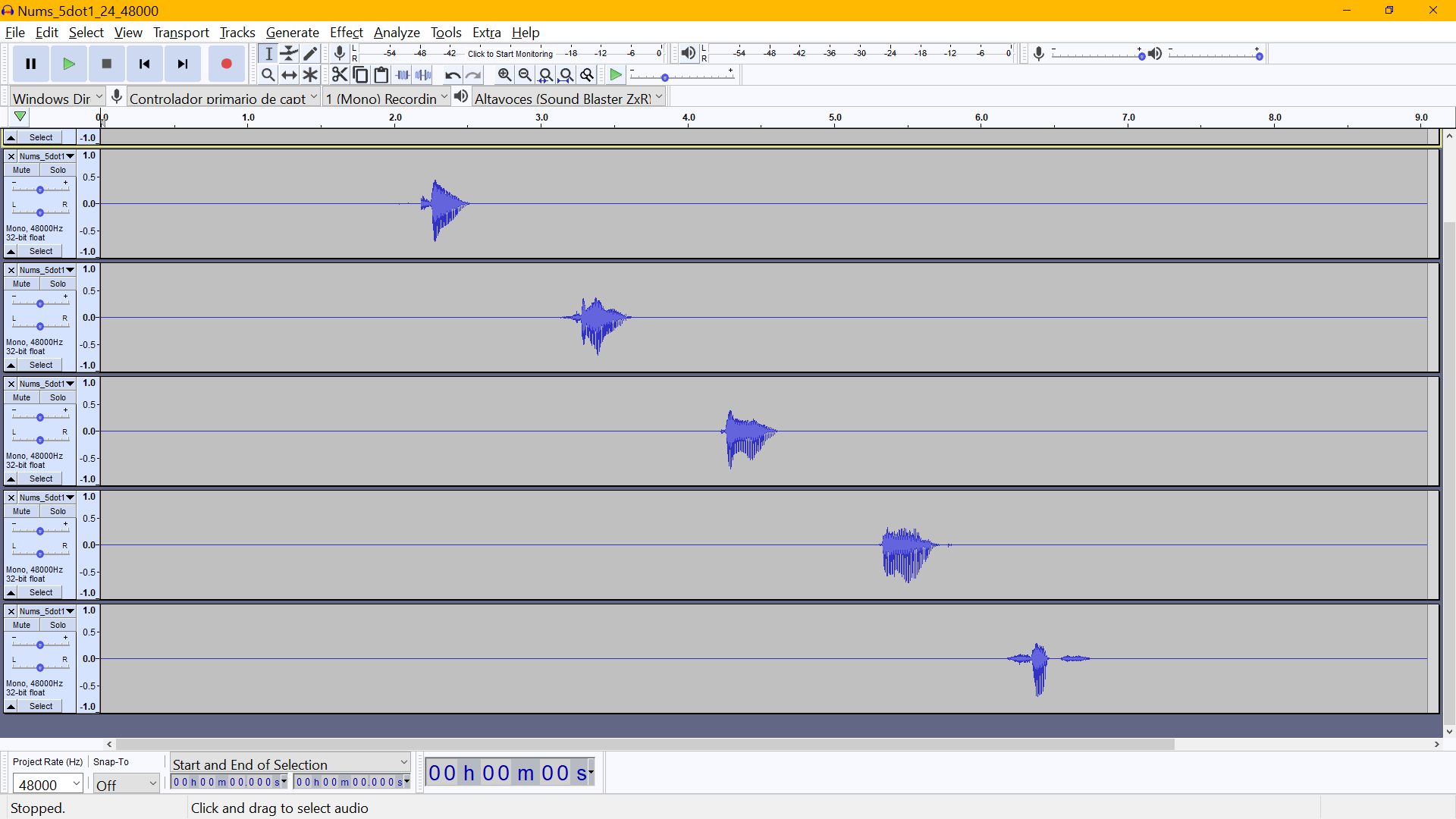 Voilà, that’s it. After all this process you will get your WAV file in real multichannel 5.1 audio.

Each audio software will have its peculiarities. Consult the user manual of each program for details on how to convert to WAV 5.1.

Remember this is a guide for 5.1 multichannel. It has its equivalents for another number of channels.

Interesting! I wonder if there is some low-level magic in Windows+ASIO that allows you to render directly to a 5.1 WAV file. When I attempt this on Mac, I can route audio correctly to my multi-channel audio interface, but rendering the song to disk results in a down-mixed stereo file. All 6 audio channels have been captured, but as a 2-channel stereo file.

Note that the Mac version of Renoise does not offer a “Device type” selection in the audio settings. I wonder if I would have better luck connecting to a surround receiver via HDMI and setting that as the Mac’s system audio destination?

I have been using Send tracks to collect the 3 different stereo pairs (as described here), essentially doing the same routing you describe. However, to get a 5.1 WAV file, I enable the “Save each track into a separate file” option, then join the 3 stereo tracks into a 6-channel WAV file in another DAW.

Interesting! I wonder if there is some low-level magic in Windows+ASIO that allows you to render directly to a 5.1 WAV file.

Indeed, there is no magic. Renoise will always render the song in WAV with 2 stereo channels, unfortunately, regardless of OS and sound card. I’m sorry if there was any initial confusion in writing this article!

To obtain a WAV file with 5.1 multichannel audio, it is necessary to use external software. The user guide intends to explain all the way to the end, obtaining this WAV 5.1 file with additional software, the same procedure as you mentioned with MAC.

Ah, drat! I was so excited by the possibility of removing the extra steps from my workflow that I overlooked that nuance from your guide.

Your updates make this much more clear. Thank you for posting this!