I have tricked Renoise

Hello, Dear friends
A lot of Renoise users, or at least me, struggled for a long time of an issue that we can not send signals from sidechainers or followers to previous channels.
I have solved that issue by making the previous channel a Next one.
The steps:
1. Send the whole signal of your (Previous) current channel to an empty Send channel *with a Muted Source.
2. Apply the effects that you want to automate or manipulate only to the Send output.
3. Now from any (Previous) or (Next) channel you can send a sidechain signal or even a signal follower to the Send output, because it became the last one on the list (The most next one) 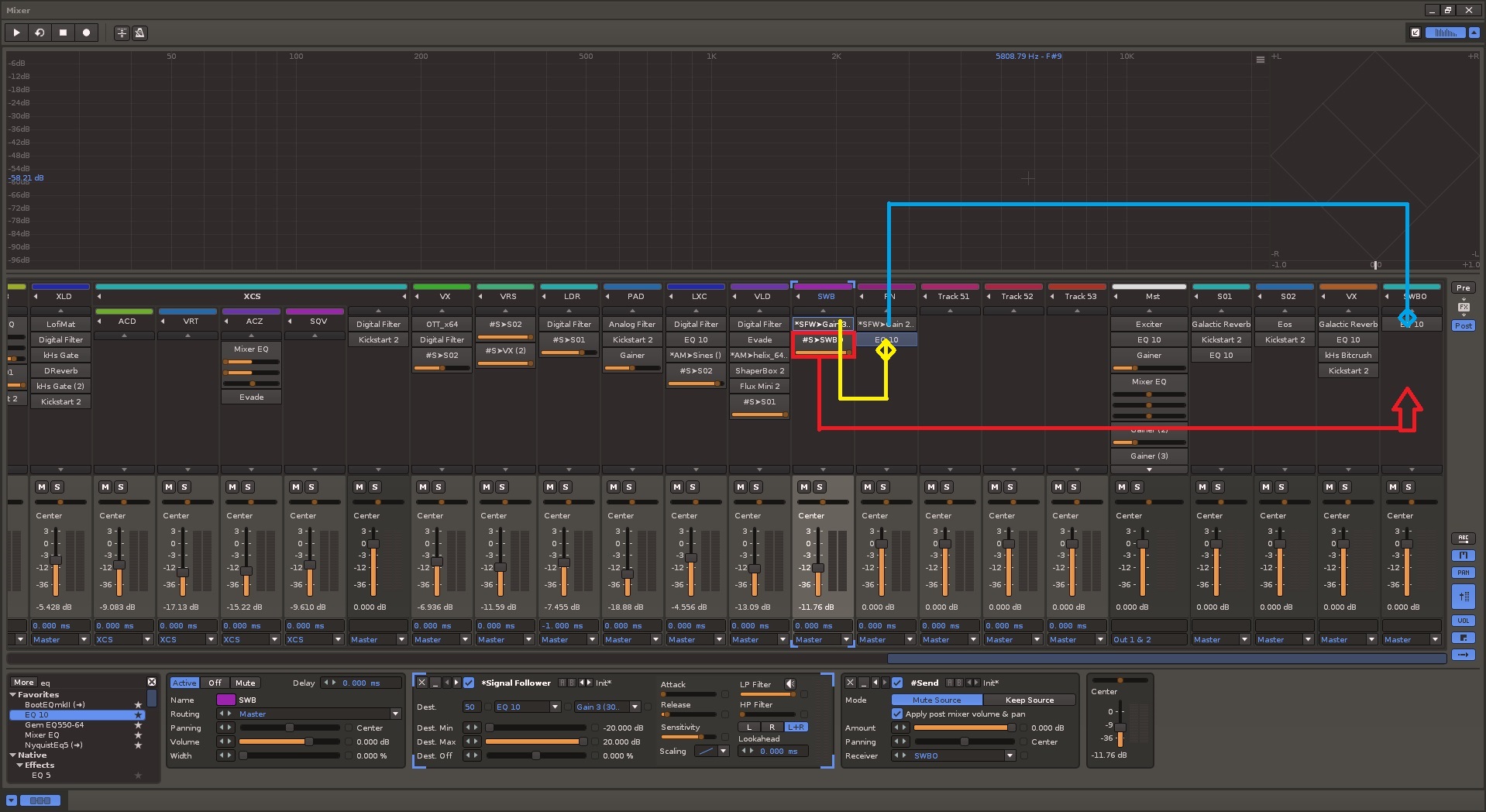 exp:
The red line is a signal out to an empty send channel using SEND
The blue line is the sent signal from a Next channel to a Previous one (That can not be applied by standard) going directly to the send output of the Previous channel (triggering the gain of EQ).
The yellow line is a standard signal from signal follower (Previous) to a Next channel.(triggering the gain of EQ)
By adding or duplicating outputs into SENDS, you can send any signal from sidechaine or signal follower both directions.
Hooray

Yeah, that is how sends can be used, to sum stuff, and then it can be processed together. It still allows no backloops, but it allows the trick you describe. Technically first all the channels are processed, and the signal follower values get read, and then everything is mixed together and the follower automation applied, so there cannot be made any loops.

IDK why the hydra allows it while other devices don’t.

a mythical beast should have some special properties

this is a great trick (hydra fb), thank you. currently having fun with broken modulations

OP’s trick is nice, too… The power of sends

The description is extremely confusing… Previous, next, what? sent signal directly to the send output of previous, what? EQ10 now has a gain control??

Can you believe it? Yes. Every frequency of EQ10 has its own GAIN CONTROL.

Nice trick, very obvious and logical. I would describe it this way:
Shift your track to the right by sending it to an empty FX track in mode “Mute Source”.

An now comes the question:
Why not shifting the track to the right instead of creating a “clone” by sending the signal to an empty FX track?

Every frequency of EQ10 has its own GAIN CONTROL

Let’s face the truth: Gain control of frequencies is what makes an EQ an EQ.

I don’t understand, but I want to.

That is probably why the signal follower doesn’t allow sending back. IDK why the hydra allows it while other devices don’t.

I think its because Hydra is an aggregator (a collector) and the direction of the signal does not matter.
For the sidechain sends, i think it can be used both directions too. For example, if i want to duck a concrete frequency in a kick sound that located on a Previous channel by a clap or snare that is on Next one.
In my example i used a piano hits (Attacks) to trigger the gain of concrete frequency of my bass, which was located Previously and i could not do that without sending the whole signal to an empty channel to make it next

Shift your track to the right by sending it to an empty FX track in mode “Mute Source”.

Exactly. Some users told me that Renoise wont add this function to avoid feedbacks and signal loops or something. But now after applying this trick i can shift infinity amount of tracks to multiple sends lol

Why not shifting the track to the right instead of creating a “clone” by sending the signal to an empty FX track?

Because i want the both Left And Right channels ( the previous and next) to send signals to each other. But that is impossible in Renoise, due to the limitations of sending signals only to the Next (Right) ones. You can not send signals from right to left, unfortunately.

I think i need to do a screen record or somethin. It looks confusing for some users

Because i want the both Left And Right channels ( the previous and next) to send signals to each other.

Ah, ok, now it makes sense.That’s possible the way you describe it as long as the send device muting the source of the “orginal” track is the last one within the chain.

Indeed ! I was facing this issue for a long time without figuring out how to solve it. I even added a request in Future Renoise Functions thread or something about making an option to send signal both ways (From Left ro Right and vice versa) . Unfortunately, Renoise allows us to send signals only from Left to Right.