I’m kinda new here, I suppose. I mean, I bought a Renoise license like 10 years ago, hoping to start using it, but I found it too hard to make it work with my Reason-based setup back then, and didn’t persist past a pair of songs.

Nowadays, Reason can be used as a VST3, Renoise added VST3 support, and somehow my Renoise license is still valid, so I knew what I had to do: 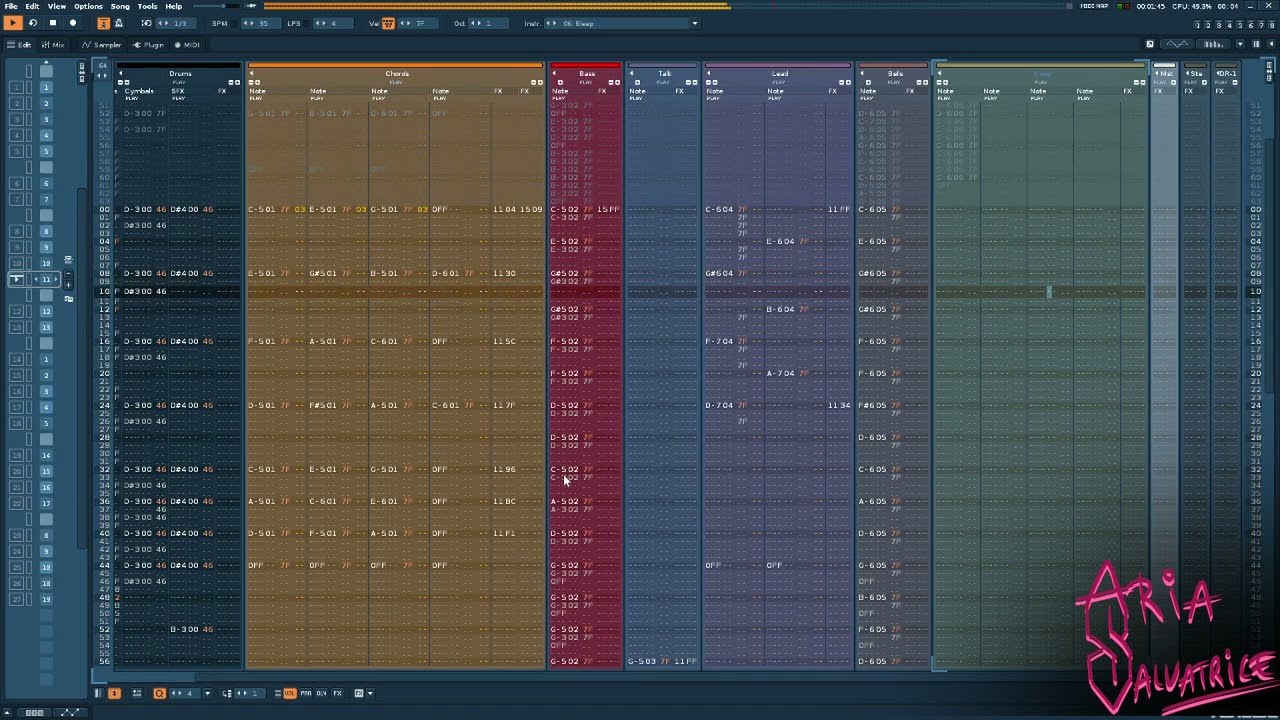 Soundcloud version if you prefer:

So, all sequencing was done with Renoise and the odd Reason player device, while all sounds and effects come from Reason.

It’s probably my 4th song ever finished with a tracker, I’m not super comfortable with the whole “making a song in microsoft excel” thing yet, a few things tripped me up, and I intentionally left in a pair of classic noob mistakes happy accidents, such as the long drone starting around 1:58 being a note off I forgot to send lol.
I tried to use Renoise close to its default settings for now, I want to give it a fair try before I reconfigure things too much.

I tried out a few Renoise tools too, Chord Lord is very neato. I also like how the tracker interface lets me see all harmony at once.

To integrate with Reason, I found that the simplest consistent way would be to use Reason Combinator in every single instance, to program its macro controls, then wire that Combinator to a Renoise Doofer. Otherwise, there’s way too many unsorted parameters to program the one I need. I assume it’s the way most people go about it?

I tried out using Reason player devices, they work pretty well, except I can’t toggle them on the same tick, gotta wait about 3 ticks for it to work reliably, I used the note delay for that. Ah well, musically imperceptible, but annoying.

I found myself using tricks I wouldn’t have bothered with in other DAWs because it’s be too much of a pain. For example at 1:13 I automate bringing down the volume of the reverb and delay send returns to 0 in perfect sync with the notes for a split second, the effect is subtle but interesting.

Reason’s sequencer is a neglected antique breaking at the seams, so I’m desperate for more inspiring options. I dunno if I’ll make many more songs with Renoise, but I definitely want to add it to my frequent roster of music tools now that it has VST3 support. It works particularly well for my style of synth modulation micro-edits. I’ll hear advice if you got any!

Welcome friend.Your track is amazing ,you really know music theory and how to structure a song.Renoise is a beast it may seem like a spaceship but once you get the hang of it you want be able to live without it.Renoises real power is in the effect colums although I myself haven’t really learned how to make the best of it i advice you to make the efford and learn it.

I’m trying to approach Renoise with an open mind to see what it can do to my sound, rather than coerce it to do what other DAWs already do well, so sample mangling is definitely the next thing to try out on my agenda (since external VSTs can’t make use of most of those powerful effects). But I’m generally more into programming synths than using samples, haha. I’ve tried out rendering synths to sample, they sure don’t sound as lively, but it could be interesting to program my favorite synths specifically to use as raw audio waveforms to process in Renoise.