I would have an additional option to record live automaticallyorderly notes in a track (with any MIDI keyboard or other MIDI device, oralphanumerickeyboard)… On a track, every note is automatically written in an orderly column.Each track has 12 columns. Each column automatically assigned to a concrete noteandall octaves, eg: C-0, C-1, C-2… C-9 always in the same column (Column “C”).

The problem is that some notes can overlap(eg C-0 with C-5 or F#3 with F#9). The tracker could write the overlying column note immediately left free. In most cases there would barely overlapping notes.

The following screenshot shows the idea (Intelligent Tracker).When recording live,the result would be similar (ordered notes on each column automatically): 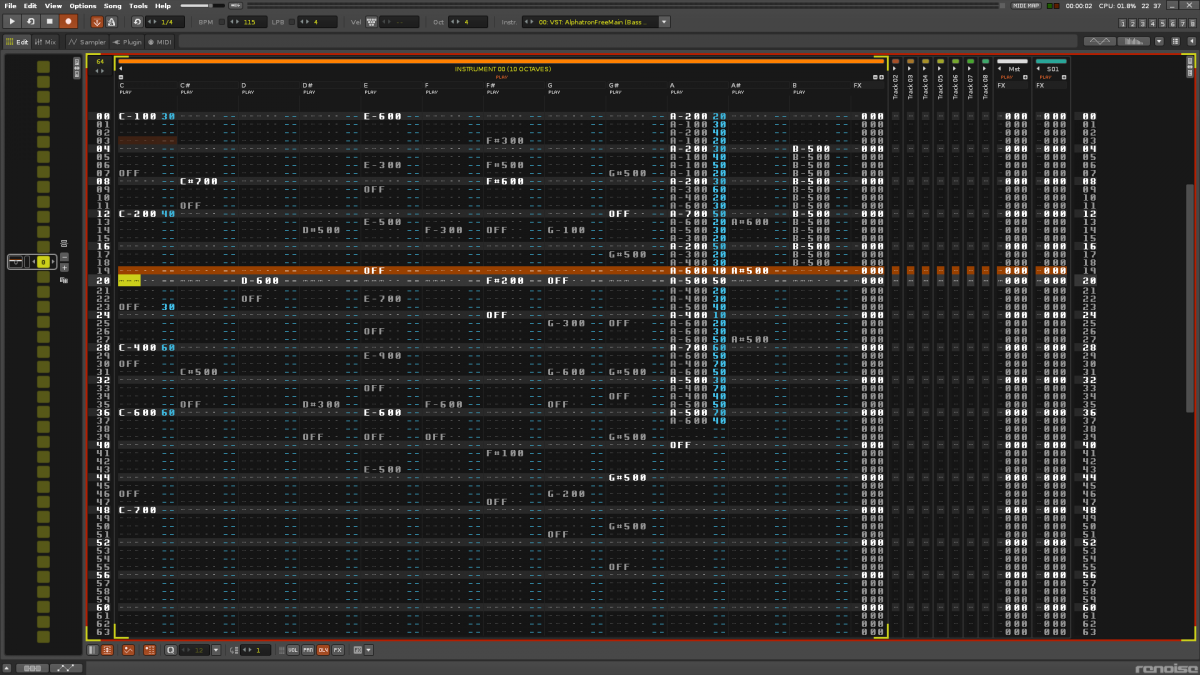 This new feature “Intelligent Tracker” may be activated through a button.

After recording live, it’s easier to read what the composerhas touchedclearly, because it follows the musical scale.

If the composer changes the instrument, the behavior is the same.

Note :This function is one added, does not destroy nothinginRenoise.

Would work great for drums, not so much for chords. But I like it. Let’s call it “Drum Mode” then, though.

I think works well on almost anything!

Contribute ideas for the sake of furthering the project, not because you want to fish for “likes”.

Contribute ideas for the sake of furthering the project, not because you want to fish for “likes”.

Do you ever to joke?This comment comes from afar, from another forum withfladd, a topic we disagree. Here: https://forum.renoise.com/t/renoise-vs-fl-studio/44342(trying to contribute ideas)

Off course Legendary Taunt!If an idea is good, support would not hurt. And what will you think of the idea?You like what you see?What is your opinion on thisidea?Or would you rather ignore?