is there a way for example to load 16 samples of kick drum (different velocity) into sampler, and distribute it accordingly on same key (not all keys) (c1 for example) so each of 16 samples has same range within 0-127?
i’m having hard time dragging every layer individually for one drum at a time…

I have several multisampled drum kits and i would like to create instruments out of them, but dragging one by one into keyzones is really not-so-fast

Of course! In fact, when you know how to do it, you’re going to laugh!
Steps:

You can also do the same to set the velocity of the layers (vertical).

i was aware of this, but now all zones overlap?
my idea was to distribute layers individually on c1 for example, so they don’t overlap…?

Yes, all samples have a layer. All layers are superimposed. Use the overlap to change the behavior when touching. 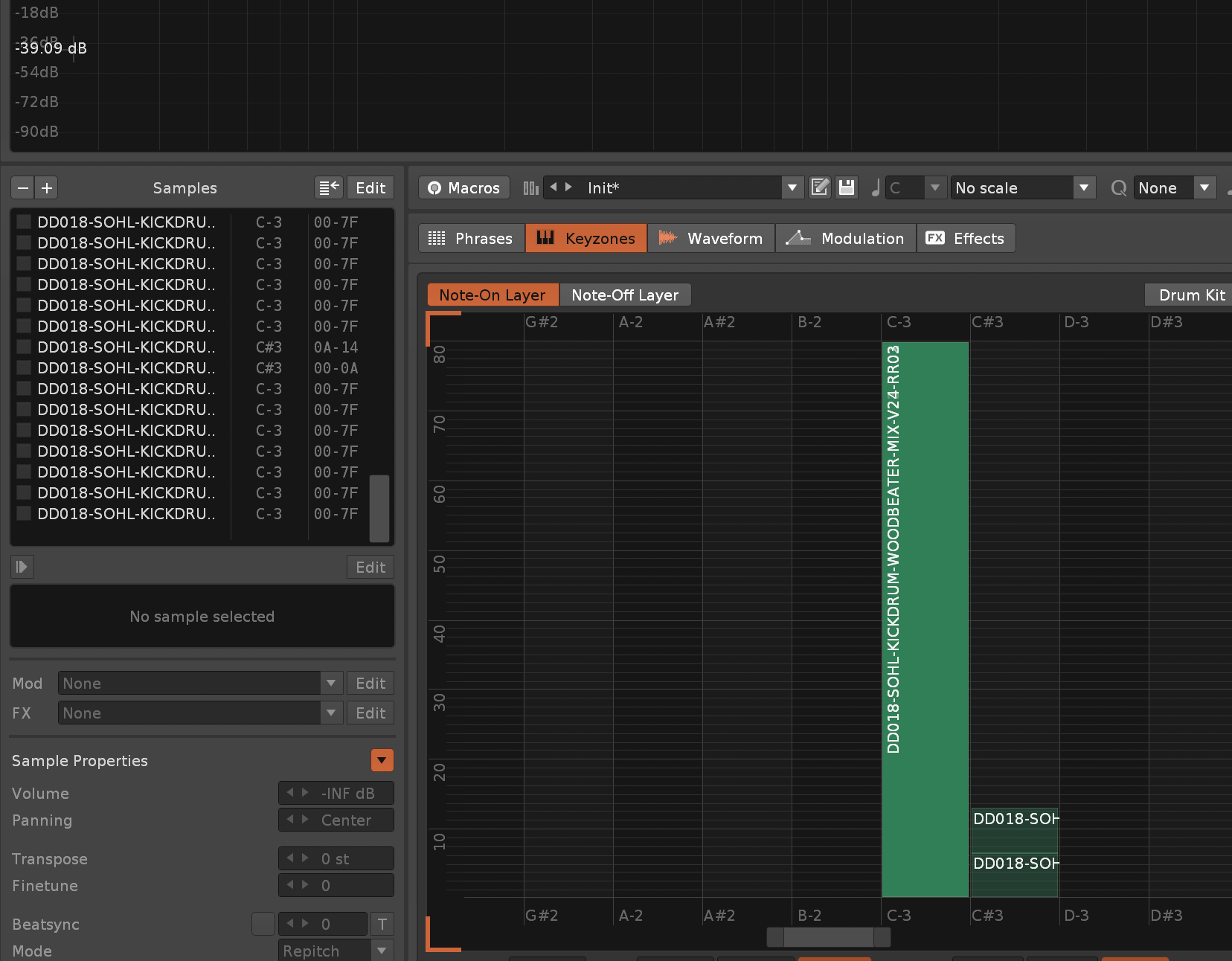 sorry if i’ve caused some misunderstandings

my idea was to distribute layers individually on c1 for example, so they don’t overlap…?

No. It is not possible to touch each layer independently from C1, if all samples have their layer in that area. There is no choice but to use more instruments for this. Or use a note for each sample (Drum Kit, to play with white keys).

Ah ok, I see. No, it is not possible to do that quickly. Yes through a tool.

if so, which tool?
i hoped there was a way because it’s really tedious work for creating multisampled instruments

Thank you for your time.

Yes, this is true. It costs too much time.

If you have several samples, you can do the above steps for speed, changing the two values ​​in the “Velocity” range (below the keyzones panel). It will be a little faster, than doing it manually one by one.

This is a very specific operation. A tool should be designed to be able to stack the samples according to the speed, establishing a speed range for each one. The API gives access to the range of notes and the speed range. I’ve been investigating this lately.

To my knowledge, there is no tool that does that. It would be necessary to build it.

I don’t know if the first step is possible from the API. Otherwise, all samples could be distributed, from the selected sample, as far as possible.

But there is a very large conditioner: It depends on the order of the samples in the sample box. Depending on this order, the layers will be stacked.

I’ve thought about this as well (the general idea of creating complex instruments more quickly) but had started on the path of a script (outside of Renoise) to generate the xrni XML and then zip it up with the wav/flac files. (Samples would be named such that the script would know what goes where.)

Did not get far : ) but it’s an alternate route if one does not want to do it as a tool in Renoise.

Please let me know if i can contribute somehow… i’m no programmer, but in-between devops/sysadmin

This is summarized in a problem of X-Y coordinates on a surface. Making a group operation is not complicated (iterate, repeat one thing over and over again for similar elements). The difficulty lies in offering the user the possibility of choice.
How do you choose the ranges (notes and velocity)? Probably the sample box will not be ordered, and there should be the ability of random selection.
A window tool could have a custom sample selector. But it turns out that the sample box can load thousands of samples (index of more than 4 digits in hexadecimal). I think there is no limit set here for the number of slots. The tool should be able to deal with that.

Apparently all this seems simple. But no. Renoise really already offers what is possible to do (select several samples when doing, in groups, to be able to define the area in two steps, width and height). Further than that, it implies that the user takes more steps by force. That is, the tool could not do everything automatically without a well-defined previous configuration, of several steps. So, I really don’t know if it would be worth building something like that…

i would imply simple logic just to override endless triggers/complex unecesary logic. It would be required from user to properly rename files either by number or some other order. 1, 2, 3, 4, 5, 6, 7, would go from 1 from the lowest velocity to top number - the highest velocity. How hard would it be to create tool like that?

That is, the tool could not do everything automatically without a well-defined previous configuration, of several steps. So, I really don’t know if it would be worth building something like that…

True, though for my personal case (when thinking about tools/scripts) I would default to a “good enough” configuration.

For example, I was generating a series of tones using hardware synths with the idea of collecting pitches into instruments. For layers I would likely figure out a good default and use it for everything. I.e., look at the sample file names, see how many samples are defined for a pitch, and layer them equally proportional.

If nothing else it would save many steps, and the results could be adjusted by hand afterwards.

Please let me know if i can contribute somehow… i’m no programmer, but in-between devops/sysadmin

I didn’t get very far : ) What I ended up with was generating wav files with sortable file names and then just dragging the lot of them into the instrument window. No layers.

But it’s something I may revisit.

Update: So I took another look. The XML is busy but there seems to be a bunch of boilerplate stuff that can just be used as-is (default stuff for macros, phrases). I think though for the loop values one needs to calculate some value unique to each sample. Probably duration in milliseconds (guessing right now).

Setting layer values looks to be just ints from 0 to 127.

Update 2: The LoopEnd value can be obtained using the command-line program sox.

You can use sox to get file stats, and when I tried it on the extracted flac file from a test instrument it matched the “Samples read:” value.

I don’t know what that actually means, but whatever, it’s obtainable. : )