I thought to increase the number of automatable parameters for a VST instrument. Now it’s limited to 1000 parameters, which is not enough in my view. 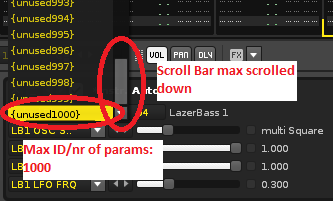 Creating a multi-timbral, 16-output instance, with 8 synths that use 474 automation parameters/ID’s, is now impossible to ‘plug and automate’ (8 times 474 is more than 1000).

It would be great if it would be possible to automate every ID in an instance, without limits. (unlimited number of automatable VST parameters/ID’s, or at least a bit more, like 10000 or so…)

Now it’s limited to 1000 parameters, which is not enough in my view.

This limit is coming from Reaktor itself, not from Renoise.

Renoise will show (and let you automate) however many parameters the plugin itself has actually published.

Linplug’s Albino 3 synth, for example, has almost 6400 parameters, and Renoise gives you access to all of them.