This things bother me about the intern RECORDER of RENOISE. I cannot REC something there or with - no signal no record no nothing at all. I have allready tried out all the settings and read the manual but I just dont gett it? How do you record a free played in VST Sample into Renoise using that THING?

Right now I actualy just use Voxengo recoders on my baddazzz old WIN7 computer and - this is what I not gett at aLL - With that one all workzz juzzt as expected and now troubles. Everything recs fine! Same Audio settings and setup of vst AND that is what I dont understand. 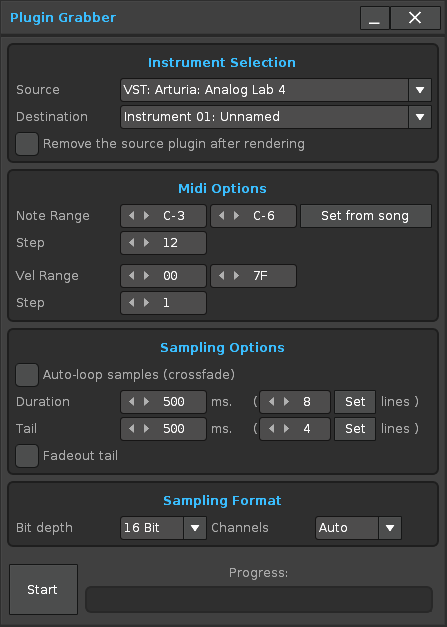 Dank @Raul But thats no what I mean but also a very good feature of Renoise.

I meant live recording of a vst inst and then use the rec new sampler but this doesnt work proerly or not with my soundcard or WIN7. Its buggin me because when I put the Echolooper on the TRACK it then suddenly recs the Echo out of that but not the direkt played notes and you cannot hear the loop after press REC. With Voxengo nul problemo and thats also buggzz me.

What PCIe audio card or USB audio interface are you using? I am using the Sound Blaster ZxR…

Both Renoise and Sample Recording are not ready to route the output sound directly with the recording input. That is, Renoise produces a sound, either from the pattern editor or produced when playing notes from a MIDI keyboard of an instrument with samples or with a VSTi (or both). This signal is the audio output. There is no way to route it directly to the audio input from Renoise. If this option exists, it would not matter the settings or limitations of the sound card (which you must configure from the audio properties of the operating system, out of Renoise).

The Sample Recording is only prepared or designed to record the audio input, mainly those external physical devices, such as a connected microphone (most common) or another sound production device compatible with the sound card inputs, an electric guitar?

Therefore, it is necessary to configure the audio input, depending on whether you use Direct Sound (with Windows 10) or Asio.

With Direct Sound (step 1), you must configure the “In Device” in Renoise: Preferences / Audio (step 2).
With Asio, you can change the entries that will appear in the “Sample Recording” panel (above the “No FX” list), depending on the sound card.

With this setting it is possible to record the already written notes of the pattern editor and at the same time the notes of the selected instrument (samples or VSTi) triggered from the MIDI keyboard via “Lo que se oye” of the audio input of the sound card.

The following configuration is similar. It is advisable to configure the input and output devices in Windows 7/10 before starting the Renoise instance. And throughout the process, never change any device in Windows 10. 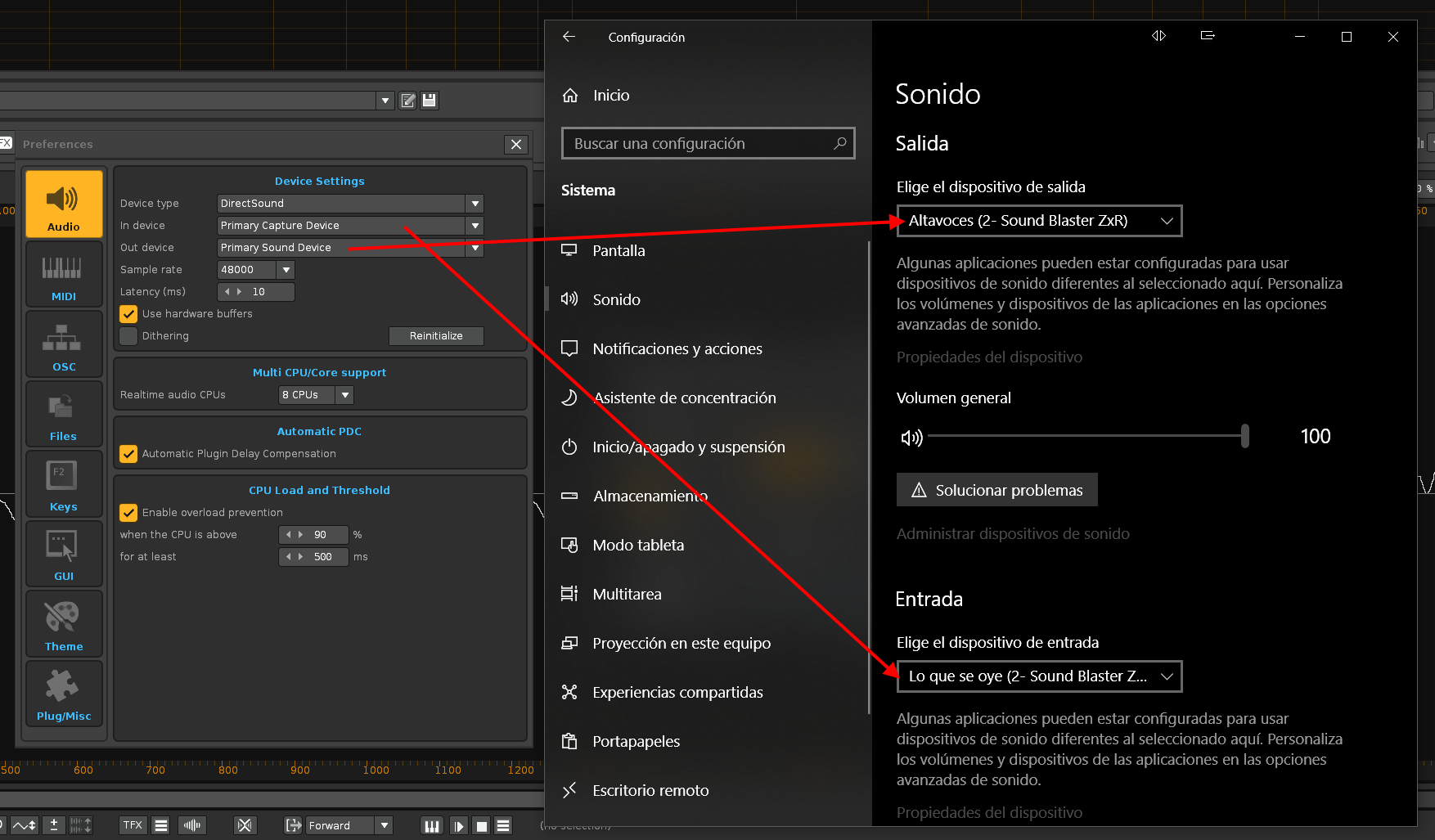 For some reason Windows 10 and Renoise do not get along with the control or change of devices, and it will be very easy for you to see a window like this:

Something happens or is wrong here, because the sound card is still working, nothing is disabled, and it is possible to use any other audio program in the meantime.

Therefore, all this “non-direct routing” is confusing, it will generate “Audio is disabled ???” If you manipulate any device in some cases.

Ideally, Renoise should have a direct routing of the audio output with the Sample Recorder input, even if it was optional, so as not to force the user to route the sound card from outside of Renoise, with the Windows options. I would call it “Direct routing” in a checkbox inside the Sample Recording. Simply, you should record what is being played with the MIDI keyboard on an instrument, be it samples or a VSTi, regardless of the audio input and output settings of the sound card…

As far as I know, it’s not even possible to use the effects of a track to record the notes you produce from an instrument using a MIDI keyboard to trigger them (or the USB alphanumeric keyboard, or a mouse from a tool through OSC, or things like that).

In my experience, if you want to actually play a virtual instrument or the sampler (and record that), then Renoise is simply (and sadly) not the way to go in general.

Hey thanks for helpin outt guyzz!!

Well the WIN7 is an old cheapoh ThinkPAD with Direktsound (No ext.Card) AND I didnt manage to pick up the Output anyhow inside Renoise with the Recorder. Than I tried out an old copy of Ableton Lite and in that you can playback n record and juzz play along - All fine there!!

But in Renoise no way to do it. Now two things that strange - puttin the EchoLooper//Doofer on the chanel yu wanto rec and then add the recorder, it pikkz up the Delay //Loop Signal and can Record a Sample inside Renoise (This is freakin WEIRD!!) but this works n than yu can cut it exakt afterwardz.

And also wierd is the Voxengo thing (only 32!!) Recorder becaus that one just works perfekt out of the Box?? So there is a Way to do it somehow because the Signal is around in Renoise - Maybe Taktik can do som Wizard laterz for an Update if this is possible to add.

Maybe Taktik can do som Wizard laterz for an Update if this is possible to add.

That is the subject.

It is not the first time that this topic is discussed in the forums and only @taktik can solve it. It seems very obvious that Renoise should be able to do it.

As it is possible that Renoise allows hundreds of routing of audio signals between samples and tracks and a single routing to record from the Sample Recorder is not available.

And like I said if Yu put the EchoLooper or my ext.SupaLoopaa on the Track and add the recorder - then play a few notes to fill the Loopaa first - then it will rec the played loop out of the Loopaa but without realtime Monitor but yu can see it is recording. The sample is perfekt created and yu juzz hav to truncate it but than its there. It is a weirdo teknik I hav to admitt BUTT this is what I want to DO - REC the loopaa JAMZZ and then make Trap loops out of it!!