Is this it for Renoise & Trackers as a DAW?

Did we Reach the end of what can be done with a Tracker DAW?

Throughout my Journey with trackers since 1996, Renoise delivered all that i could ask for in terms of professional music making year after year. Every big update was something very important and needed. (3.0 is my main DAW btw).

Renoise, imo has been the last bastion for what a Tracker DAW should and could be, with features that any music producer working within a Tracker should be happy and contempt with.

Now Sure, there are new developments and new ways to make music making in general easier, faster and more easy to use commands etc that would make Renoise a “better” tracker in terms of Quality of use.

But in my opinion, the reason Renoise has literally stopped updating is the fact that, you can not do that much more in terms of a Tracker.
Alright, 4k double monitor support, Small extra features that improve quality of use… but a 4.0 Renoise?
I don’t see a huge new update that could change the “game” for what a Tracker DAW could be.

In a sense, in my perspective, Renoise is a “Perfect Tracker” DAW… (in b4 PianoRoll).

Im happy with renoise as it is.

I guess the next step would be some sort of clip launching from the pattern matrix which could be recorded into ‘audiotracks’. That kind of thing might make renoise very CPU intensive so Id need a more powerful laptop.

I only really hope for small updates.

I want a toggle on/off button in addition to ‘oneshot’ button in ‘sample properties’ (for pad drumming).

I wish the vibrato, autopan and tremelo pattern effect commands would result in something which cycles in time with song settings.

I would like to have the option to have things defined in ticks and lines inside sampler modulation sets (currently only beats or milliseconds).

The global groove sliders should show the actual groove / swing percentage instead of going all the way to 100% (I think the maximum is 66% if I remember correctly, perhaps the maximum should be 75% - dotted sixteenths).

When you put a pitch envelope into sampler modulation sets…the selected points value goes to 1, and its quite difficult to determine exactly what value is one semitone…maybe should mark out the 12 semitones in the octave more clearly.

There could be an increase in maximum number of instruments? Currently only 256 (which is usually enough).

When you record automation with the right mouse button…you only get one take because if you want to let a pattern go round more than once, when you stop moving the mouse…the previous automation still happens, it doesnt record ‘no movement’ once the pattern has looped once already.

Some people have requested a dynamic EQ I think…Im only just starting to learn about EQing and stuff but I think its supposed to be useful for letting a kick come through a bass sound more clearly.

People wanted an update to automation lanes so that there would be more types of curves…any possible curve drawn with the use of tangent handles like the pen tool in illustrator.

Maybe some simple native synth? to prevent aliasing issues like when using single cycle waveform samples, although there is already the anti-aliasing button which works really well.

A pitch-shift which doesnt speed up the sample as you increase pitch? ( I dont really need this personally).

Thats all I can think of…Renoise is already so powerful as a sampler-sequencer and vst host… Its the best in the world for those things but its not the best for things like recording long takes of vocals or live instruments. Also its not the best for ‘live’ things I guess…live looping, stuff like that…

Its the difficulty of creating triplets in trackers that makes people reluctant about renoise because you have to count ticks across lines…also people look at the pattern editor and see it as ‘programming’ when it is really easier and better than pianoroll. Counting hexadecimal is not hard…halfway is ‘8’…but a lot of people still stuck on ‘why is halfway not 5?’.

The main problem is the 256 instrument limitation… this is a true fact that could make Renoise Better imo.
Totally forgot how the limitation of instrument/samples limited me in the past.

You can have infinite samples per instrument, but 256 instruments max.
Or rather, you can place as many samples as you want in the sample list per instrument…

The limitation is a problem of the renoise algorithm in terms of programming inputs surely… that could be a huge step towards improving a limitation into the modern era for sure.

The only time I ever needed more than 256 instruments was when I was building a ‘drum module’ for pad drumming which was built from more than 256 chopped breaks…im still doing this, its a long task…but you never really need that many for one song I would say.

The fact that there is a limit is a problem imo, limitations in terms of intrsuments is so ancient, we have powerfull enough computers to handle tonns of samples, the fact that renoise is based on a programming 256 instrument algorithm is the issue… i want 400 samples? that should be available imo

if you were seriously, crazily orchestral… like a massive orchestra…more than 256 instruments might be necessary …but for me the only time I ever needed more than 256 was for building a drum module

i understand that… but with guitar, vocal, analogue recordings and etc i do exceed 256 many times. The issue still stands.

It would be cool to have ‘as many instruments as RAM and CPU allows for’.

I can think of a couple of situations in which you might want more than 256 instruments now that I thought about it a bit.

You might want more than one song, inside one song file for a live renoise set

The entire point is, why even have a limitation?

The answer is, the Tracker Programming algorithm.
This is a general limitation of the 00 to FE, if you want to have a tracker feature programming and automation through a HEX code which right now limits it to a 256 integer, you need to rewrite the whole thing.

A great step to a 4.0 could be to unleash the daw into a limitless instrument implementation, which would require a whole overhaul and reconstruction of the base code i believe.

I get what you are saying about the limit to maximum number of instruments being a hex thing.

Something else about hex, I think the pattern effect command values were originally in hexadecimal to save space…like you couldnt have very wide columns.

I guess there is always the option to go to hex 1000 in future, with some wide columns…

But renoise is seriously one of the best sequencers in the world and it is definitely the hexadecimal thing that throws people off, makes them reluctant…

someone needs to do a big full review of renoise, like a 10 page review in computer music magazine or something but, honestly, I think the hexadecimal thing confuses the reviewers too.

I really want to see renoise 4.0 someday, but I understand its hard work and I am super happy with it the way it is now…the thing about renoise is that it is very efficient, you never get any bloatware bullshit, everything is well thought out whenever an update comes

The main Thread question is, How could we bring Renoise to the next level?
Obviously the first thing that i noticed was the Limitation of the 256 and the 00 - FE instrument/sample limitation.

Other than that, I cant really see any other MAJOR improvements for 4.0.
The limitation is the major thing. The smaller things are just “Quality of Use” which are nice surely, but that isn’t ground breaking.

The whole pianoroll thing is not necessary in my opinion

Piano roll or “Left to Right scroll” instead of top down is just a Preference imo.
That doesn’t really expand a Tracker. We really need a solid and positive improvement for musicians.

You brought up the limitation of 00>FE. I would love to see that broken and expanded into a limitless samples/instrument value. This is the only thing i myself have suffered from.

Other than that, i cant see any other MAJOR improvement overhaul tbh except small improvents of “Quality of Use”.
Surely, Automation and external into Internal things could be improved hugely… these things would be welcome… but it would still be a tracker 256.

The crossfade renoise would be extremely RARE, as most artists, even me that has used trackers since 1996… would still use Ableton Live for Live shows tbh… Renoise is not really meant for live with it’s very deep programming imo

For a while now I’ve been thinking we need something higher level than the pattern sequencer. It gets kind of crazy once you have 40 tracks and you’re trying to re-use sounds and make new tracks so on. I tend to end up with a big mess where there are tons of ugly gaps making it a pain to navigate horizontally. pic related 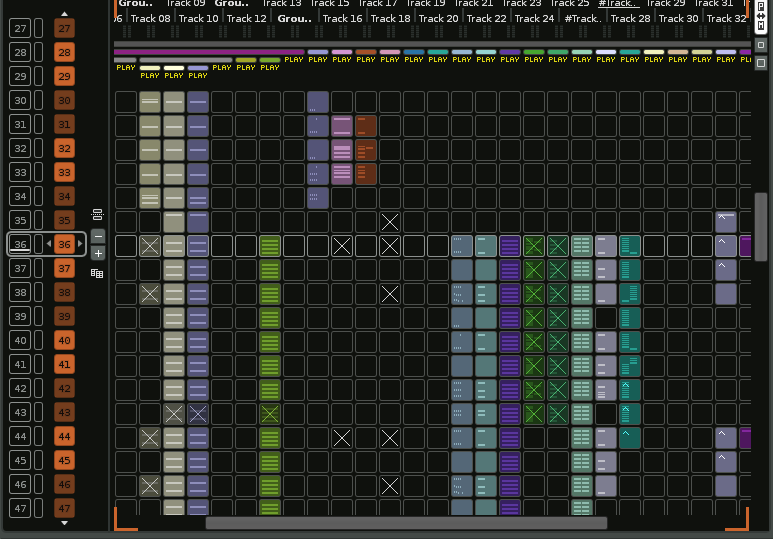 I’d like to see an “arranger” view, which would allow you to cull tracks and instruments out of the main pattern sequencer during different sections of a song. Each section of the arrangement would effectively be it’s own little xrns, but with the ability to share instruments and tracks. Would also be cool to be able to load up different xrns’s into the arranger to render a full album or something like that.

For me personally, Why not have the Entire window of the Patterns be able to unlock from the Renoise Window Into it’s Separate Window that you can Hide, Resize or close.

Modular Renoise Would be a Huge update, Where you can unlock the Tracks, the OSC and DSP windows and float them how you want in multi monitors.