Is this it for Renoise & Trackers as a DAW?

The new update would enable you to move every element of renoise as you wanted, wherever you wanted to… https://imgur.com/a/VSy3UUq

Have you ever seen screenshots of renoise in which every track is a different colour?
How do you do that? like the one below. Looks pretty cool 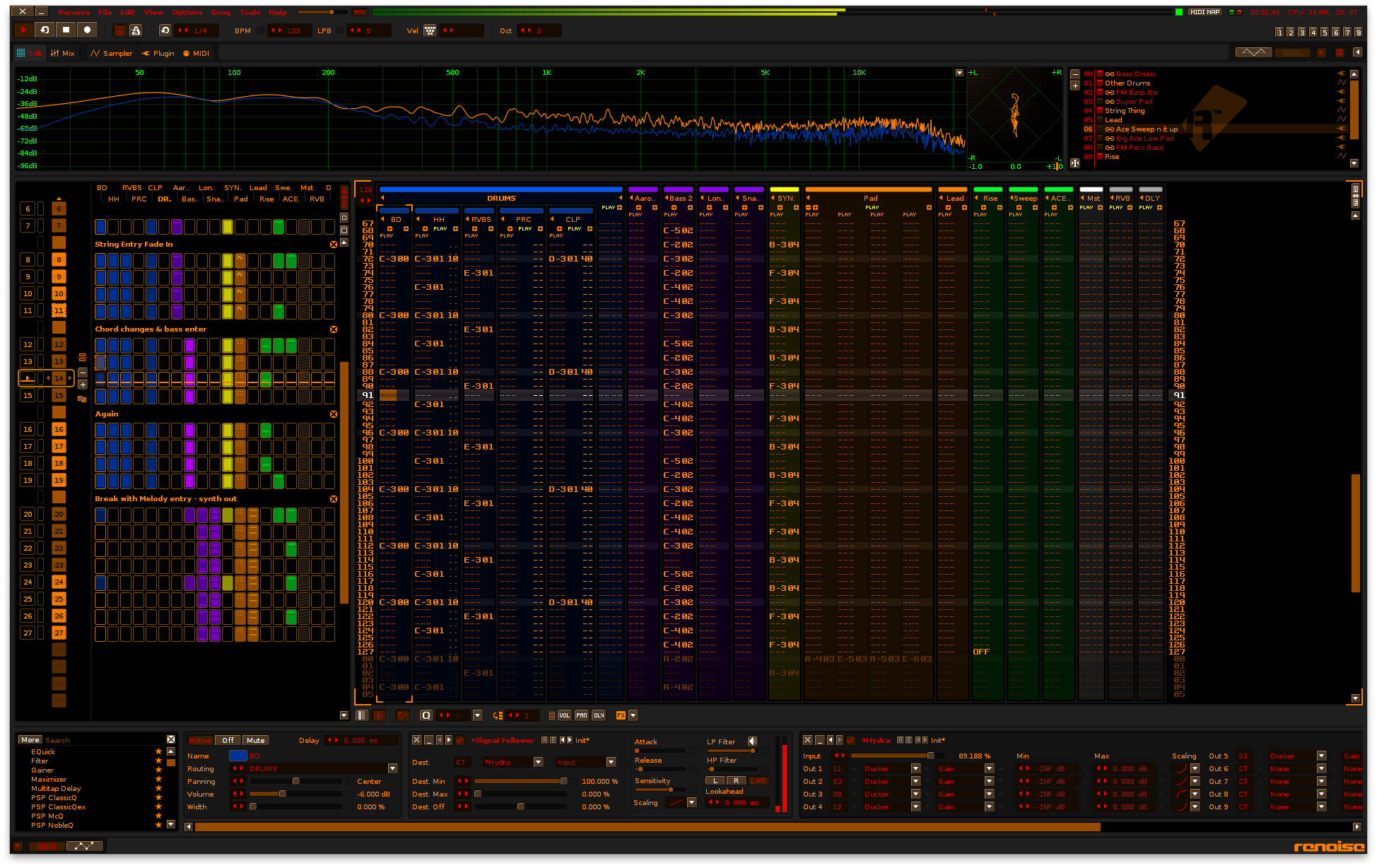 Did we Reach the end of what can be done with a Tracker DAW?

Just keep in mind that whatever the people in this thread decide/argue that the next ‘big thing(s)’ in the Renoise tracker should be you are probably going to need a dedicated programmer (or even a set of programmers) to start a new fresh project from the ground up. Quite a task. However if you do decide to accept the challenge, @taktik has suggested that he could help/(be a consultant?) on your new project. You can read the post here from the man himself: Remove pattern boundaries for automation (or patterns in general) and instruments (bind each track to an instrument)

he just said if you think you have outgrown renoise and maybe want/need something new. why not start your own projekt to fulfill your own needs, not that he would assist or help you with that.

Oh? If you read further up that topic…

So why don’t you take the chance to either start a completely new tracker project on your own, or look for a project on github and co which isn’t that old and mature as Renoise is? It’s a lot more likely that you can realize those ideas there. If it helps I could even contribute to such a project too.

have you ever tried to read between the lines @4tey_guest ? let us know when you started with this new projekt, why not make start something new and there are other good with programming too in here and also me with my doofer skillzz could help you out.

Maybe support this project if you don’t think Renoise will cut it? http://zytrax.org/

Full source code is available under the permissive MIT license. If you like it and want to contribute, feel welcome to do so!

have you ever tried to read between the lines @4tey? let us know when you started with this new projekt, why not make start something new and there are other good with programming too in here 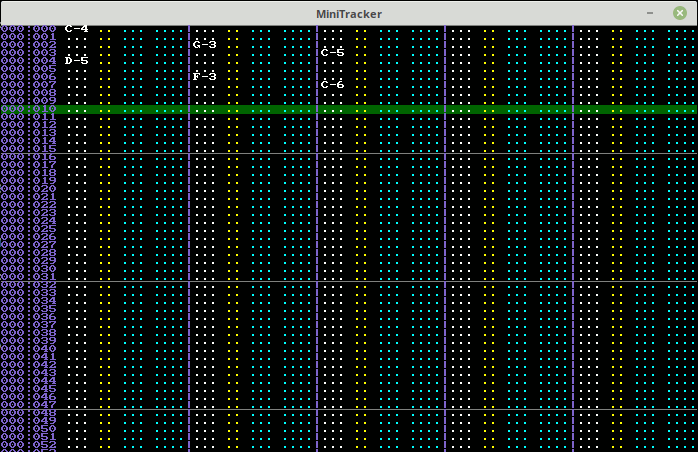 It plays a simple text file (with a green play line).
It’s largely pointless to everybody…(but myself) No secret hidden Renoise crushing project

I like the Zytrax idea of a tracker without hex.

I think before Renoise can “rivial the other DAWs” or get to “the next level”, it first needs to actually catch up in some areas. For instance, Renoise could be brought on par with the features of hardware samplers from 30 years ago (e.g. sample start/loop automation, zone crossfading, sample groups). Then with features of software samplers and DAWs from 15 years ago (e.g. timestretching, pitchshifting). I personally would rather like to see this kind of development than some new features that try to stretch the tracker paradigm.

I think something very consistent with what Renoise actually is would be to add some more sample mangling features to the sampler à la octatrack. At least the ability to modulate the sample reading head, wich kinda is there because you can do it with FX but not with modulations. Modulating that with an LFO and then controlling LFO’s speed from the tracker would be destructive. It would also repurpose the whole system as an excelent wavetable synth with minimal changes, since the other modules are already there.

In general i think’s there’s lots of stuff to steal from the Octa. One feuture of it that really interested me is the posibility to start and end recording with sequencer commands. This would be truly aswesome for live playing.

Granularity and Pitch Shifting/time Stretching would be great, but i think the would be more work intensive, the other proposal would be easiear and add lots of posibilities, combined ith the tracker interface. Also, in many situations they can be replaced by musicianship (you know, just playing in time).

Another thing that would be great would be some minimal set of live playing oriented features. I’m still to find a satisfying way of recording a phrase and immediately having it playig. For example if you are jamming with more musicians to capture a phrase and return it, or keep it as a background and play something else over it it or mangle the shit out of it. Also, find ways to get the amount of processes that stop the sound engine to a minimal, for example slicing. I’d rather wait a little more than seeing the whole show stop (again, it can be directly used with FX, but it requierse an ability i still lack). I think this would also be doable without lots of effort.

what do you mean by sample groups? (mute groups?)

sample start automation is pretty much the 0S command, although it cannot be done in automation lanes in any way as far as I know.

zone crossfading - surely there must be some way to crossfade between two samples in the same instrument, which are placed on the same key in keyzones…maybe with the new mappable ‘modulation wheel’ slider to the far left of the keyboard?

it was discussed in 2008 here (if anyone knows how, id be interested to know how sounds like a cool thing to do):

Hi …I am a huge (ab)user of the ‘draw waveform’ feature inside renoise …So I had this ( dare I say it )amazing idea Ok…here goes …we all know the beloved ‘prophet vs’ or ‘korg wavestation’ …where one had the option to move between different waveforms by volume crossfading ( example : the amplitude of wave x decreases while the amplitude of wave y increases …and all those interesting things i bewteen . So I was thinking what about the opportunity of loading different ( single cycled ) waveforms…

There are only two things I’d really like to see added in Renoise: timestretch (there’s a plugin for it, but it can’t be used in real-time) and tabbed projects, i.e. having multiple projects open as tabs in the same window (see Bitwig). I like to work on multiple songs at the same time, and copying/pasting things around from one to another, which is very awkward to do in Renoise currently.

tabbed projects would be cool.

I personally think there is a still a lot of room for improvement when it comes down to quality of life, and especially with the sample editor section. pitch-locked time-stretching would be awesome as previously mentioned.

Ability to loop your preview selection in sample editor (would speed up workflow tons for dialing in loops, even one shots to make sure you dont pop on a transient,single cycles etc.). Super quick way of dialing in new layers for an instrument. I added this idea recently, hopefully it finds its way in.

what do you mean by sample groups? (mute groups?)

A container with its own modulation set affecting all members in the group. For instance, when you create a kick drum by layering 3 samples, each with their own modulation, you want a quick method to change global settings of that kick drum (e.g. attack and release of the whole 3 sample creation).

sample start automation is pretty much the 0S command, although it cannot be done in automation lanes in any way as far as I know.

Not really. You want to map velocity to sample start in order to create realistic sounding instruments. Currently this is not possible.

the one thing I’m disappointed is my Roland MX1 mixer soundcard doesn’t like Renoise.