The preset i’m using in this plugin is bpm synced. Maybe there’s a problem, if the plugin tries to communicate with Renoise to read out the song position.

I tried it also with my other DAW’s to test, if it’s a bug in the plugin, but in all the other DAW’s i tried, it always triggers correctly in time.

Hello. Could you share a little example song with us which demonstrates the problem?

I tried to replicate this issue in a new simple song. But i can’t replicate. All works fine in a simple project. My project, where thiss issue occurs has a large amount of tracks and VST instruments and VST fx. Maybe this issue comes with large projects.

But i don’t think that performance problems cause this issue, because the project runs maximum with 25% DSP/CPU at the moment and i also have more than enough RAM.

Maybe it’s a PDC issue then. Only happens when there are some other plugins present which do introduce latency?

Something weird is going on here. I opened the PDC info to have a look and all plugins are listed, but exactly this Stutter Edit plugin isn’t listed…

I made snapshots of the PDC info. 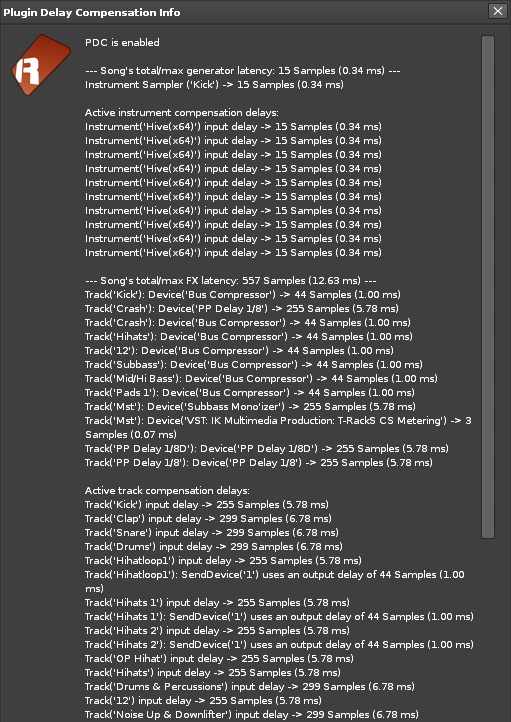 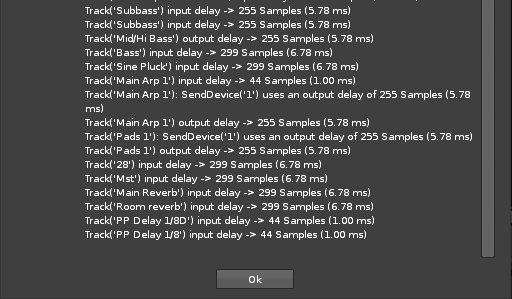 Something weird is going on here. I opened the PDC info to have a look and all plugins are listed, but exactly this Stutter Edit plugin isn’t listed…

The dialog only summarizes latencies that specific DSPs are causing and the resulting compensation delays. Stutter edit will then not introduce any delay and is not compensated by another instrument (it’s an FX), but it still may be affected by delays from other tracks.

Ah, now i see. I think i found the track, which causes the delay (marked red in the picture): 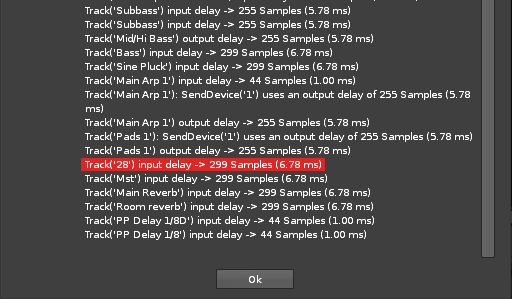 The plugin runs with a VST FX alias, which will be triggered by the notes of exactly this track 28. But i wonder what causes the delay? This track just contains the notes. No fx devices or vst fx plugins are running on this track. Just the track with the notes and an empty fx chain…

Or maybe it’s even the plugin, which causes the delay of this track?