I want to buy a new (2nd hand) laptop to run as a dedicated Renoise machine, including for live shows.

I don’t have huge projects, usually only about 8 tracks, and no huge VSTi synths, so when I’m writing tracks CPU isn’t an issue; BUT when I start manipulating tracks live with effects like repeaters, rapidly switching between patterns, with a live audio input through the soundcard, and with a couple of mid-weight VSTs running, it starts to get a bit dicey. There are stutters, crashes and general weirdness.

SO: spending as little money as possible, what specs should I be focusing on?

for instance, I can buy a refurb Thinkpad (good solid machine physically) with an i5, 4GB RAM, 250 GB HDD for a good price. In fact, that’s what I currently use. What’s likely to be the limiting factor in my current setup? Where is my point of failure?

Yeah, that definitely makes it worse, but I still get some problems without it…

The " i" range of processors has existed since 2008, you really shouldn’t just look at that (you shouldn’t look at that at all really and compare each part one by one by selecting the maximum budget you’d like to spend). (google keyword: “benchmark”)

Since it’s a laptop and refurbished and it has 4GB of ram and a 250GB HDD, it might actually be made from somewhere at a time. The situation in your region may differ, but in my experience, older/second hand computer hardware is never worth it.

Picking the right parts is a touchy subject and depends on what your exactly doing, butas far as daws are concerned, the general rule for everything is having a more powerful cpu is the most important asRAM is cheep and often (we are speaking laptops only, there could be maximum amount limitation already with the RAM that’s there) upgradable/replaceable to a larger capacity.

Maybe you could supply and xrns and we could estimate your needs.

More power is always better though when you decide to have more things in your tracks and are not using track freezing etc.

For people that have zero understanding about computers and are not willingto learn/care (there’s less info you needthan in the renoise manual and a lot of the opinionated stuff can be discarded), I suggest the power adaptor method of picking laptops, pick a price, make sure that the laptops you choose from are no older than ~1year (you’ll need to google, not ask the clerk) and pick the one with the biggest output amperage rating (take voltage into account too if it’s different, I don’t remember if we’ve standardised it yet)(it will be visually bigger as well)

That way you will avoid some the buying issues that I’ve seen people like that often come across.

I agree with running diagnostics, especially on the RAM and HDD. If your crashes are bsod’s it could very well be a RAM problem.

SSD’s are absolutely amazing and I highly recommend them, however, Renoise doesn’t stream from the disk, it just loads everything into RAM, so the only thing an SSD is going to do for you is speed up initial load times and save times.

RAM is something you’ll only need more of if you’re running more stuff (more samples, more plugins). IMO it’s more important to have good RAM than to have lots of RAM. 4 GB is a bit low, but 8 GB is plenty in most situations, but if it’s not DDR3 or better I think it’s worth upgrading.

Wait, so are we trying to fix the problem or trying to suggest how to buy a computer (btw, get a laptop if you have to, not if you’d kind of like to)? you need to be specific here :Pas the process steps are radically different.

Since no current computer specifications were posted I was thinking the latter.

@Headphonecue: it is, that means an i5 could have been built 7 years ago or yesterday, that is a very large margin of error for performance, so should not be considered on it’s own.

@head: tiny bit faster processors don’t cost nearly twice as much, outside of the eccentric exceptions

post says: I want to buy a new (2nd hand) laptop to run as a dedicated Renoise machine, including for live shows. then goes on about which parts he should be looking at.

I’m still going to believe that is what the thread creator wants, not fixing the issues on the current one.

If there are glitches in audio, there’s a lot of possibilities where they’d come from. Non-trivial to tackle. You could look for documents referring to tuning your system/os for “realtime” i.e. “low-latency” operation. You should also be able to find guides regarding such operation for audio purposes. But there can be so many points in the line, that it’d be hard to tell where the major culprit or how steps could be done to fix it, if there ever is a chance of fixing it for your software/hardware/operating_system.

Some Hardware is more happy with stable rt performance, other hardware can suck at it. I think there is no reliable source on which laptops would be cool for low latency action. CPU/Ram power itself is not so much category for having realtime stability, as long as you don’t overload capacities. Tuning stuff could go to great lengths of modifications to the system. With Linux you have more technical options, but it’s quite some demanding task to understand what you’re doing, testing if it’s nessicary, or whether it’s going to help or even make things worse. If hardware is solid as rock, no disturbances and a cool sound chip, and stuff bogs out anyways, I wouldn’t say it’s “faulty” hardware, but just the os doing shit in the background or even the daw or plugins you’re using unsuitable for realtime action. Or Soundcards not suitable for low latency stability, even some system bios doing nutty stuff in the background breaking all kinds of dropout hell loose. Yes, also there are crap plugins generating bad cpu load spikes that can make drop outs at low latencies. I also have some shitty feeling that renoise itself is not so very extremely much hard realtime stable at low latencies.

Thanks, (some of) this is useful.

To clarify: I have a laptop that’s fine in most use scenarios, but isn’t quite stable enough for live use – which is a problem, because I play live a lot (which probably rules out a desktop). I don’t get BSOD, but I do get total freezes and stuttering. CPU meter usually looks OK – not often above 60%.

I’m looking to upgrade, but don’t have nearly enough $$ to get the machine I_should_have. I’ll probably end up with something that has similar specs to my current machine. I have to prioritise – if I could only afford to improve one thing, what should it be? Would upgrading the RAM on my current machine be a worthwhile investment?

As you can see everything in this field is by result of design, quite opinionated.

So just choose whichever opinion feels good to you, it’s a good way to learn.

But as a simple proof that cpu is the first thing you should look at (as you still haven’t given us a xrns and the specifications of your current computer, to havea good idea of what you’re using, that can give so much more info, and there are a lot of possible reasons for your issues), go into the power settings and set the power settingto high performance. (btw, might fix your issues)

That aside, give us an xrns and the specifications of your current computer and the renoise log, just for good measure.

I don’t know…60% max sounds sane, but you’ll have to consider that sometimes kind of stuff needs to be done “out of schedule” by renoise and/or plugins, and then raising latency can already help a little to smoothen it out. More cpu power plus ram speed can help too, ofc.

Yes, what kind of driver/soundcard are you using, what latency settings? On crap hardware you can’t expect stuff like 4ms to work.

If we are trying to fix the computer instead of buying the new one:

the reason could be:

Anything gui, (which includes tools) slowing down renoise

Reaching the limits of your audio device, for example lowest latency with highest sample rate

Something else using up the resources

but it’s all just guesses

Let me say for the third time

dxdiag data, you can get it from windows logo - r (on your keyboard, that will start the Run program), enter dxdiag, press enter, then enter again when it asks ou about driver signing, then click Save All Information at the bottom right corner of the window,

renoise Log.txt, you can it from C:\Users\ your username \AppData\Roaming\Renoise\V3.0.1

config.xml from the same folder as the Log.txt

I would say less is more, i have a live rig i play gigs from a single laptop for about 8years now, it is shitty amd dual core with 2gigs of ram,it is cracked in half and monitor is tide up with shoelace but it never failed me, prepare your projects with maximum lightweight. What i mean is u dont 100% beast of your rig, do things right and you will be rocking smooth ;D

I’m not very into computer hardware these days, it’s a jungle of parts and two seemingly identical parts can be totally different. RAM must be optimal for the system and placed in the right order and what not, so there is no one fits all. A 4GB RAM can be more effective than 8GB RAM, depending on the speed, compatibility and how much RAM you’re actually using.

In Win7 at least there is a performance test you can run and get an indication of what your system is capable and where the bottleneck is, you find it on the right in the ‘Games’ folder from the start menu.

SSDs are delicious things. Fast, silent, low power consumption. I find it hard to go back to systems with only HDDs, but they are still part of the components that drive the price up. (They’ve come down a lot, though.) If you can wing it, I’d definitely recommend getting something with a SSD.

doubling the RAM helped a lot, but the SSD makes this thing a damn speed demon. now if i could only increase the screen size…

really the bottleneck most people have is their HD. SSD’s are the shit. can’t recommend one enough! 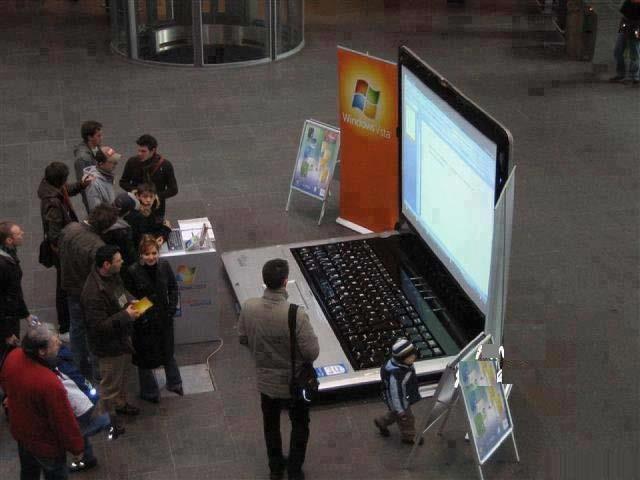 Does your system heat up a lot ?

are you connected to the net while performing ?

Just a few things that might influence the performance…