Looking for someone who can create a renoise tool for $$$

Oh sorry, didn’t catch that. Maybe someone knows the author and their forum handle, so they can be contacted?

hopefully , i already tried to contact no reply so far.

After a quick search it seems to be @frenetic_friend, but I don’t know if he is already on the forum or into Renoise stuffs?

The topic about this pianoroll tool is here.

Have you checked out @Raul’s tool here: https://ulneiz.es/renoise-tools/piano-roll-editor/

It’s a middle ground tool, so it’s not quite the same as using a piano roll in a typical DAW. Plus, it’s got a lot of options you wouldn’t find in Renoise natively.

I started the project last year but after I found free Cakewalk I decided to stop my development. Current Renoise API is great but for good piano roll we need more (canvas, tracking of mouse position and left mouse click, direct audio without OSC). Today it is possible to create something between matrix (or step sequencer) and piano roll but why… 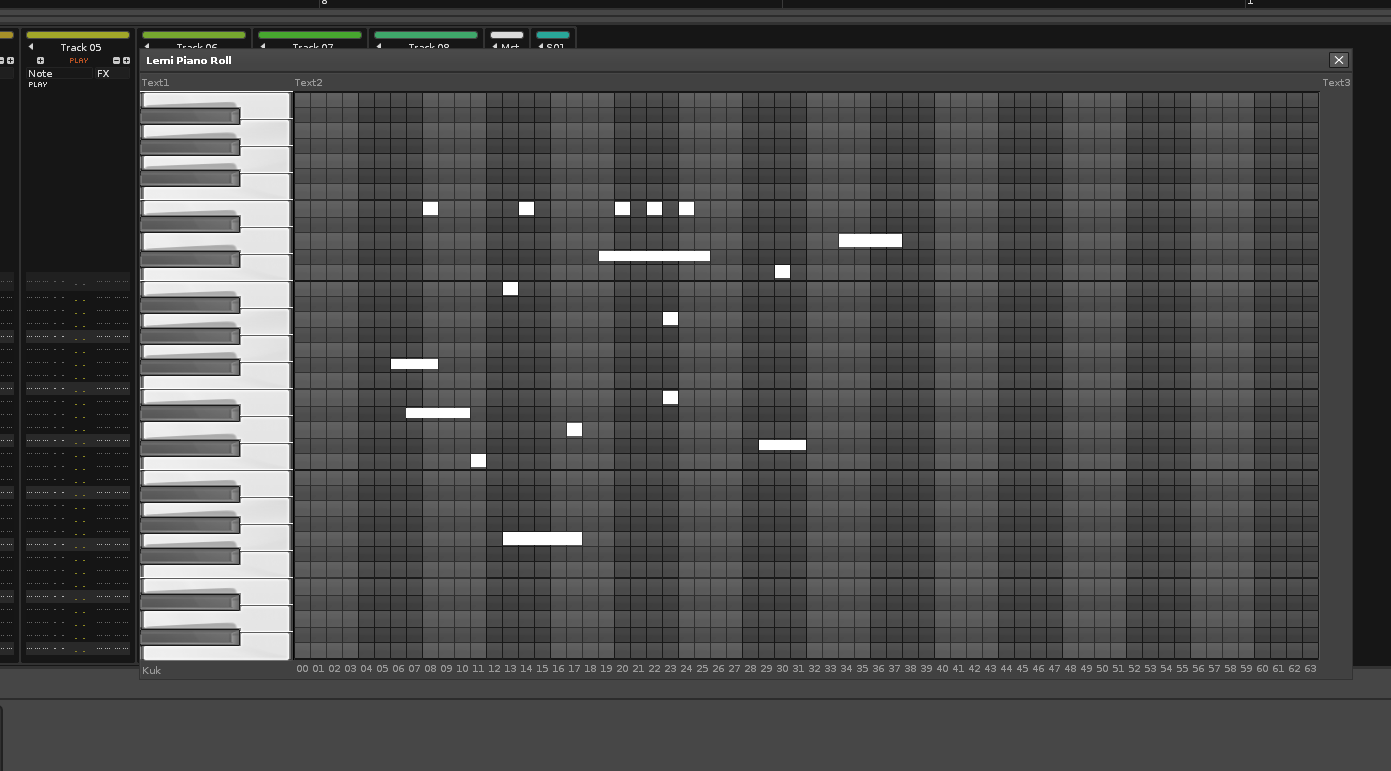 Did you make that ? That is beautiful

Is it possible to continue that project and bring it as close to do what a simple piano roll does ? No velocities, quantize and automations inside ,just to be able to compose horizontally* from 1/1 to 1/32 lengths in grid and note lengths ,snap to grid ,and octaves from c0 to c6.
Would you like to talk about it in some messenger?

Frankly to say, not now. Unfortunately, it is not work for hours but for days, maybe weeks. And I am 44 with small babies and lack of free time :-/
I would like to have a good piano roll inside Renoise, as you. Roll is very neat and useful for the off beat composing. But too much work and as a result we get semi piano roll with some limitations and bugs because with the current Renoise API tracking of mouse position will not be precise. I need some enhancements in API to get better result.

If you use Rewire and Bandlab Cakewalk you will get great piano roll for free. And this is the reason why I chose to stop my development. Give a try…

But never say never. If I have more free time maybe I can continue. Time will tell.

Unfortunately, it is not work for hours but for days, maybe weeks.

I’ll just mention that it is also possible to write the piano roll GUI front end with a 3rd party language/library/java/C++/python/malbolge…whatever and just use Renoise lua to transmit/receive the track data to/from Renoise via a network socket. That way you should gain control of mouse events and a ‘canvas’ area to draw to your hearts content. More work? Yup. Why don’t you write it then? I don’t feel the need for a piano roll in Renoise. But it is kinda doable to get something out of it if you are really dedicated to that type of thing. 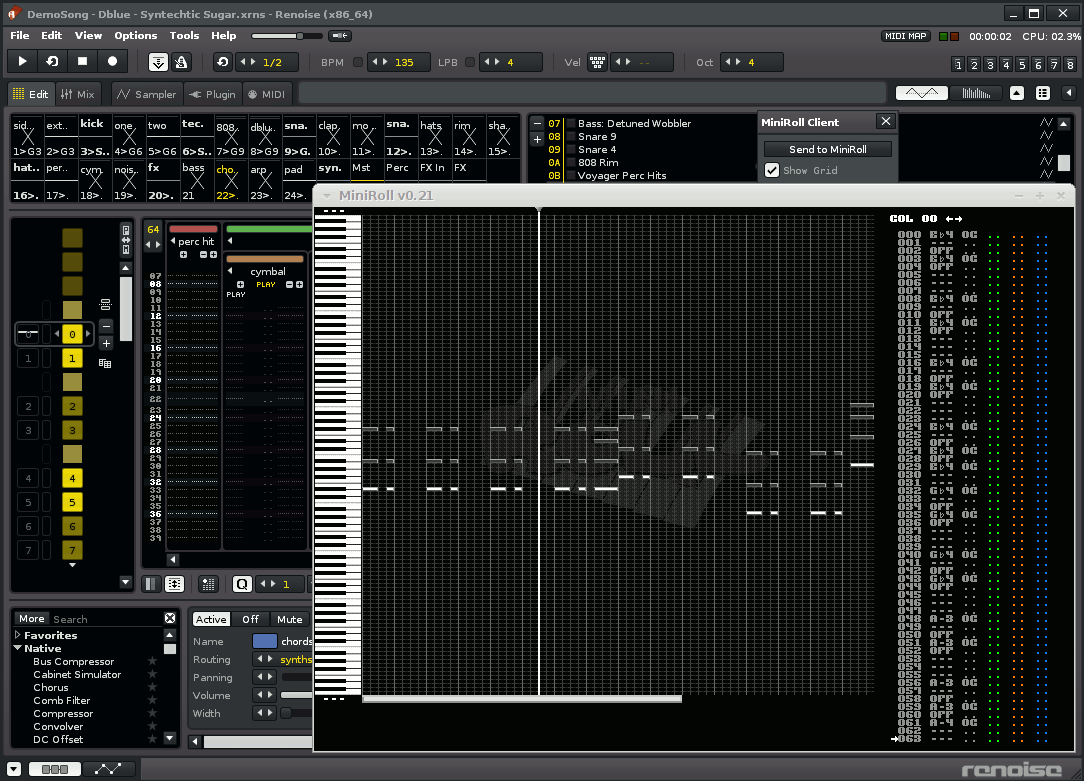 +1. The viewbuilder is a bit limited, and even when abusing it you will be forced to make compromises. My evaluation is that you will end up with a piano roll that never quite will bring the ease and workflow that is expected from a piano roll conventionally.

Electron might be a good option as well. But eventually, all of this raised the question: “wtf… isn’t it better to use rewire and put some tracks where i really need a piano roll in the other daw? and mix in this daw…” It’s not ideal in all ways, but my answer to this was a yes.

EDIT: A VSTi piano roll would be very neat (“midi generator”). That minihost modular didn’t quite work like that last time i checked (?)… bummer. Maybe there are technical reasons (transport) to why that idea wouldn’t work.

EDIT2: With electron you can make it look almost native to Renoise

EDIT3: Another abandoned project. The inevitable lack of keyboard+mouse workflow would never make it a comfortable enough roll for me. https://www.dropbox.com/s/ljiei7jvs6hbym7/gui1.gif?dl=0

Yes, I agree with you Joule.

What is the Electron? LUA Library?

What is the Electron?

Quite easy to use.

Mini host modular has a piano roll in case you missed it.

I see. Thank you.

As you mentioned, it doesn´t matter what we use, C++, Electron, Lua, the result will not be as good and seamless as we want.

The current Renoise API doesn´t allow what we need. OSC is a nice feature and a way to get what we need, but it doesn’t make sense to create a Renoise plugin and use unsafe network protocol to communicate with the Renoise sound engine.

If I were you, I would contact Taktik and offer your money for his possible additional development on the API.

What we (as developers) need for piano roll? The priority order from my point of view:

but it doesn’t make sense to create a Renoise plugin and use unsafe network protocol to communicate with the Renoise sound engine.

I agree. You wouldn’t implement it this way. But at least lemi I got some result from Renoise doing it that way

Yes, of course. The end justifies the means!

Alright , understanding that this is nearly impossible due to the API , and also me budgeting the API development is probably not realistic… I’d give 1 suggestion and 1 alternative solution.

The suggestion is as I said to 4tey also , since you guys have taken this piano roll to some point with your projects and you’re unlikely to continue with it , make it available to everyone so maybe someone else can continue your work at some point , don’t let those projects just die out.

Moving on for now and as I read in another post , is it possible to have a tool that copies midi notes from one daw and pastes them directly in renoise correctly ? With 2 daws open ,without having to rename, export and import midi clips which is a tedious thing for me personally …enough to kill the vibe and creativity going.
Is that achievable ?

The current API is not aimed at the complex plugin like a piano roll. As Joule and 4tey wrote, we can use a different approach like developing a standalone application that communicates with the Renoise engine but in this case, it is better to use the power of Rewire communication and use what exists than to “reinvent velocipede”.

I don´t think that the basic API functions we need will cost a big amount of money. Let’s say we just need additional GUI functionality I mentioned and we can use the OSC server for sounds. From my point of view, it is a matter of 2-3 full days to make these API functions. If you can and you are able to pay this additional development, I suggest asking Taktik. When we have these needed functions I believe there are many skillful Renoise plugin developers that are able to complete good piano roll.

I think many of us are willing to complete our incomplete tools but with more support from the Renoise API side. If we release our source code it doesn´t solve the situation because we all fight with the same API limits. Yes, maybe there is a genius that finds a way how to overcome all missing functionality for Win/Mac/Linux but I doubt we find him/her. And when someone finally finds a solution it will be more CPU hunger than a direct way. I don´t like this programming approach.

Why copy MIDI notes? As Joule and I wrote, use Rewire. It will solve your needs in an elegant way. Moreover, you can find a 32b/64b Rewire bridge that works and can help.

I will detail some things that I think are necessary in the API to address this issue: “create a horizontal Piano Roll”.

Main things for the API

With the API6 and these 3 additions (only 3), it would be possible to create a Classic Piano Roll, like those that some people want with their blocks, drag and drop and all that.

Secondary things for the API (by difficulty level to implement)

Secondary things would help to obtain a better GUI.