When I load the latest version of Softube Modular VST in Renoise 3.2, I nearly always get this error dialog after the initial loading pause completes and the VST’s window appears: 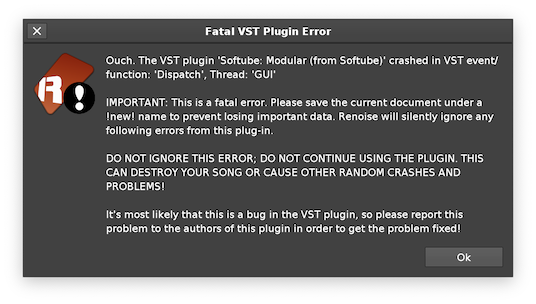 In my testing, this typically appears just after loading the plug-in, but occasionally, it doesn’t. In those cases, the plug-in was usable, but the error appeared when I saved the Renoise project or right-clicked the stop button to halt all DSP and devices.

Running plug-ins in a sandbox had no effect, nor did toggling the options that are accessible via the [?] button. The VST loads and runs without issue in Bitwig.

I reported the issue to Softube. Unfortunately, Renoise is not one of their officially supported DAWs, so tech support isn’t available, but at least they’re aware of the issue.

Has anyone else experienced this problem?

I upgraded to a new machine, and the issue no longer occurs.